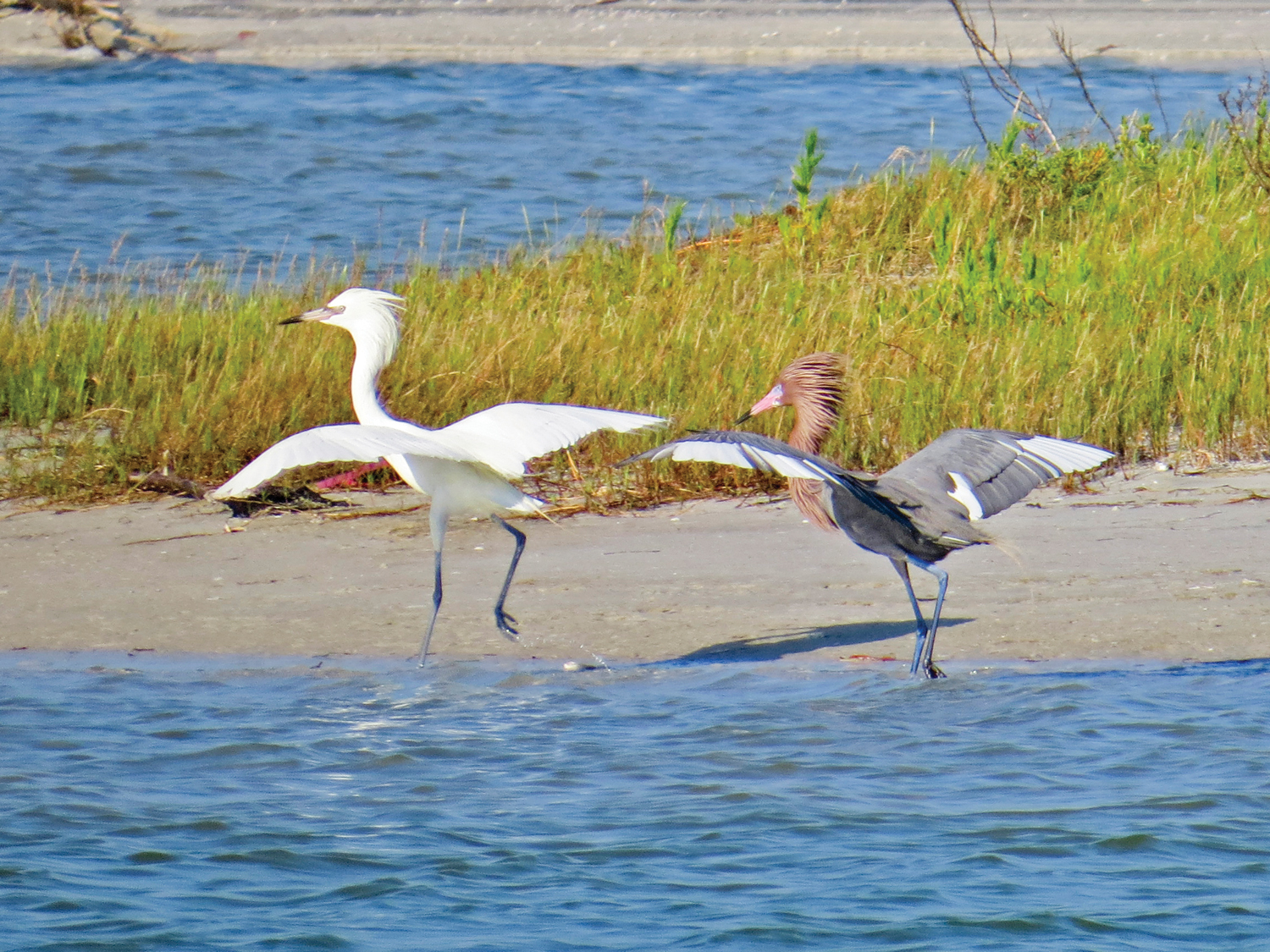 The reddish egret, Egretta rufescens, is a conspicuous shaggy-necked wader of coastal margins, more tied to salt water than any of our other herons or egrets. Standing two and a half feet tall, weighing just under two pounds, and with a wingspan of up to forty-nine inches, E. rufescens is a medium-size contender of family Ardeidae (the day herons). It is notable for its two color morphs, dark and white, which are evident from as early as the downy chick stage. The dark morph has a red-brown to dark cinnamon head and neck and slate-grey to blue-grey back, wings, tail, abdomen, and belly. White morph birds are entirely white. Among the dark morphs, there is considerable individual variation in shade, possibly seasonal. Some dark morphs have a few white feathers (usually matching flight feathers or random patches), but there are no reports of white morphs with dark feathers.

In both morphs, the irises are straw yellow, set off by dark lores (the region between the eyes and nostrils). The bill is dusky-pink with a black tip. Legs and feet are blue-black to black. The shaggy neck is also distinctive in both plumages, especially during breeding season. Mated pairs may be of the same or different color morphs, and broods may include either or both morphs. Over most of its range, dark morphs are far more common.

Egrets and herons are currently classified in the order Pelecaniformes, along with bitterns, ibises, spoonbills, the hammerhead, the shoebill, and of course, pelicans. But until recently, all of these birds, except the pelicans, belonged to the order Ciconiiformes, along with storks and flamingos. They were originally categorized this way due to morphology, specifically because they possess in common a number of anatomical characteristics that only evolve slowly, which indicates kinship rather than convergent evolution. These features include a particular arrangement of certain bones in the facial skeleton, a distinct lack of a certain feather in the wings, the presence of a minute pouch at the beginning of the large intestine, the possession of 16-20 neck vertebrae, and only two stabilizing muscles in the voice box. (For the scientifically and linguistically inclined: palatine bones, diastataxy, intestinal ceca, cervical vertebrae, and sternotracheal muscles.) However, genetic studies have caused ornithologists to question these morphological classifications (hence the reassignment), restricting the order Ciconiiformes to only storks and placing flamingos in their own order, Phoenicopteriformes.

In the day herons family (Ardeidae), there are over 60 recognized species. These are loose-plumaged wading birds with slim bodies; long necks; long, straight, sharp bills; medium to long legs; partial webbing between outer and middle toes (sometimes also between middle and inner toes); and a few other toe peculiarities. They are found worldwide, except in polar regions. Some are called bitterns or egrets instead of herons. Herons, egrets, and bitterns each have their own genus, but it’s the heron and egret genera, Ardea and Egretta, that seem least clear in their classifications. In general, egrets are white, smaller than herons, and sometimes have decorative plumes. (The word “egret” is derived from the French aigrette, meaning plume feathers.) Herons are generally larger with dark plumage. Good luck classifying a medium-sized bird that can be dark or white!

The reddish egret is a bird of the New World tropical coast and ranges from the Atlantic Coast of North America down through the West Indies and northern South America, across the Gulf Coast, and up the Pacific Coast of Mexico to Southern California. Mostly a permanent resident of Texas, though some may move south in the winter, they prefer coastal tidal flats, salt marshes, shores, lagoons, and protected bays and estuaries. The few seen inland are usually juveniles.

Though usually silent, the reddish has a grab bag of noises for courtship, aggression, and general chit chat. Its normal call is a low, guttural croak. Reddish egrets are crepuscular, meaning they are most active during dawn and dusk, and they often draw attention with their feeding behavior. Though most herons and egrets stalk their prey gracefully, the reddish hunts a little more theatrically. The birds first locate their prey by sight, and then the dance begins. They dash, lurch, zig-zag, and run in circles, staggering sideways, leaping in the air, spinning, frequently changing directions, intermittently hopping, collecting and herding their smörgåsbord… before finally spearing their prey. Sometimes they hunt more lazily. By standing still and curving their wings forward around their body to form a canopy, they create an appealing shady area in the water that attracts small fish, frogs, tadpoles, crustaceans, etc., which they quickly snatch up. This shadow-casting strategy is also thought to reduce glare, allowing the egret to more accurately sight and spear its prey. Though normally a social species, they feed primarily alone and will sometimes aggressively defend feeding territories. When prey is abundant, they do occur in large aggregations and multi-species flocks. Killifish dominate the diet, but they are opportunistic and will take crustaceans, frogs, and occasionally aquatic insects.

Reddish egrets interact frequently away from their nesting grounds, particularly near the onset of the breeding season. Some can’t contain their anticipation and begin courting on the feeding grounds – tossing their heads, raising their crest plumes, snapping their bills, and jumping flashily. During breeding, the dark morph’s head and neck become reddish-brown to pale cinnamon. The bill becomes strikingly two-toned. The lores turn turquoise blue (changing to flesh-colored during incubation/chick-rearing and then darkening back to normal near the end of nesting). The lance-shaped plumes on the head, neck, and upper breast turn cinnamon. The back turns grey and reddish-brown.Filamentous black tail plumes accentuate the bird’s characteristic shaggy appearance. The look is completed when the sides and back of the legs, as well as the underside of the feet, become turquoise blue. The only sexual dimorphism is size, the male being slightly larger. The full courtship behavior is complex and variable. Each male claims a display site in the colony, which he occupies and defends. There are aerial and ground displays, some meant to impress, some meant to intimidate. When a female’s attention is snared, the male stretches his head and neck upward and backward, shaggy plumes fully raised, then tosses his head forward repeatedly. He may also walk in circles around a female, tossing his head and raising one or both wings. The female chooses her champion, and they build their nest together, the male continuing to add material even during incubation, a duty they share.

Nesting habitat in Texas is mostly on arid coastal islands covered with oyster shell or thorny brush, even prickly pear (in Florida, they prefer red mangrove swamps). Nests are platforms of sticks and grass set right on the ground. They can be up to 10 inches thick with a diameter up to 26 inches. In Texas, nesting season begins in early spring and lasts through mid-summer, though timing seems to be variable and flexible across their range. Nesting colonies can include other species of egrets and herons, as well as cormorants and spoonbills. Females generally lay two to four eggs, but can have up to seven in a clutch. The eggs are pale greenish-blue and hatch in about 25-26 days. Both parents feed and protect the chicks, which leave the nest around four weeks and fledge around six weeks. Parents will continue to supplement their chicks’ diet for another few weeks. Little more than a third of the chicks that hatch will make it to fledging. Their predators include (but are not limited to) raccoons, coyotes, and great-tailed grackles, all of whom, in addition to taking chicks, will also steal eggs. Dark morph chicks are covered in gray down with a cinnamon gray head crest. White morph chicks have white down. Both have a raspy begging call. Juvenile dark morphs can be quite variable. I’ll leave the juvenile white morph coloration to your imagination. By a year and a half, juveniles resemble adults with hand-me-down plumage. At three years, they molt in full adult plumage. Perfect timing, because this is also the earliest they can breed, though most don’t until their fourth year. They live up to about twelve years.

In the 19th century, reddish egrets were hunted voraciously for their feathers, which were used to decorate ladies’ hats and clothing. The entire United States population of reddish egrets was nearly extinguished. They completely disappeared from Florida in the early 1900s. Finally, in 1918, the Migratory Bird Treaty Act was passed, protecting reddish egrets and many other birds from plumage hunters. In 1937, the reddish was recorded again in Florida, and has steadily recolonized much of its range. In Texas, numbers decreased from the 1930s to the 1970s, but recovered. Overall, both major North American populations increased in the past three decades. However, more recently, numbers have started to decline again. The IUCN Red List classifies reddish egrets as Near Threatened because, “despite its large range, it occupies a restricted habitat and is patchily distributed [and is therefore] assumed to have a moderately small and declining global population.” Like many coastal species, reddish egrets are dependent on their specialized habitats for foraging and breeding – the same habitats that are vulnerable to sea level rise caused by climate change. Intrusion by recreational activities, pesticide runoff, and land development also destroy habitat. However, the reddish egret, and many other species, benefit from conservation campaigns, such as the Texas campaign, Fish, Swim, and Play from 50 Yards Away! (from nesting birds). By just giving them a little space to raise their chicks, we increase their survival rate, and hopefully their entire population.

"If I have to choose, I'd rather have birds than airplanes.”
~Charles Lindbergh

Where I learned about reddish egrets, and you can too!

Proceedings of the National Academy of Sciences of the USA
www.pnas.org/content/91/21/9861.full.pdf