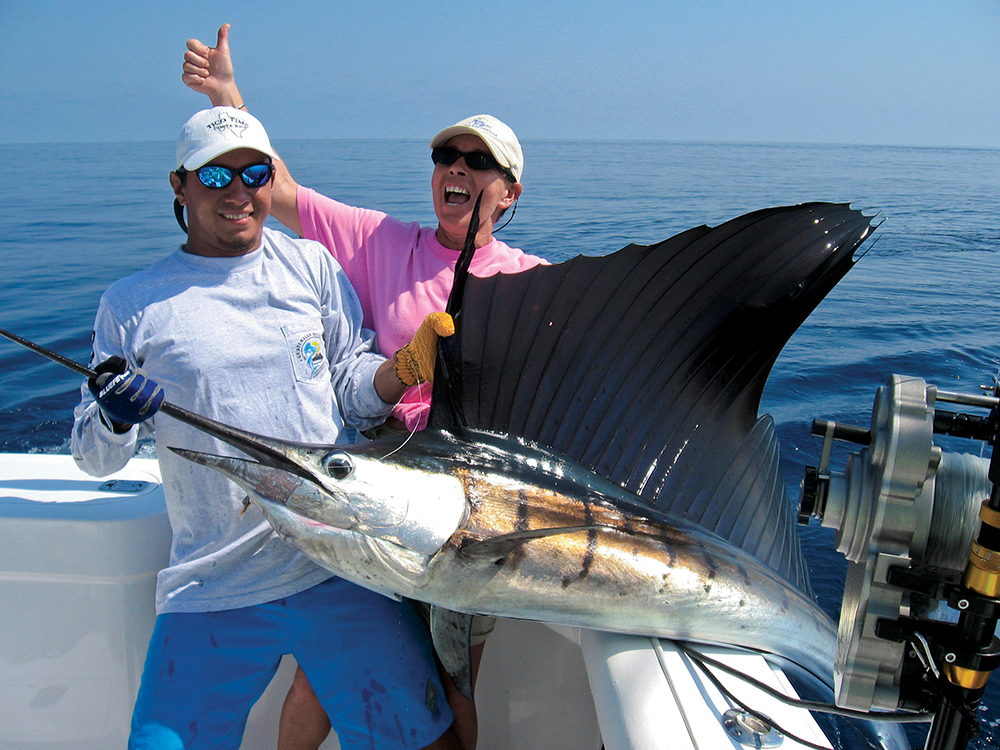 Sailfish migrate according to water temperature and prey movements. Some travel over 200,000 miles in their lifetime. While they spend more than 80 percent of their time in the warm, upper layers above the thermocline – and frequently visit nearshore waters – they can dive over 330 feet. One tagged sailfish had a maximum depth recording of 1522 feet. Special heat-producing tissue beneath the brain and adjacent to the eyes keep those organs warmer than the rest of the body and the surrounding water on deep dives. This is important because below a certain temperature, the eyes can’t follow (and the brain can’t process) flashes of light created by prey moving erratically and changing directions often. Warm organs function more effectively than cold ones.

Its extreme maneuverability and bursts of speed have earned the sailfish the reputation of being the fastest fish in the sea. In a series of speed trials conducted at a fishing camp in Long Key, Florida, one sailfish took out 100 yards of line in three seconds, equivalent to a speed of 68 mph. However, the fish was leaping while it was being timed, so the recorded speed, while commonly cited as the top speed for this species, doesn’t represent a true swimming speed. Measuring swimming speeds in fish can be tricky because the water they swim through is also moving, either contributing to or hindering their momentum. Separating swim speed from water speed takes some calculating. Many biologists have concluded that 68 mph is unlikely to be an attainable speed. By measuring how quickly muscles responded to electrical stimulus and translating that into how quickly the sailfish would be able to beat its tail, one study estimated that their top speed is probably closer to 25 mph, and that they probably spend most of their time swimming much slower. Another study – coming from a more mathematical perspective – concluded that at speeds above 31 mph, a beating fish tail would begin to experience cavitation, meaning it would be moving so quickly through the water that it would create tiny bubbles, which then burst and cause damage to the tissue, besides reducing swimming performance. Kind of puts a limit on the speed any animal can swim in shallow surface waters.

Sailfish occasionally form schools of up to 30 individuals, but more often occur in loose aggregations over a wide area. Juveniles school more densely than adults. While there is little specific information on communication between individuals, sailfish can vary their body colors by activating chromatophores in the skin, and they can utilize other visual signals, such dorsal fin movements. Normally kept folded down and to the side when swimming, the sail-like dorsal fin can be raised when the fish feels threatened or excited, exaggerating their size. They also use their high fins to herd schools of fish or squid into a tight ball. Other sailfish then burst through this mass of baitfish, slashing their bills from side to side (not spearing the fish, as is often incorrectly assumed). Small tooth-like protrusions on the bill called denticles intensify this effect. The sailfish can then leisurely swallow the stunned and injured prey. Divers have filmed sailfish hunting like this in groups, often flashing brilliant colors. They tend to prefer squid, flying fish, tunas, mackerels, jacks, halfbeaks, ribbonfish, and other fish that swim near the surface, but they’re not above taking their meals near the bottom if it comes down to it. Octopus is not an uncommon item on the menu. Free-swimming adult sailfish have very few predators. Hooked sailfish, however, have been known to be chomped on by great whites and orcas. Juveniles are preyed on by sea birds and other pelagic fishes, such as dolphinfish and sharks.

Though their size at hatching is only about 0.3 cm, sailfish grow extremely quickly. At six months, a juvenile may be 4.5 feet long and weigh six pounds. Sexual maturity is reached around three years, at 4 to 5 feet long. Females tend to grow faster and reach a larger maximum size than males. In general, sailfish don’t grow more than 10 feet long or weigh over 200 pounds, and those larger ones tend to be in the Pacific population. Sailfish from the Pacific attain significantly larger sizes than those in the Atlantic, which originally led them to be classified as two separate species. But recent genetic research has discovered that they are, in fact, the same species, Istiophorus platypterus. The Atlantic sailfish’s original species name, Istiophorus albicans, is now listed as a synonym for I. platypterus. The IGFA All-Tackle World Records still keep a list for each population though. The Pacific sailfish record is 221 pounds, caught near Isla Santa Cruz (Ecuador) on 2/12/1947. The Atlantic sailfish record is 142 pounds 6 ounces, caught near Lobito (Angola) on 3/12/2014. Though sailfish can live up to fifteen or sixteen years, the specimens typically caught by sport anglers have an average lifespan of only four to five years.

In the Atlantic, sailfish have little value as a commercial fish. Besides recreational fishing catches, they are mainly caught as bycatch in the longline tuna fishery or by commercial fisheries in surface drift nets, and by purse seines and some artisanal gears targeting marlin. The Pacific population is harvested for their dark red meat, which is utilized for sashimi, sushi, broiling, and baking. Though the IUCN Red List classifies them as Least Concern, many assessment models show evidence of overfishing, and additional models are data deficient. Even as widely recognized as they are, sailfish are difficult to study because of their highly migratory nature, making it hard for scientists to locate, tag, and collect data on individuals. Without more data on stock and catch statistics, informed management decisions are difficult to make. But their popularity may eventually bring them some protection. Many recreational anglers already practice catch and release, and with their cooperation, scientists may learn a lot more about the range and behavior of sailfish.

Where I learned about sailfish, and you can too!