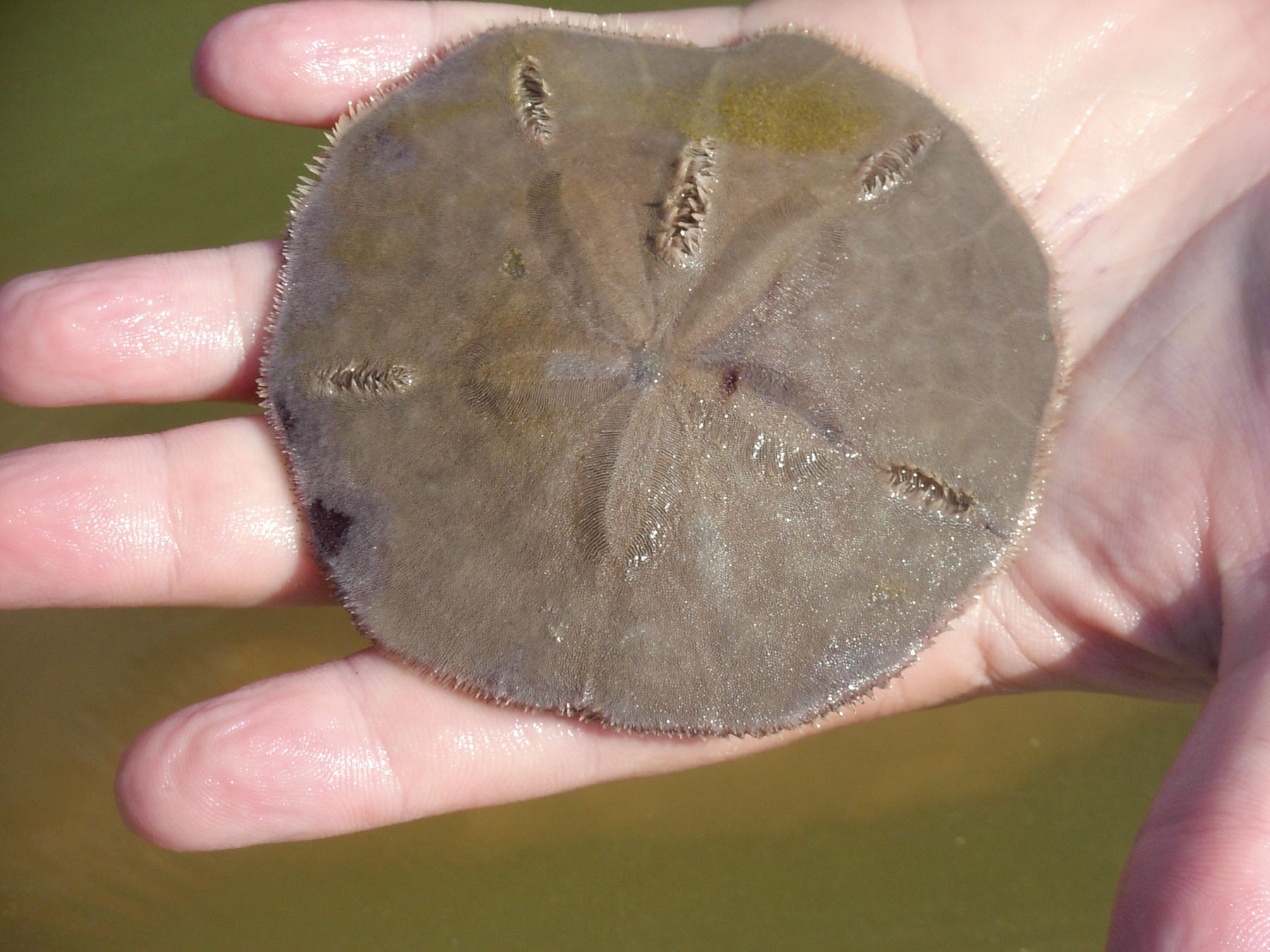 Photo credit: Lee Bray
Take a spin through any shell shop, and you'll almost certainly find the smooth remains of a once-spiny echinoderm. Often mistaken for shells, the sand dollars in these shops are actually skeletons of animals closely related to sea urchins. When alive, they resemble fuzzy cookies, the "fuzz" being a multitude of small spines. Also called keyhole urchins, sand dollars are a very common inhabitant of the second and third sandbars found off the Texas coast.

Sand dollars belong to the phylum Echinodermata, meaning "spiny skin" in Greek. All echinoderms have at least two things in common: a water vascular system and pentamerous radial symmetry. Instead of blood, echinoderms have a vascular system filled with sea water. The echinoderm moves by expanding and contracting chambers along its appendages. Radial symmetry means that the appendages radiate out from a central point, like the spokes on a bicycle wheel. Starfish are probably the most well-known example of this.

The radial symmetry in sand dollars is quite visible on the skeleton, though when alive, spines mostly cover the patterns. On top, five symmetrical petalloids serve as gills (and have a pleasant resemblance to flower petals). The five holes, called lunules, are used to pass algae, bacteria, and other planktonic foods to the sand dollar's mouth, located on the bottom side. Young sand dollars have notches that later develop into lunules. On their undersides, sand dollars have lots of small feet that are responsible for locomotion, burrowing, and food acquisition. If, by chance, a sand dollar is pushed onto its back, their unique body shape allows wave action to flip them back over. However, if a sand dollar happens to end up on its back in a relatively wave-free zone, it can push sand through its lunules, creating a pile of sand under its body until the body is vertical and topples back to its upright position (or it can bury itself vertically, then fall over right side up).

Most of the sand dollar's body is geared for meal time. Tiny cilia (very fine hairs) on the sand dollar's spines catch small bits of food, and tube feet adeptly collect larger food pieces that get caught underfoot. A teepee-shaped cone of spines on a sand dollar's body marks a spot where captive amphipods or crab larvae, etc., are being held for transport to the mouth. Once food is caught, the tube feet pass it along grooves that lead to the urchin's mouth. The mouth has a jaw with five teeth-like segments arranged in a circle (no surprise there); this structure is called Artistotle's lantern (so termed because it was first described by Aristotle as looking like the top of an oil lamp) and is used to grind up tiny plants and animals. Sometimes, a sand dollar "chews" its food for fifteen minutes before swallowing, and it can take up to two days for the food to digest.

While each piece of the sand dollar's anatomy has an actual function, some pieces have also become part of Christian symbolism. According to legend, the five lunules represent the four nail holes and spear wound of the crucifixion. The petalloids on one side represent the Easter Lily, with the star of Bethlehem in the center, and the flower-like design on the other side represents a Christmas poinsettia. If you break open the skeleton, you will find the five jaw parts of Artistotle's lantern; they represent the doves of peace, spreading good will. Of course, this only fully works with the one species of sand dollar, Mellita quinquiesperforata.

Keyhole urchins are independent, social creatures, meaning they receive some benefit by living in groups, but don't necessarily require a group to survive. Sometimes neighborhoods of sand dollars take up several square feet (suburban dwellings); others stretch for miles across the seafloor (urban dwellings). They spend most of their day motionless, just below the surface. At night, they form dense feeding aggregations in offshore troughs and bars, creeping about the seafloor, chowing down on minute organic particles. In quiet waters, they'll stand on end, partially buried in the sand, in order to filter feed. In fast-moving waters, adults fight the currents by growing heavier skeletons, and young sand dollars swallow heavy sand grains to weigh themselves down. When threatened by predators, they burrow in quick succession, like a domino effect of disappearing dollars. A pink sea star will leave a wide path of buried sand dollars as it moves across a sand dollar bed. Predators of sand dollars depend on which species you are talking about, and what part of the world you are in, but generally include sea stars, predatory snails, and bottom feeding fish, such as skates.

The life cycles of sand dollars are complex and include several stages of metamorphosis. They breed in late spring and summer by broadcast spawning. This occurs when females and males respectively release their eggs and sperm into the water. After the eggs have been fertilized they will develop into bilaterally symmetrical swimming larvae. These swimming larvae are covered with cilia and drift about as plankton for four to six weeks, feeding on tiny organisms until they metamorphosize into young keyhole urchins and acquire their radial symmetry. Many echinoderms have this metamorphosis from bilateral symmetry to radial symmetry in their life cycles. Scientists can age a sand dollar by counting the growth rings on the plates of the exoskeleton. The average lifespan is four years, but they can survive up to ten years before they come to rest in some beachcomber's bucket.

As for the sand dollar's role in the ecosystem, they control the populations of many small organisms and serve as food for many other organisms within the same ecosystem. They often disturb several layers of sediment by sifting for food and burrowing. Other than the popularity of their skeletons, they have little economic import for humans. As it is now, it seems we two species on the Texas coast have very little to do with each other, which is probably for the best.

May you always have a shell in your pocket and sand in your shoes!

Where I learned about sand dollars, and you can, too!

Legend of the Sand Dollar
www.legendofthesanddollar.com/