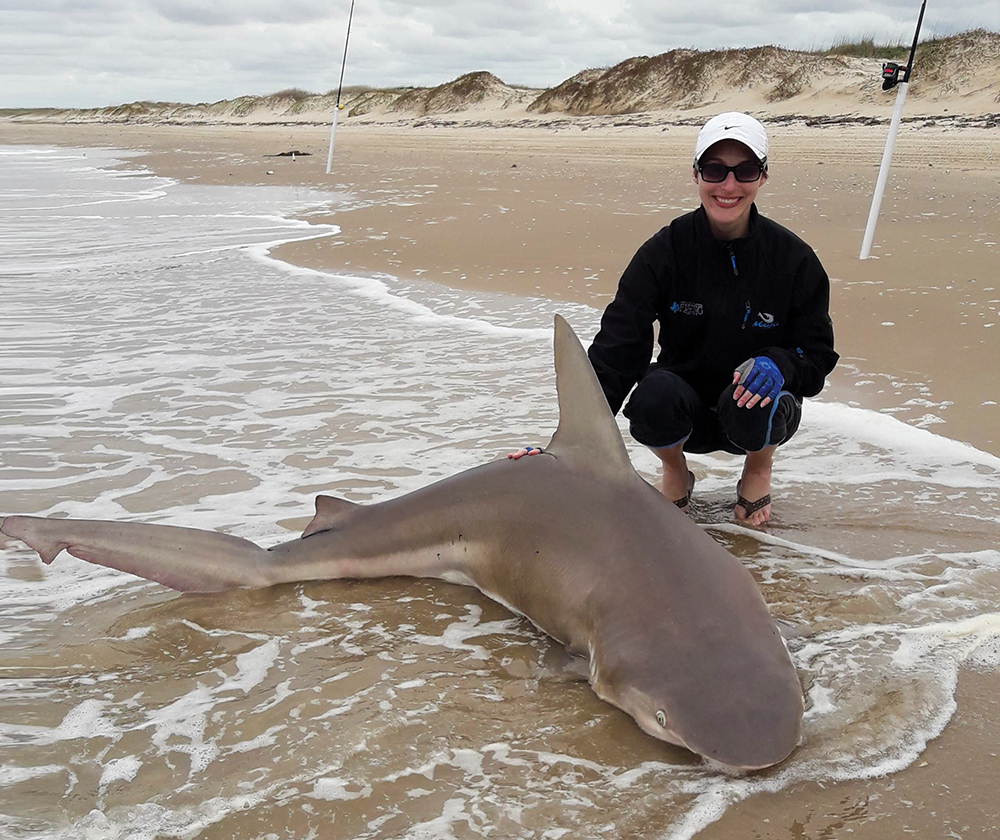 My just-over-seven-foot sandbar, probably pregnant (according to Oz) – CPR! Originally tagged by Oz in March 2018. (Photo by Donna Boyd)

My mom and I recently had the opportunity to go shark fishing with Eric Ozolins on North Padre, and I was lucky to reel in a beautiful sandbar shark. Even though I’d already written an article about sharks in general, Eric convinced me that this species deserves its own highlight, and after seeing one in person, I can hardly disagree.

The sandbar shark, Carcharhinus plumbeus, is one of the largest coastal pelagic sharks, classically shaped, reaching up to eight feet in length and 250 pounds. Their genus name, Carcharhinus, which is of Greek derivation, translates to ‘sharpened nose of lead.’ Though the sandbar has a bluntly rounded snout, its profile is indeed sharp. Coloration ranges from dark gray to bronze or brown on top, fading to a lighter shade on the sides and white on the belly. Aside from a darker tone on the tips and outer margins of the dorsal and caudal fins, there are no distinctive markings or color patterns. The sandbar’s most distinguishing characteristic is its taller-than-average first dorsal fin. Other identifying characteristics include a relatively heavy body, somewhat long pectoral fins, and an interdorsal ridge (a visible line of raised skin between dorsal fins). Additionally, they have widely spaced dermal denticles with no definite teeth and which don’t overlap as they do in most sharks of the same family (Carcharhinidae). Their upper (actual) teeth are broadly triangular and serrated with a high cusp. The lower teeth are narrower and more finely serrated. They have excellent eyesight, even in relatively dark waters, thanks to a reflective layer of tissue, called the tapetum, at the back of the eyeballs. Sandbars also have an extremely good sense of smell, sensitivity to vibrations, and the ability to detect micro electrical fields generated by other animals.

True to its name, this shark prefers the sandy bottoms of coastal areas. They are found worldwide in subtropical waters, typically in waters less than 330 feet. Sandbars tend to occupy waters on continental shelves, oceanic banks, and island terraces but are also commonly found in harbors, estuaries, at the mouths of bays and rivers, and shallow turbid water. Despite this, they are exclusively a marine species and do not venture into freshwater. Although they frequent shallow waters, they are rarely seen at the surface, apparently preferring to stay in the lower part of the water column. As with many sharks of its genus, the sandbar shark undergoes seasonal migrations, influenced mainly by temperature, though ocean currents may also play a significant role. Males migrate earlier and in deeper water than females. Males also often travel in large schools while females exhibit solitary migrations. Due to the vast distances between known populations of sandbar sharks around the world, it is highly probable that they are capable of long, pelagic migrations. However, any long-range movements are more likely a result of accidental or irregular “rides” of prevailing oceanic currents rather than the regular migrations associated with seasonal temperature.

Sandbars are opportunistic bottom-feeders that prey primarily on relatively small fishes, mollusks, and crustaceans. Common food items include various bony fishes, eels, skates, rays, dogfish, octopus, squid, bivalves, shrimp, and crabs. They may forage throughout the day but are generally more active at night. Feeding studies indicate that these sharks are very successful in their hunting techniques and, on average, eat more than many of their near relatives. Juvenile sandbar sharks may fall prey to larger sharks, such as the bull shark, but adults have few, if any, predators.

In the northern hemisphere, mating occurs in the late spring or early summer. During this time, a mature male will persistently follow a female, occasionally biting her between the dorsal fins until she turns over. This courtship behavior, which is present in most carcharhinids, often leaves the female with permanent scaring. Once fertilization occurs, the gestation period can range from eight to twelve months, depending upon geographical location. The embryos are nourished via a placental sac, and the pups are born live, typically from June through August (in the Western Atlantic). The number of pups varies from six to thirteen and litter size is dependent on the size of the mother. The larger the mother, the more pups she will deliver. Typically the mother will select a nearshore, shallow water area to give birth. Shallow water habitats provide a nursery area for young sharks where they are protected from predation by larger sharks. The mother leaves the nursery area shortly after she gives birth and doesn’t offer any assistance or care to her new offspring. She will only have pups every two or three years.

Young sandbar sharks resemble miniature adults, although the characteristically large first dorsal fin may not yet be as prominent at this early stage. Juveniles remain in the shallows until late fall, at which time they form schools and move southward and further offshore where they stay until the following summer when they return to shallow waters. This seasonal movement between shallow and deep waters may continue for up to five years and is an important reason why programs establishing essential habitat for this species need to designate several different habitats for protection. Wild sandbars grow very slowly and mature at a relatively late age. In Western Australia, annual growth band formation was validated using vertebrae from tagged sharks. The oldest female was estimated to be 25 years of age and the oldest male was 19 years. The ages at which fifty percent of female and male sharks were sexually mature was estimated to be 16 and 13, respectively.

As with many shark species, shark finning and overfishing have devastated the sandbar shark population in recent decades. Until recently, it was the most important commercial shark species in the United States. Because of its numbers, moderate size, palatable meat, and high fin-to-carcass ratio, it was the primary targeted species along the eastern United States. Small litter size, slow growth rate, and a relatively long gestation period make this species particularly vulnerable to over-exploitation. Additionally, sandbars were often advertised to restaurants and seafood markets as blacktips, so people would not assume the meat was dirty, sandy, or in any way subpar in taste and quality based just on the name, so commercial catch numbers may have been underreported. Increased demand in the 1980s had a profound adverse effect on the numbers of sandbars in the southwestern Atlantic. Sandbar stocks were reduced 85-90 percent in just ten years and only continued to support a fishery because of the very large size of the original stock. Adult females became very uncommon and the average size of individuals has declined by about 70 percent since 1975. Although management was introduced in 1993 and the numbers were reported to have increased by 2002, a recent assessment estimated that the stock is still only 35-47 percent of its original size. In addition, it is believed that part of the recovery is due to a decrease in predation of juvenile sandbars by larger sharks, based on declining populations of large predatory sharks. All things considered, sandbar sharks are assessed as globally Vulnerable on the IUCN Red List, based on “significant population declines throughout its northwest and western central Atlantic range due to target and bycatch exploitation by fisheries, which although now managed in US waters, is not the case elsewhere in the region.”

Due to its preference for smaller prey and its tendency to avoid the surface, the sandbar shark poses little threat to humans, though its size does make it potentially dangerous. It is valuable to recreational fishermen as a game fish (I can personally affirm this). However, sandbars are currently listed as a prohibited species in the TPWD shark fishing regulations, so catch and release only!

“Sharks are beautiful animals, and if you're lucky enough to see lots of them, that means that you're in a healthy ocean. You should be afraid if you are in the ocean and don't see sharks.”
~ Sylvia Earle

Where I learned about sandbar sharks, and you can too!

Aquarium of the Pacific
www.aquariumofpacific.org/onlinelearningcenter/species/sandbar