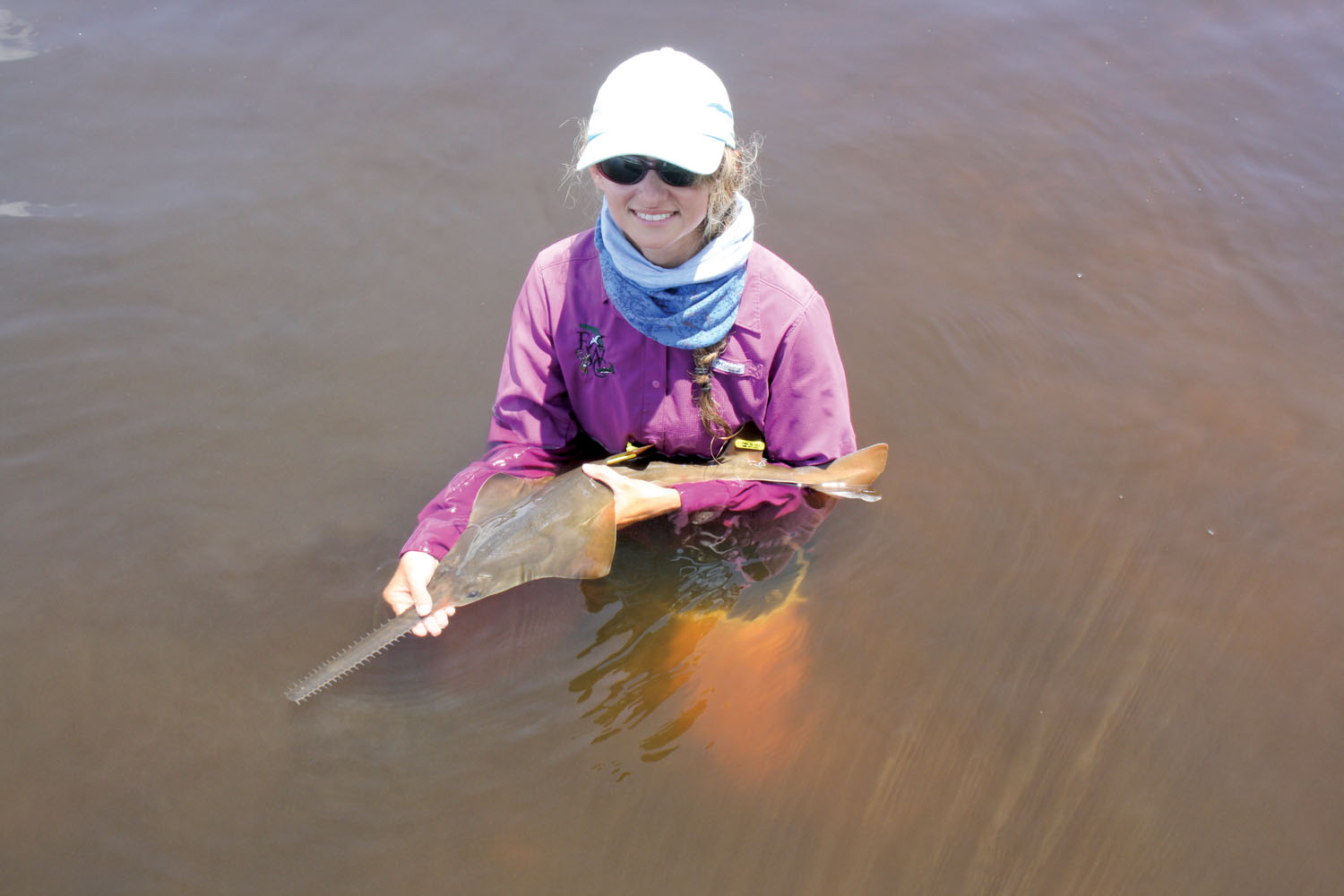 Carpenter sharks, sawfish, prehistoric slashers... These iconic fish are easily recognized, even by those who have never seen one. They belong to a group of fish called elasmobranchs, whose skeletons are made of cartilage. Even though they are sometimes called sharks, sawfish are, in fact, rays with a distinctly intermediate, shark-like body form, similar to guitarfish. Well, somewhat similar. There's just a minor difference in the nose area. Sawfish get their name from their "saws" long, flat snouts edged in teeth. That's the appearance anyway, but those teeth aren't actually teeth. Like sharks, sawfish are covered in tiny dermal denticles, giving their skin a sandpaper texture, and the teeth on their saw are large modified denticles. Still, the difference between the business end of a denticle or tooth is all the same to most.

Sawfishes are some of the largest living rays, commonly reaching 16 feet in length. Some may even reach up to 25 feet. They are giants of the inshore waters, preferring the shallow, muddy, coastal waters of tropical seas, estuaries, and river systems throughout the world. Early sawfish arose around 100 million years ago, but ancestors of the modern sawfish, family Pristidae, didn't arrive until some 56 to 62 million years ago. With a giant hedge trimmer for a nose, you would think the sawfish wouldn't have to worry about someone showing up in the same costume, but amazingly enough, the sawfish's snout is not unique. A second group of fish, sawsharks, has a similarly bladed snout. They are true sharks, with gill slits on the side of their body (as opposed to rays, who have gill slits on the underside). They are completely unrelated taxonomically, a spectacular example of convergent evolution the process where "different species turn up for life's party accidentally wearing the same clothes." And as if their similar noses weren't enough to confuse, taxonomists had a ball with their names. Sawfish belong to the order Pristiformes and the family Pristidae. Sawsharks belong to the order Pristiophoriformes and the family Pristiophoridae. I suppose it's not that unexpected; pristis means "saw" in ancient Greek. Despite this fun wordplay, you'll probably never mix them up in real life. Sawsharks live in very deep water and are very small in comparison. They also have a nose ring (two sensory barbels hanging from the middle of the saw).

Sawfishes are nocturnal, spending much of the day in the muddy floor. At night, they slowly cruise the shallows, using their sensitive nose to find buried prey. Let's talk about that nose! The rostrum, often referred to as the "saw," is a cartilaginous extension of the skull used for both feeding and defense. Unlike shark teeth, saw teeth don't fall out and grow back. The number of rostral teeth is fixed before birth. But if the sawfish chips a tooth while on the defensive or if its teeth just wear down, it's no big deal. The teeth grow continuously throughout the fish's life. The rostrum is covered with sensitive pores that can detect movements or electric fields of passing prey. The pores are mostly concentrated on the topside of the saw, enabling the sawfish to stalk prey above the rostrum. This extra sense is especially handy in murky, dark waters. When either dinner or danger is detected, the sawfish strikes with surprisingly fast lateral swipes that can split smaller fish in two and at least pierce most other flesh it comes in contact with. Despite its large size and fearsome nose, the sawfish is usually placid and has few predators as an adult. Crocodiles, large sharks, and dolphins all prey on juvenile sawfish, though. Sawfish are primarily piscivorous, but won't turn down shrimp, crabs, and other bottom-dwelling invertebrates that they happen to glide over.

Little is known about the reproductive habits of sawfish. They reach sexual maturity around 10 years old, and are estimated to mate once every two years, with an average litter of eight pups. Sawfish are ovoviviparous, meaning that fertilization occurs inside the female and young sawfish grow in eggs contained within the mother. After the embryos are fully developed, the mother sawfish gives live birth. Newborn sawfish are somewhat malleable at birth, with the saw covered by a thin membrane, to prevent injury to the mother. However, this leaves the pups defenseless until the rostrum hardens. If they escape predation as juveniles, they can live up to 50 years.

Their extremely low reproductive rate makes these animals especially slow to recover from population loss. There are seven living species in the world, and all are critically endangered due to overfishing, entanglement in fishing gear, and habitat destruction. Their long, toothed rostrums become very easily entangled in fishing line and nets, and because adults can grow very large and are potentially dangerous, many incidentally captured sawfish are killed before they are removed from fishing gear, even if the fishermen have no interest in keeping them. Because they are such an impressive catch, many more were kept as trophies. They continue to be hunted in other parts of the world for their rostrum, fins, liver oil, and for use as medicine, even though international trade is banned. Juvenile sawfish use shallow habitats with a lot of vegetation, such as mangrove forests, as important nursery areas. Loss of these nursery habitats for conversion to beachfront development contributes to the decline. After decades of incidental capture and habitat destruction, sawfish populations worldwide are severely depleted, some down to 5 percent or less of their original population.

Because of their critically endangered status, one population of smalltooth sawfish, Pristis pectinata, off the coast of Florida were regularly monitored from 2004 to 2011 by the School of Marine and Atmospheric Science, Stony Brook University - NY. The broad census consisted of tissue samples from 190 sawfish that were caught and released. Genetics were tested to see how the sawfish in Florida are coping with things like global warming and ocean acidification. The team's other objective was to scan the DNA samples for signs of inbreeding because when sexual partners become scarce, animals sometimes resort to mating with siblings. A computer program named STORM decoded gene sequences to calculate the percentage of internal relatedness between all the fish that generously donated tissue samples. A reading near 0 percent means both parents come from different families. A reading between 25 to 50 percent means the parents are half or full siblings, respectively. Among those 290 sawfish were 7 females with readings from 84 to 100 percent, suggesting that they were conceived by facultative parthenogenesis the ability of a sexually reproducing species to sometimes produce offspring asexually. This is a different process from the obligate asexuality seen in some frogs, salamanders, fish, and lizards, which results in an exact clone of the mother. Like in many other creatures, sawfish cells carry out a specialized form of cell division, called meiosis, which produces reproductive cells, each of which possesses half the material needed to make offspring. In the "sensational seven," pairs of reproductive cells likely fused, resulting in highly inbred offspring. However, these offspring are not clones of the mother. Reproductive cells are not perfectly identical to each other, and neither are the resulting parthenogens. Humans and other mammals can't reproduce asexually due to a fail-safe system, called genomic imprinting, that only allows an egg to develop into an embryo if it has received both male and female input.

It remains to be seen whether or not parthenogenesis will ultimately have a positive or negative effect on the smalltooth sawfish species. It does allow females to continue the species when males are scarce, but it isn't an ideal long-term solution. Parthenogenic offspring will always be female, so it skews the sex ratio, and there would never be sexual reproduction after the males died out. Plus, parthenogens live with reduced genetic diversity, leaving them more vulnerable to changing environmental conditions.

Historically, the smalltooth sawfish, Pristis pectinata, and the largetooth sawfish, Pristis perotteti, prowled throughout the shallow, coastal waters of the Gulf of Mexico. The smalltooth sawfish, which used to range from New York to Texas, is now found only off the lower peninsula of Florida, with its most important habitat extending from Charlotte Harbor, on the southwestern Gulf coast of Florida, through the Ten Thousand Islands area of the Everglades into Florida Bay and the Keys. The largetooth sawfish, which was most common in the northwestern Gulf of Mexico, has not been seen in the Gulf since the 1960s. In the Western Atlantic, the largetooth sawfish can now only be regularly encountered in the Amazon River basin, the Rio Colorado-Rio San Juan area in Nicaragua, and possibly some remote areas of French Guiana, Suriname, and Guyana.

The smalltooth sawfish was listed as an endangered species in 2003. Conservationists hope conditions will become favorable for both sawfish species to eventually stage a comeback in Gulf waters, but because of their relatively slow growth rate, late onset of sexual maturity, and low fecundity, it takes longer for sawfish to rebound than many other fish species. Florida provides educational resources for fisherman to safely release sawfish that are mistakenly caught, and the dual effect of marine protected areas and bans on entangling fishing gear have helped to slow the decline of sawfish. Some reports even claim the population is beginning to stabilize. "Our recovery plan covers 100 years, which should give a pretty good indication of how much trouble the animal is in." ~George Burgess, ichthyologist and sawfish expert at the University of Florida in Gainesville

Until sawfish do make their way back to Texas, go find an old salt and ask him to tell you tales of the saw-toothed sea monster they used to catch in the good ol' days!

Where I learned about sawfish, and you can too!