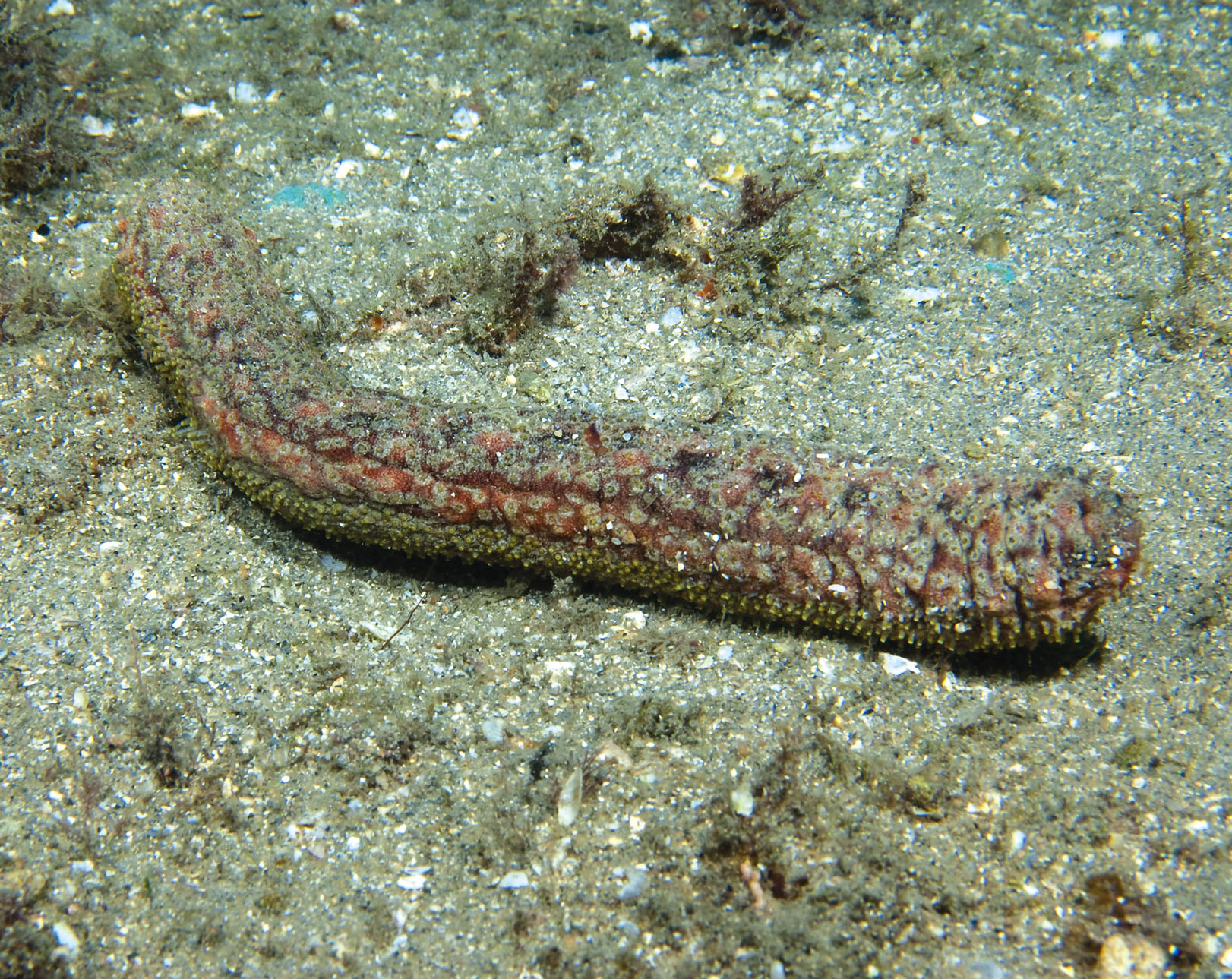 Resembling a cross between a squishy zucchini and a bloated eclair, it squirms across the sea floor, slurps in rotting debris, and occasionally spews out its organs. Sea cucumbers are found in virtually all marine environments throughout the world, from warm tropical waters to cold deep sea trenches. There are over 1250 species of this sea star relative, and many of these animals are indeed shaped like soft-bodied cucumbers. Like sea stars, cucumbers are echinoderms, though at first glance their gelatinous bodies may not seem to fit the "spiny skinned" or radial symmetry descriptions of this group. They do retain the skeleton of echinoderms, but in most species, the skeletal plates have been reduced to microscopic spicules. Now for the radial symmetry: imagine stacking a bunch of sea stars on top of one another, so that the stack is taller than it is wide. Now imagine all of those sea stars were actually just one sea star with a really tall body. Now turn that sea star on its side, and wha la! That's how the radial symmetry presents itself in a sea cucumber. One way to think of a sea cucumber is as a sea star lying on its side, stretched out, and missing much of its skeleton!

Sea cucumbers come in two basic varieties: raw and pickled; the former for salads, the latter for ice cream kidding! Actually (1) those with tube feet, which work on water pressure, and (2) those without tube feet. However, even in sea cucumbers that lack regular tube feet, those immediately around the mouth are always present. These are highly modified into retractile tentacles, much larger than the regular tube feet. Sea cucumbers have between ten and thirty such tentacles, depending on the species. Like all echinoderms, sea cucumbers have a water-vascular system that provides hydraulic pressure to the tentacles and tube feet, allowing them to move. The common, large, dark-colored sea cucumbers generally have tube feet on the lower surface of the body that they use to glide over sand or pebbles. The sea cucumbers without tube feet are jelly-like and have anchor-like small spicules or "spines" over the entire body, making them feel sticky. They are often mistaken for marine worms.

A sea cucumber breathes by pumping sea water in and out of an internal organ called a respiratory tree, attached to the intestine near the anus (yes, they breathe through their bums). Sea cucumbers have no brains; in fact, most have no distinct sensory organs, although there are various nerve endings scattered through the skin giving the animal a sense of touch and a sensitivity to the presence of light. One remarkable feature these animals have evolved is the ability to modulate the shape of their body when needed. By loosening or tightening the "catch" collagen that forms their body wall, a sea cucumber can essentially liquefy its body and squeeze through a small gap. To keep itself safe in these crevices and cracks, the sea cucumber will then hook up all its collagen fibers to make its body firm again. Perks of having almost no skeleton...

***Fun Fact: some sea cucumbers are commonly called sea apples. That's because they are round like apples instead of long and slender like cucumbers. These brightly colored sea cucumbers use their tube feet to slowly crawl about. When in danger, sea apples can pull their short tentacles back into their bodies for protection.***

Sea cucumbers can reproduce sexually or asexually, though sexual reproduction is more common. During spawning, sea cucumbers develop a cobra-like appearance, with their front end raised up from the bottom. Eggs and sperm are broadcast (released) into the water and fertilization occurs when they meet. There must be many individuals in an area for this method to be successful; consequently, many parts of the ocean host large herds of cucumbers. The strawberry sea cucumber (Squamocnus brevidentis) of New Zealand lives on rocky walls around the southern coast of the South Island where populations sometimes reach densities of 100 animals per square foot. For this reason, one such area in Fiordland is called the strawberry fields.

A few species brood the fertilized eggs inside a pouch on the adult's body, where they develop and eventually hatch from the pouch as juvenile sea cucumbers. Juveniles take several years to grow to their adult size. In all other species, the egg develops into a free-swimming larva, typically after around three days of development. The tiny planktonic larva drifts with the ocean currents and will eventually settle onto the sea floor and develop into an adult. These nocturnal animals have a life span of about 5 to 10 years and vary in size from less than an inch to over 6 feet.

With bodies that long, you might expect sea cucumbers to be the nightmare worms of the ocean, sucking up everything in their path! But you'd be wrong. Sea cucumbers feed on tiny particles like algae, minute aquatic animals, or waste materials. Some species use tube feet modified as branched oral tentacles to capture particles or plankton and transfer them to the mouth. The bottom-dwelling species, which are the vast majority, are basically our seafloor janitors. As they creep along the ocean bottom, they open their mouths and take in the mud. The mud moves through the sea cucumber's body. As it does, tiny particles of dead organisms are separated out and used as food. The mud and the waste from digested food continue on through and exit the other end of the sea cucumber's body. The particles become fodder for bacteria, and thus recycle back into the ocean ecosystem. Earthworms perform a similar function in terrestrial ecosystems. In areas where overfishing has reduced the population of sea cucumbers, the seafloor hardens, thus destroying the habitat for other bottom-dwelling creatures.

Sea turtles, crustaceans, many fish, and many people eat sea cucumbers, but sea cucumbers have an array of defenses up their tube sleeves. First off, some sea cucumbers' bodies contain toxins that can deter attackers. If that's not enough, cucumbers can contract their muscles and shoot out water from their body making them shorter, thicker, and harder. If that doesn't work, they shoot out sticky threads (enlargements of the respiratory tree), which can be accompanied by the discharge of a toxic chemical known as holothurin, which has similar properties to soap; this chemical can kill animals in the vicinity. Finally, if the threat is still not deterred, sea cucumbers will, at such times, violently contract their bodies and spew out a large part of their internal organs, an act called evisceration. The internal organs contain a toxin that is deadly to fish and other marine animals. These organs grow back in about six weeks, and this has the added benefit of discarding waste buildup in their bodies.

These extreme measures don't deter everybody, however. Just imagine, you take a breath (through your bum), maybe a deep yawn, and a little fish shoots right in, making itself comfortable in your respiratory organ, possibly snacking on your gonads. Or perhaps a pair squirm in and have sex in your body cavity. Not only does the pearlfish fail to trip any defenses when it enters the sea cucumber, it seems to be immune to its toxins, which may be attributable to the copious amount of mucous coating the fish's body. Depending on what species it is, the pearlfish initiates one of two relationships once inside: a commensal one, in which it simply takes up space without either helping or hurting the sea cucumber, or a parasitic one, in which it chows down on its host's gonads (which, admittedly, can easily regenerate, but the indignity is pretty scaring). And this little fish isn't alone. Many polychaete worms and crabs have also specialized to use the cloacal respiratory trees for protection by living inside the sea cucumber. There's even a shrimp that hangs out right on the edge of the anal opening. Sea cucumber bums are the IT spots, it seems. Even people want in on the action.

Some forms of sea cucumber have been used in traditional Asian folk remedies to help heal wounds and for conditions such as arthritis, sports injuries, tendinitis, and other inflammatory diseases.. In China in particular, the sea cucumber is used to treat joint pain, and, more importantly, as an aphrodisiac. The sea cucumber is considered a dining delicacy and a symbol of high esteem for a loved one. The demand is so heavy that worldwide twenty percent of sea cucumber fisheries have been fully depleted. To fill the void, people began fishing for sea cucumbers in the waters near the Galapagos Islands in 1988. In 2001, the Inter-institutional Management Authority agreed on regulations that allow resident fishermen to catch four million sea cucumbers each year in established fishing zones near islands. Last year, sea cucumber harvest in Florida more than tripled, and may be headed towards similar regulation as a result.

Texas has only a couple residential cucumbers: Allothyone mexicana (no common name) and Holothuria grisea (the gray sea cucumber). A. mexicana is found in and around the grass flats. It's usually rather small, two to three centimeters, though it can grow up to eight inches. It is tan or brown and spends an awful lot of time buried in the mud with both ends of its body just above the sea floor. It filters plankton out of the water with its sticky tentacles (so, not so much the "earthworm" type) and is generally mistaken for rocks or debris. The gray sea cucumber has a more striking color pattern than its name suggests, which is a distinguishing feature in the species. They are usually red or yellowish red, marked with brown mottling, with yellow tentacles, and grow up to about ten inches. They have a broad range including Florida, Puerto Rico, Jamaica all the way to southern Brazil and West Africa. This species may be only a seasonal resident of coastal Texas, just dropping in for some South Padre sun.

"But somewhere, beyond Space and Time Is wetter water, slimier slime!"

(And that would have to be truly, awfully slimy, considering the slimy denizens of our seas!)

Where I learned about sea cucumbers, and you can too!

"Absurd Creature of the Week"
www.wired.com/wiredscience/2014/02/absurd-creature-of-the-week-pearlfish/