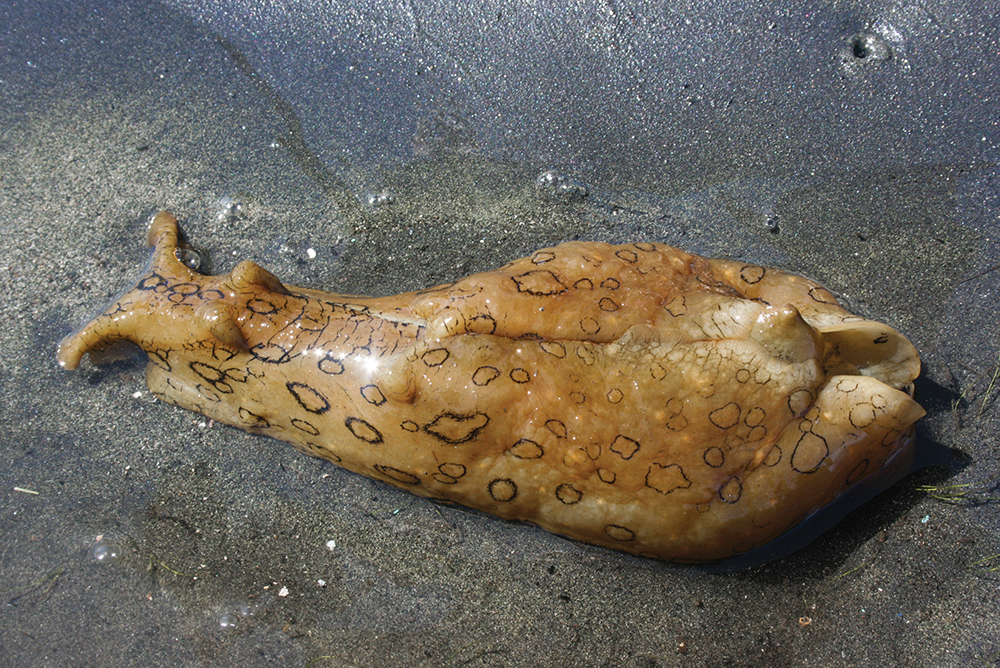 Sea hare is the common name for a large group of herbivorous sea slugs in Anaspidea, an order consisting of two superfamilies, only one of which (Aplysioidea) are true sea hares. The other, Akeroidea, are primitive relatives. Sea hares are cosmopolitan, found in temperate and tropical seas, inhabiting calm shallow coastal areas and sheltered bays wherever there is an abundance of algae. (In biogeography, cosmopolitan distribution refers to a range that extends across all or most of the world in appropriate habitats.)

Though these marine gastropod mollusks lack outer shells, most have an atrophied internal shell that lies fully or partially within the mantle (a flap on the back that covers the gills and other internal organs). This very reduced mantle cavity is enveloped in a pair of large fleshy protrusions called parapodial lobes, which allow some to swim or glide through the water. Species range in size from less than an inch, to over 27 inches and 4.5 pounds. Their varied colors are derived from the pigments in their diet. They usually bear a pair of somewhat tubular rhinophores on their head and large flattened oral tentacles on either side of the mouth. A rhinophore is one of a pair of chemosensory structures. The name relates to the rhinophore's function as an organ of smell. "Rhino" means nose from the Ancient Greek, rhis. Rhinophores are scent or taste receptors. They are primarily used for chemoreception and rheoreception (response to water current). The ‘scents’ detected are chemicals dissolved in the seawater, such as pheromones in possible mates. To protect the prominent rhinophores against nibbling by predators, most species are able to withdraw them into a pocket beneath the skin. The common name, sea hares, possibly originated during the time of Aristotle in Ancient Greece when a Mediterranean species was likened to a sitting hare, the large parapodia resembling the rounded back, and the rhinophores resembling the ears. Apparently Aristotle fancied sea hares as being poisonous to the touch, but they’re not.

The sea hare's usual method of travel is crawling, which it achieves by lifting the front end of the foot (aka the ‘belly’ [not literally the stomach]) and stretching it forward, placing it on the ground, and creating an arching pattern. The remainder of the body follows this arching pattern – like an inch worm! Hares that are capable of swimming accomplish the action by creating a funnel using the parapodia – first folding forward and downwards (this action pulls in water), then pressing the anterior parts of the parapodia together to push the water out behind. A sort of jet propulsion. Sea hares feed on a variety of algaes (red, green, and brown) and eelgrass. They use their jaws to grasp and the radula to pull the algae into the mouth. The crop is lined with chitinous plates and acts like a gizzard to aide in the digestion of larger seaweeds. Due to algae’s location on rocky or sandy substrates, sea hares often unavoidably consume sand. A side of sand makes for a heavier hare, and therefore reduces its ability to swim, so it’s no surprise that hungry hares seem to swim more than satiated ones.

Some sea hare species squirt purple or red ink when disturbed or attacked. The commonly believed function of this ink is that, like the octopus, it provides a screen or decoy for a quick escape. However, even among the swimmers, “quick” or “fast” isn’t really in the sea hare’s repertoire. More likely, the ink is a chemical irritant. Sea hares store noxious chemicals from their algal cuisine, and usually their leathery skin accumulates these toxins, but the ink could also be a way to remove unwanted chemicals from the hare’s body, a two-birds-one-stone solution. In a laboratory study conducted in 1969, hares from the genus Aplysia were fed brown and red algae to determine the effect on ink replenishment. Because ink was only replenished when red algae was consumed, it is believed that Aplysia extract the biliprotein chromophores, a complex of protein and bile pigments, from the red algae and store them in their ink glands. Despite these deterrents, sea hares are still preyed upon by pycnogonid sea spiders, wrasses, and sea turtles

Sea hares are hermaphrodites, meaning they possess both male and female reproductive organs. The male reproductive organ is on the right side of the head; the female reproductive organ is situated in the mantle cavity, beneath the shell, down between the parapodia. They can mate in pairs, but they commonly occur in large groups during the mating season, often leading to chains of three or more sea hares mating together. The one at the front acts as a female, the one at the back as a male, and the hares in between act as both male and female. Eggs are laid in gelatinous chains that can be several yards long and contain over 20 million eggs. Frequently seen in intertidal grass beds to around 10 feet deep, they appear as a long tangled string of variably shaded green or brown hues. The large number of eggs produced requires that there be little yolk. When the eggs hatch, larvae spend at least a month in the planktonic phase before they settle onto algae patches where they eat and grow into adults.

Because of their relatively simple, large, and easily accessible nervous system, sea hares are often used for neurobiological studies. The Aplysia genus, in particular, have a well-understood and mapped-out neural circuit, and are commonly used in medical research to study learning behaviors. Specifically, the right giant neuron of Aplysia dactylomela, the spotted sea hare, is similar to that of vertebrates, making it ideal for the study of electrophysiology, as well as conditioned-response studies. These neurons have been found to be invaluable in detecting long-lasting effects in neuronal behavior.

A few species that can be found in our bays are the mottled sea hare, Aplysia fasciata, the sooty sea hare, Aplysia morio, and the spotted sea hare, Aplysia dactylomela. The mottled sea hare is a relatively large swimming hare, growing up to 10.5 inches long. Color varies from light brown to dark red-brown or red-purple, lighter color mottling on head, neck, and ‘wings.’ There can also be veins and streaks of black or dark brown. Spews purple ink. The most active, graceful, and best surviving of all the species of Aplysia, according to the Gulf Specimen Marine Lab. Coloration and shape of the internal shell help distinguish different sea hares. Also sometimes called a sooty sea hare, but the true sooty sea hare is uniformly dark brown to black, though sometimes darker lines and stripes can be seen on the head and sides. Sooties are also a swimming hare and grow about 16 inches long. They can live at depths up to 131 feet but prefer habitats with low wave shock because of their poor grasping abilities (when a strong storm stirs up their habitats, Aplysia are usually washed ashore). The spotted sea hare is characterized by relatively tough, leathery parapodia; large dark or black rings; and blackish reticulate lines. Black markings can be seen on both the outside and inside of the parapodia. The color of the spotted sea hare is very variable, from pale gray to green, to dark brown, or may be more orangey if their diet consists primarily of red algae. However, there are almost always large black rings on the mantle. At 16 inches long, you might spot them swimming through the bays!

Where I learned about sea hares, and you can too!