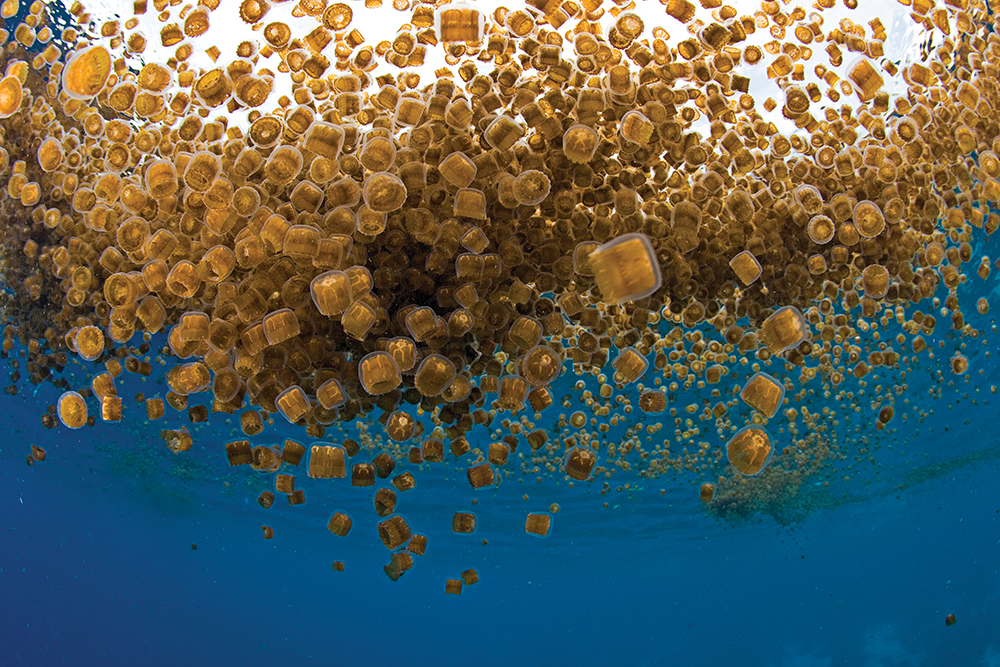 What we see before us is just one tiny part of the world… The real world is a much darker and deeper place than this, and much of it is occupied by jellyfish.
~ Haruki Murakami

Nicknamed more for their size than any connection to actual lice, sea lice are the very tiny offspring of jellyfish and sea anemones. While they look like specks of pepper out of the water, they are near-invisible once submerged, sometimes becoming quite a nuisance to swimmers. The primary offenders in Gulf waters are the larvae of the thimble jellyfish, Linuche unguiculata. **Side note: there is also a crustacean known as sea lice, but it’s a parasite that affects fish, not people. And those are different yet from sand lice (also called sea fleas), which are another crustacean that live in wet sand. Common names can sometimes cause quite a lot of confusion between species!

Thimble jellies are so named for their radially symmetric bell (the main body that the tentacles attach to). The bell has straight sides with sixteen grooves, sixteen lappets (folds), a flat top, and can be up to half an inch wide and almost an inch tall. In the grooves between the lappets are alternately eight tentacles and eight rhopalia. The tentacles are quite short and not easily noticeable. Rhopalia are sense organs, and each rhopalium includes statocysts (for equilibrium and balance), two sensory pits (concentrated areas of sensory cells), and occasionally an ocellus (simple, photoreceptive eye). With the rhopalia, thimble jellies can respond to gravity, light, touch, various chemicals, pressure, and temperature. There is one mouth in the center on the underside of the bell. The bell has a transparent outer coating, but symbiotic zooxanthellae (photosynthetic algae) attach to the surface, giving thimble jellies an overall brownish color. The inside surface is white with spots of green and brown.

Adult thimbles are prevalent in the warm waters of the subtropics and tropics. While they prefer shallow waters, they can live even in the abyssopelagic depths (almost four miles down). Buoyancy, light, pressure, prey abundance, temperature, salinity, and oxygen gradients affect their depth ranges. Their primary prey consists of crustacean plankton, including copepods and barnacle larvae. They also rely on the zooxanthellae, as these algae can produce organic food during photosynthesis. Phosphate, ammonium, nitrate, and amino acids they absorb directly from the seawater. One means of locating prey they make use of is chemical stimuli. Thimbles begin feeding by pulsating their bell, creating a flow that draws in water. Then the thimble extends four fishing tentacles and waits for prey to pass by. If prey comes into contact with one or more of the outstretched tentacles, nematocysts (stinging barbs which cover the tentacles) discharge and ensnare the hapless creature. The tentacles then draw the tasty morsel into the mouth. These same nematocysts are used as a defense mechanism against predators. Spadefish, sunfish, sea turtles and other marine organisms prey on adult thimbles. Nudibranch sea slugs consume juveniles.

Seasonal reproduction begins in the spring and early summer months when mature thimbles form aggregations in the northern Atlantic. These formations increase sperm concentration and improve reproductive success. Thimbles are dioecious (separate sexes). They are also polygynandrous, meaning males and females have multiple mates. In March and April, large aggregations of almost half a square mile have been recorded in the Atlantic Ocean and Caribbean Sea. Four gastric pouches, each containing two gonad reproductive organs, connect with the stomach lining in mature thimbles. During reproduction, the male releases sperm out of his mouth into the open seawater. Some of the swimming sperm are swept into the female's mouth and then into her gastric pouch. Fertilization is internal. Early embryonic development of the zygotes begins inside the female, in brood pouches along the oral arms. Small, flat, free-swimming larvae (called planula) form and swim from the female back into the water. After several days the larvae settle and attach themselves to a hard, sedentary structure on the sea floor. They then begin a stage in their life cycle called scyphistoma. During this stage, the free-swimming larvae gradually transform into polyps. The polyp is composed of hard, thin tubes of chitin, taking on a hydra-like stalk form and growing up to six inches tall. Polyps sometimes reproduce asexually to form polyp colonies before completing growth to the medusa (the final adult form). Eventually, the fully developed polyps undergo strobilation, developing a stack of saucer-like buds. Each bud develops into a tiny jellyfish, breaks off from the stack, and becomes a free-swimming young ephyra (a larval form that resembles a tiny version of the adult). After a few weeks, the young ephyrae will grow into medusae, completing the life cycle. Thimble jellies do not care for their young once they reach the first free-swimming phase. Offspring can end up with zooxanthellae from their mother's supply, even though the mother doesn’t intentionally supply them. Specific information on the longevity of thimble jellies is not known, but the lifespan of a typical jellyfish is a few months.

Planula and ephyrae larvae are the main culprits behind sea bather’s eruption, a rash that generally appears about 24 hours after swimming in the bays or Gulf. Though it’s a far more common appearance along Florida beaches, it’s not unknown to other Gulf states. Thimble larvae become trapped under swimsuits, t-shirts, etc. and fire their nematocysts. Unlike full-grown thimbles, the sting from a larval jellyfish is not usually immediately noticed. The rash generally forms around areas where clothing is tight (kind of like chiggers) because these are the most likely areas for the jellies to be squished. The main symptoms are just redness and itchiness, though some people do experience fever, chills, headaches, or nausea. Just like insect bites or poison ivy, everyone reacts a bit different. However, seabather’s eruption has never been reported to cause death, and symptoms typically clear up in two or three weeks. It’s also seasonal, peaking between May and August when thimble larvae are likely to be in the Gulf. To reduce your chances of being stung, avoid loose clothing that might trap the larvae against your skin, change out of your swim suit soon after you’re finished swimming, don’t towel off before rinsing because that mechanical stimulation can trigger the nematocysts, and preferably rinse in quite hot water since cold or lukewarm fresh water can also activate the stingers. And remember to wash your swimsuit before wearing it again! If you do end up with the rash, over-the-counter antihistamines, hydrocortisone creams, and calamine lotion can be used to mitigate mild symptoms.

Sea lice aren’t the only culprits of rashes after swimming though. Some arthropods leave bites that look awfully similar to seabather’s eruption, though their bites will be in grouped configurations of three. Swimmer’s itch has a similar morphologic presentation but is caused by larval schistosomes (parasitic flatworms) that invade the skin, and they are only found in fresh water. Even seaweed caught under your swimsuit can cause dermatitis that resembles sea lice stings. At least you can take consolation that occurrences of seabather’s eruption in Texas waters are less common, and that thimble jellies aren’t actively out to get you.

I always try to remind folks that jellies have no control over where the currents take them or even over their own stinging cells. They are almost completely automated and at the mercy of the currents. We just happen to be in the wrong place at the wrong time when we get stung.
~ Sharyl Crossley, senior aquarist at the Tennessee Aquarium in Chattanooga

Where I learned about sea lice, and you can too!