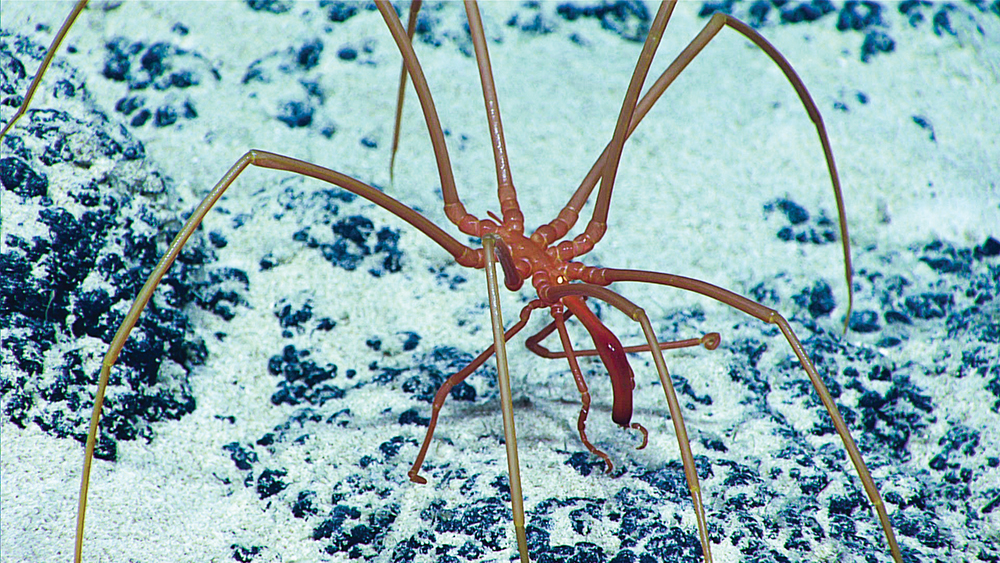 Few invertebrates from land or sea play the sinister role as often as the spider. Luckily for arachnophobes, sea spiders aren’t true spiders, though their classification as chelicerates places them closer to spiders than to other well-known arthropod groups, such as insects or crustaceans. The subphylum Chelicerata is comprised of roughly 100,000 described species and includes sea spiders (class Pycnogonida), the extinct sea scorpions (class Eurypterida), horseshoe crabs (class Xiphosura), and the huge group of terrestrial and aquatic mites, spiders, and scorpions (class Arachnida). There are about 1350 known species in class Pycnogonida, give or take. Approximately 58 species live in the Gulf of Mexico, and about 8 of them occur near Texas. Sea spiders are found all around the world from shallow shorelines to deep abyssal trenches. While most are epibenthic (living on top of the bottom sediments), a few are interstitial (living between the individual grains of bottom sediments).

The typical pycnogonid looks like an emaciated spider on hinged stilts. Their body is little more than a place for the legs to be attached. Pycnogonida even translates from the Greek pykno + góny to ‘lots of knees.’ Leg spans range from 1 mm to nearly 3 feet, though most are on the small end of this range. Some sea spiders are so small that each of their tiny muscles consists of only one single cell, surrounded by connective tissue. The larger species are mainly found in the Antarctic and deep seas. Pycnogonids do not show an arachnid-like division of the body into two clear halves. The first four segments are fused together and form a ‘head’ region, usually referred to as the cephalon. On the cephalon, there is an eye turret called an ocular tubercle. This normally supports four simple eyes and gives the animal a 360 degree arc of light detection. The cephalon also bears the chelifores, roughly equivalent to the chelicerae of arachnids. The chelifores are usually composed of three or four segments. In some species, the chelifores are reduced to stubby little structures, and in others they are missing completely. The chelifores are followed by the palps, similar to the arachnid pedipalps. Also on the cephalon are two features unique to sea spiders, at least among chelicerates: two ovigers and a proboscis. Short for ovigerous legs, the ovigers are between 5 and 10 segments long, often with a claw at the end. Not all sea spider species have them, and in many species they are only present on males. In females, and outside the breeding season, they are used for grooming and cleaning. However, during the breeding season the males first use them in their courtship of the females, and then to carry the eggs around until they hatch. The proboscis varies in size and shape between species but is basically a tube-like projection with a triangular mouth at the end. The internal structure of the proboscis, and in fact the sea spider’s whole feeding apparatus is trifoliate (having three parts), reflected by the three “lips” found at its tip. The lips are sometimes armed with teeth and/or spines. The proboscis can move up and down a bit, and sideways even less. In species lacking chelifores and palps, the proboscis is well developed and more mobile and flexible, often equipped with numerous sensory bristles and strong rasping ridges around the mouth. It’s used to mix digestive enzymes into the food and to suck up food into the gut.

The final appendages on the cephalon are the first pair of walking legs. These typically have nine segments. Though the legs are short and stubby in some species, they are long and slender in most. They can be quite spiny, and usually end in claws. The cephalon is followed by a series of three short trunk segments, each bearing another pair of legs, totaling eight walking legs. A few species, however, have ten or even twelve walking legs in total. The legs include within their interior space not only the muscles and nerves that allow them to move, but also extensions of the gut and of the reproductive organs. This is necessary because the body has become too small to house these organs. Sea spiders also do not possess a specialized respiratory system. A very thin cuticle covers the body, and gas exchange takes place through its surface. They pass oxygen to their extremities via their gut fluids, rather than the substance they have in lieu of blood (called hemolymph). While sea spiders do have pumping hearts, the hemolymph they pump circulates only around the center of their bodies and the uppermost parts of the legs. The main stretch of their legs receives oxygen through hemolymph and gut fluids powered by peristalsis (a radially symmetrical contraction and relaxation of muscles that propagates in a wave down a tube). Essentially, the heart powers the movement of oxygen to the core of the body, while the gut powers the movement of oxygen throughout the legs.

Behind the legs is a small tailpiece, sometimes called the abdomen. This piece has no real function, and simply contains the anal opening. However, some fossils have three to five ring-like segments here instead. Two fossils from the Devonian Period of Germany even have tails. In one example, the tail is a pointed spine, with the anus opening halfway along. In the other example, the tail is long and whip-like with many short segments, quite similar in appearance to the flagellum of whip scorpions. The modern sea spider body is contained in and supported by a non-calcareous exoskeleton built of a thin, waxy epicuticle; a thicker hardened exocuticle and a softer, more flexible endocuticle. Joints are moveable where the flexible endocuticle is present. The cuticle also contains many pits and hairs, which presumably act as tactile and chemosensory organs, although little is currently known of their function.

Some sea spiders have beautiful, bright colors coating their legs and body – purple stripes, bright yellow solid bodies, black and white stripes – but most are white or cream colored, or camouflaged to match the colonies of animals they feed on. They mostly walk or crawl, though some swim a bit using an umbrella pulsing motion. Their small size and camouflage make them difficult to spot, though they’re not uncommon along shorelines, in tide pools and such. Overall, they tend to be rather ponderous, slow-moving creatures. In keeping with their relative lack of movement, sea spiders typically prey on sessile (non-moving) organisms such as cnidarians, sponges, and polychaetes. They simply stick their proboscis into the victim and suck up the fluid contents, though some species make more of an effort and attack active prey, such as worms, by grabbing them with their chelifores. A few species browse on bryozoans, algae, or detritus. Food is either macerated with chelifores or externally predigested and then sucked into the digestive tract with a proboscis. Sea spiders can only feed on liquids, and part of the proboscis close to the body contains a pharyngeal filter, also called the “oyster basket,” composed of densely packed bristles that are used to filter out or grind ingested solid particles. Although they feed on larger animals, such as sea anemones, by inserting their proboscis into the animal, many prey survive the ordeal, making some sea spiders parasites, rather than predators. In fact, larval sea spiders often live as parasites within cnidarian (jellyfish, corals, anemones, etc.) tissues. Adults often have taste preferences for a particular type of prey that developed from their juvenile feeding habits. Many sea spiders appear to be specialized for feeding on a single taxonomic group. Like other specialized feeders, individuals of these species may even be unable to survive if their preferred prey starts to disappear. Differences in feeding preference often correspond to differences in proboscis and chelifore morphology, such as extremely thin proboscides in bryozoan feeders. Sea spiders don't usually turn up in the gut of fish. When they do, it’s probably accidental predation, when the animals they’re sheltering in are eaten.

Most pycnogonids are gonochoristic, meaning they have separate sexes, though at least one species is hermaphroditic. After a courtship (that is still undocumented), both males and females release their gametes in to the environment, where the fertilization occurs. Once fertilized, the eggs are gathered by the male who will care for them until they hatch (or slightly longer, in some species). He binds them together and attaches them to his ovigers by a sticky substance he secretes from his femurs. Instances of multiple mating partners by both sexes have been observed, but males do not mix eggs from different females in the same clusters – clusters are laid chronologically starting from the end closest to the body. One Phoxichilidium femoratum male was observed with 14 egg clusters. Ladies…

Sea spider larvae are either obligate parasites or lecithotrophic (receiving nutrition only from the yolk), and if the former, are deposited on their hosts by the male at the appropriate life stage. There are no known planktonic or nektonic phases. The larva has a blind gut (one opening only) and the body consists of a head and three pairs of appendages – the chelifores, palps, and ovigers – which they use to attach to their host. The other body segments and legs develop later.

As they rarely occur in prolific numbers, sea spiders have little economic significance. However, their distribution and diversity make them useful for studying evolutionary history. Large-scale events, such as glaciations and the isolation of Antarctica by the Antarctic Circumpolar Current, can be tracked by trends in the distribution of invertebrates like sea spiders. And thus, the spider makes its mark.

Where I learned about sea spiders, and you can too!

All You Need is Biology
allyouneedisbiology.wordpress.com/2015/12/21/pycnogonida/