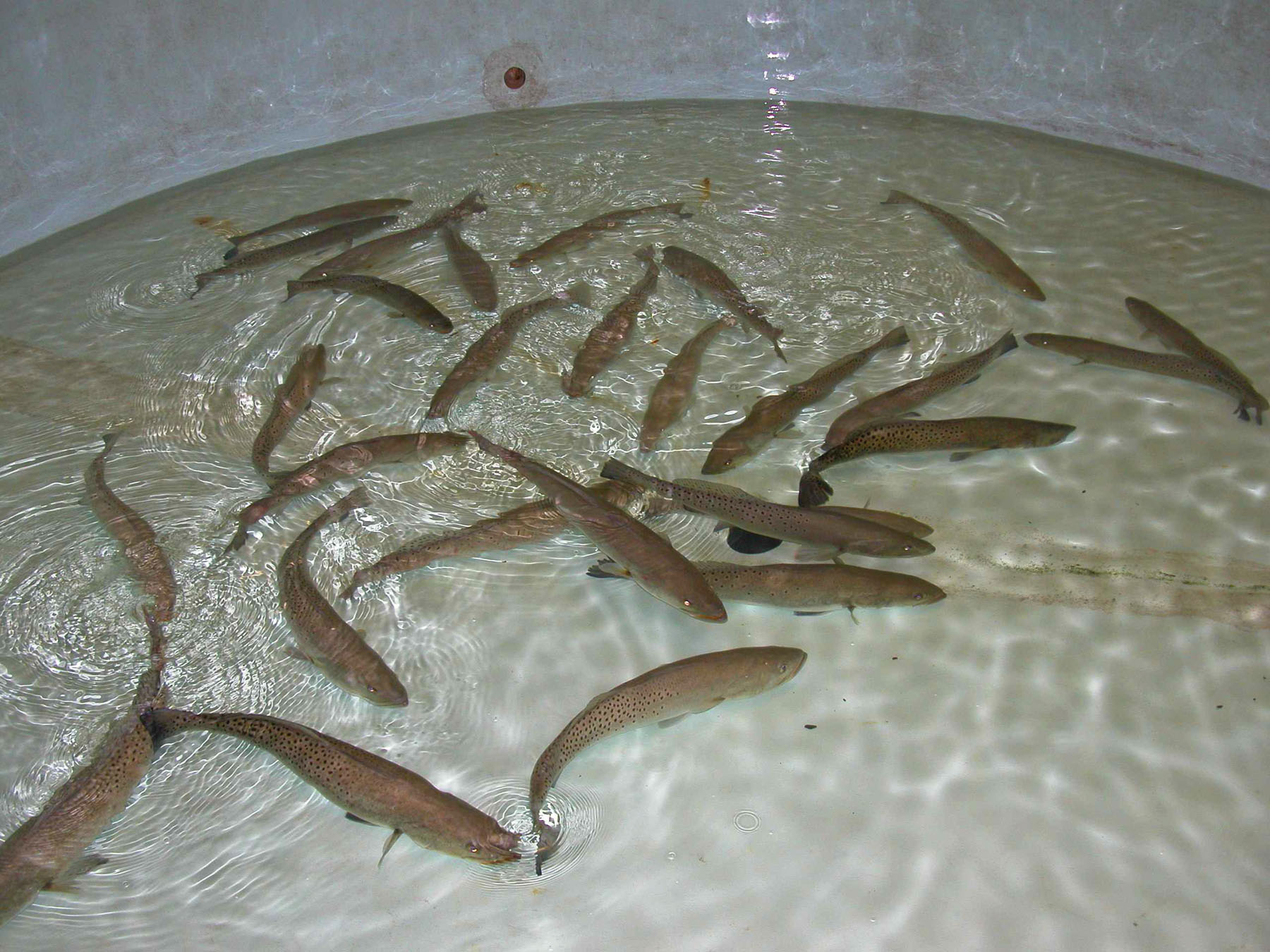 Brooder fish in the TPWD hatcheries.
The spotted seatrout. Genus: Cynoscion, so named for their tender mouths which hooks tear easily from.(1) Family: Scianidae, or drum and croaker family. That's right, the spotted seatrout is actually NOT a trout, but a drum. Like all varieties of this family, the male seatrout has a special set of muscles that are easily visible within the body cavity, and by vibrating these muscles against his gas-filled swim bladder, he produces a drumming sound to attract females.(2)

Seatrout reach sexual maturity in one to four years, with the males maturing earlier than the females. Two, three, and four year olds make up the bulk of the spawning population. Three-year-old sows, because of their abundance, spawn the highest percentage of eggs, "and thus have the greatest reproductive potential of all age classes."(3) Sexually mature females can spawn anywhere between nine and sixty times in a season, releasing anywhere from three- to twenty-million eggs a year!(3)

The spawning season for specks is, well, two seasons: spring and summer, beginning mid-April and lasting through mid-September, with peak production occurring May through July. During spawning, seatrout will usually congregate near shallow grass beds, in estuaries, and around shallow structures where their young will have food and shelter.(4) Males begin drumming around sunset, and spawning continues for several hours into the night. Constant milling and light, side-to-side body contact stimulate the release of sperm and eggs into the water where fertilization takes place.(5) Because newly hatched spotted seatrout are susceptible to cold and unfavorable salinity, spawning takes place in water temperatures between 70 and 90 Fahrenheit and in an optimum salinity range of 17 to 35 parts per thousand.(8) The magic equation for creation. Seatrout are classified as pelagic spawners, meaning they spawn and move on with no preparation of a spawning bed or attempt to guard eggs and/or protect larval offspring.

Spawning season is also the height of fishing season for spotted seatrout. Experienced anglers know all the best ways to catch spotted seatrout, that knowledge partly coming from an understanding of the fish. Like many other creatures, seatrout instinctively measure the amount of effort it will take to catch a meal, and whether or not that meal is worth expending the energy. Big trout tend to be couch potatoes, often preferring a few large, slow-moving meals over several smaller, quicker ones.(6)

However, if you prefer a chase, excited specks are sometimes easy to find. Besides observing the feeding behavior of gulls, terns, and pelicans that flock to take advantage when specks push forage species to the surface, anglers can also sniff out a seatrout slick. Trout have a wonderfully smelly habit of regurgitating when they're stuffed full and wired up; then that oily, partially digested food rises to the surface.(7) Smells like watermelon (yum), or fresh-cut grass...

When you land your spotted seatrout, remember to wet your hands before hauling her up for a photo shoot (the best catches are always females, right?). That slime on her body is akin to her immune system; it's germ protection.(6) The more slime on your hands, the less on her body. Wetting your hands minimizes slime loss, increasing her chance at staying healthy to produce the next round of couch potatoes.