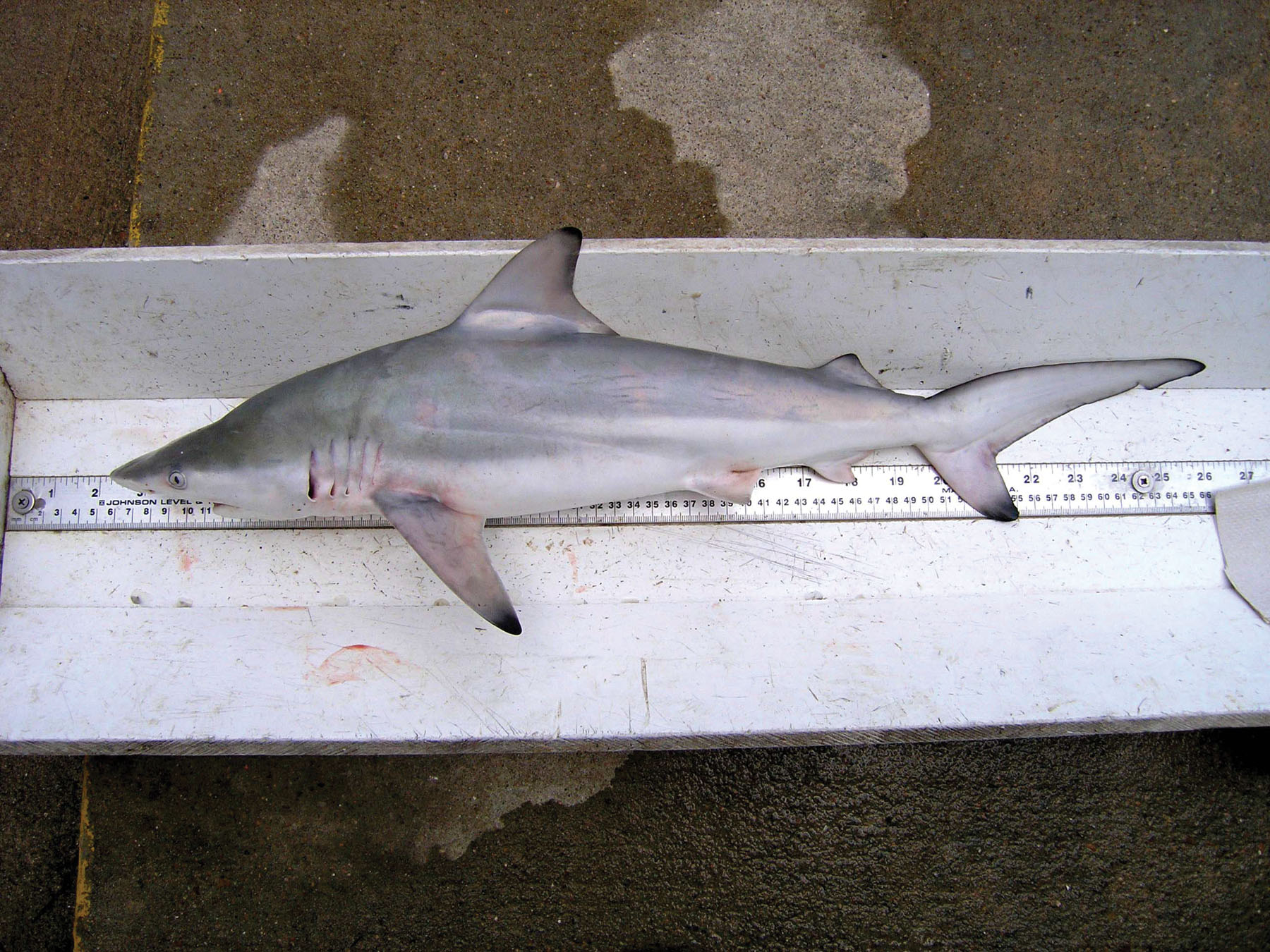 Blacktip | Photo credit: Brenda Bowling, TPWD
Sharks reside in nearly every marine environment on Earth (and even some freshwater ones). Having had millions of years practice at adaptation, sharks are often top predators in their environments. Some, such as the great white, are even classified as super predators, but even these giants are in equilibrium with the populations of their prey and play a crucial role in maintaining a stable ecosystem. Because they usually hunt the weak, sick, and old, sharks also help maintain the overall health of the prey population. Sick and weak individuals have less chances of reproducing and passing on their genes when they're on the menu.(1) This means that the fish people catch are more likely to be happy, healthy, and delicious!

Of course, sometimes fishers don't reel in the entire catch they hook. Sharks do occasionally take a fee for their ecosystem-stablizing duties. As explained by Walter Bubley, Ph.D. and Natural Resources Specialist for the Coastal Fisheries Division of Texas Parks & Wildlife, since sharks live in or at least pass through every area people fish, the ones most likely to interact with people are the most populous. Reef fishers are most likely to share their catch with one of the most abundant sharks, the Atlantic sharpnose. Fishing in bays and near shore could result in quality time with black tips and bull sharks.(2) These three species are common, but certainly not the only residents. Devil's Elbow, which ranges from Corpus Christi down to Tampico, Mexico, is one the Gulf Coast's most shark-laden regions.(3)

But despite their numbers and tough reputation, sharks are very vulnerable to fishing pressure because they 1) grow slowly, 2) take many years to reach reproductive maturity, 3) often do not reproduce every year, 4) have small numbers of young per brood, 5) need specific nurseries such as estuaries, and 6) are killed in many types of fishing gear such as gillnets, trawls, etc.(4) Knowing more about these predators is the first step in successful shark angling and conservation. It's good to meet all your neighbors, but for now, I'll just introduce the aforementioned three.

Atlantic Sharpnose
Sharpnose sharks are so named for their characteristically long, surfboard-like snout, which is longer than it is wide, matching the rest of the shark's streamlined body. Corresponding points on the sharpnose's snout are equidistant from each other. This is a considered a small species of shark, reaching only about three and a half feet in length. Like other small sharks, it's only about midway up the food chain. Sharpnoses, along with many others in the family Carcharhinidae, are frequently referred to as sand sharks because members of this family look very similar and are difficult to identify, even out of the water. Atlantic sharpnoses are also commonly mistaken for young blacktip sharks because of their dark-tipped dorsal fins.(5)

Atlantic sharpnoses are the most commonly caught small coastal shark species. The meat is sold for food and as bait for larger sharks, but their small fins make them less valuable commercially than larger edible sharks. Large quantities are also caught as bycatch in shrimp fisheries and drift gillnet gear.(6)

A common resident of surf zones, Atlantic sharpnoses also visit estuaries and harbors, especially for nurseries Though they can tolerate low salinity, the don't plan excursions into freshwater. As previously mentioned, this shark also cruises Gulf reefs for easy meals, courtesy of recreational fishers. Currently, the Atlantic sharpnose is listed as "Least Concern" by the World Conservation Union (IUCN), a global union of states, government agencies, and non-governmental organizations that assess the conservation status of species.(7) Atlantic sharpnoses are not considered overfished now, but there are fishing regulations in effect; check with Texas Parks & Wildlife for daily bag limits before fishing for any shark.

Blacktip
The blacktip shark is named, appropriately, for its black-tipped fins. It has a stout body with a somewhat long, pointed snout and grows to a bit over eight feet. It's similar to, and often mistaken for, the spinner shark, which also flaunts black-tipped fins. However, the blacktip shark is missing a black tip on its anal fin; the spinner shark has that. Both species are known for leaping out of the water and rotating before dropping back into the sea. This behavior results from their feeding methods where they rocket themselves vertically through a school, spinning and grabbing fish 360 degrees, and hit the surface still going full throttle.(7)

Adult blacktips' only common predator is man, and these sharks are more abundant in the central Gulf of Mexico than any other region. (Note: commercial shark fishing is not prominent in Texas waters, but blacktips are popular in the small industry.) In fact, blacktips are the second only to sandbar sharks in commercial fishery importance, and their meat is valued more. In the US, meat from other sharks of the same family is often labeled as blacktip shark because of the wide consumer preference. (Hmm, mislabeled food products? What a surprise!) The meat is locally eaten for the most part, though the fins are often shipped to Asian markets for use in shark fin soup. Some areas also harvest the hides for leather and extract oil from the livers.(6)

Blacktips inhabit warm and temperate inshore and offshore waters, but are not a truly pelagic species. Though often spotted in the brackish waters of estuaries, mangrove swamps, and river mouths, they don't really penetrate into freshwater. Blacktips are currently managed by multiple organizations including the Texas Parks & Wildlife Department, the National Marine Fisheries Service, the Large Coastal Shark Management Group, and the IUCN, which lists the species as "Near Threatened" throughout its range, though the status of blacktips in the Gulf of Mexico is that they are not presently overfished.(7)

Bull Shark
Lastly, the notorious bull shark, the boss of the Gulf. This is a relatively large shark, up to twelve feet in length, with all the attitude of a great white but not quite the reputation. They are named for their belligerent disposition, their tendency to head-butt potential prey, and their short, blunt snout. (Ironically, their genus name, Carcharhinus, means "sharp nose" in Greek.) They have thick, stout bodies, dark-tipped fins, and relatively small eyes.(8)

Bull sharks have a remarkable quality shared by none of their cousins; they can live in freshwater. They have been reported over 2,300 miles up the Mississippi River, and over 2,600 miles up the Amazon River! They've been found in lakes in Australia, New Guinea, the Philippines, Asia, Africa, and the Americas (North, Central, and South). Bull sharks can really live all over the world. Having such a range of habitat allows them access to a greater variety of prey, which they take full advantage of.(9) Bulls don't necessarily, or even commonly, live most of their life in freshwater though. Freshwater is simply another habitat they take advantage of. They always return to estuaries and other brackish water to give birth, probably because young bull sharks are not born fully able to process freshwater like their parents.

The bull shark is a commonly caught shark. Though they're not specifically targeted in most commercial fisheries, they're regularly caught on bottom longline gear. Like the blacktip, their meat is mostly eaten locally, the fins are shipped to Asia, and the hide is good quality leather. Additionally, bull sharks are popular game fish. Because they are unpredictable, sometimes aggressive, and often dwell in highly populated areas, both marine and freshwater, bulls are considered more dangerous than their Hollywood cousins, the great white and tiger sharks. Though humans aren't on the menu, per se, we do happen to be about the size of other prey items, and bull sharks are very opportunistic feeders. However, it's becoming painfully clear that the freshwater habitats bulls are so fond of are degrading from pollution and other impacts of human expansion. We may prove to be a greater danger to bull sharks than they ever were to us. Currently, the bull shark is listed by the IUCN as "Near Threatened."(7)

Bull sharks, blacktips, and Atlantic sharpnoses are three of the more common sharks you're likely to meet on the Texas coast or in the Gulf. All three are integral parts of the ecosystems they inhabit, as are all the other sharks you'll ever meet. We all benefit from the roles they play in the environment and the economy. Plus, they're fun to watch, catch, and make up stories about, so let's make sure they stick around!