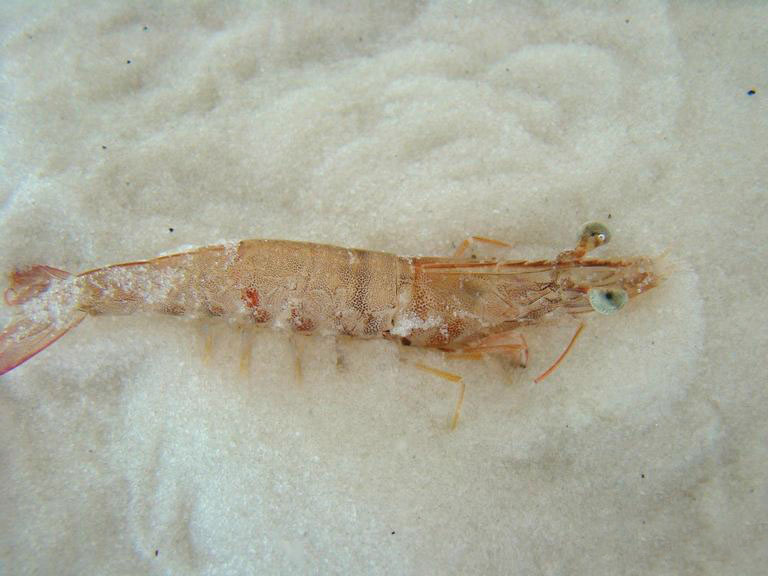 Shrimp is on everyone's mind. And if it's not on your mind, it's probably on your plate. The major role shrimp play in the local ecosystem is food. Yes, they are most valuable as dietary support for the growth and survival of larger species. "Everything from mites to elephants and from larvae to whales must have food to survive. For us, bread is the staff of life. For fish, it is shrimp."(1) They do have another important task: recycling basic nutrients by feeding on organic matter in the sediment. It's a thankless job, one the white shrimp, in particular, usually gets stuck with.(2)

Brown, white, and pink shrimp make up the vast majority of local shrimp that end up in your stir fry (though most shrimp consumed in the US are imported), and the life cycles of these three are essentially the same. Each species spawns in the Gulf of Mexico; larvae are swept into bays and estuaries by tides and currents. Once ensconced in the nurseries, young shrimp grow quickly and emigrate back to the Gulf when they are about 3-5 inches, depending on the species.

Now for some specifics: brown, white, and pink shrimp begin their lives in the Gulf of Mexico. Females of all three species release between 100,000 and one million eggs, which hatch within 24 hours.(3) Spawning of white shrimp occurs between April and October, and the highest concentration of young are swept into bays and estuaries during the summer. Brown shrimp spawn in late winter, and larvae begin entering the bays and estuaries during February and March. Pink shrimp (also called hoppers) spawn year round,(4) but the highest influx of larvae into nursery areas occurs in the fall. The growth rate for each species is highly variable, dependent on such factors as water temperature and salinity. Adolescent shrimp grow much more rapidly than adults, but both increase in size by molting their shells and getting larger before the new shell hardens.(3) Brown shrimp typically don't grow larger than seven inches, pink can reach about 8 inches, and white (also called jetty shrimp) can grow to over nine inches.(2) Both brown and white shrimp females reach sexual maturity at about 6.5 inches; pink shrimp females reach theirs at 3.5 inches.(4) Brown shrimp can live up to two years, but white and pink shrimp are an annual crop.(2)

When in inshore waters, brown and white shrimp prefer areas with muddy or peaty bottoms, though brown shrimp prefer the saltier, seagrass-filled water of estuaries while white shrimp gravitate to the fresher upper bay areas, sans seagrass. Offshore, they're most commonly found over soft bottoms of mud, sand, and shell. Pink shrimp, on the other hand, prefer bottoms of hard sand and calcareous shell. All three species are omnivorous, feeding on organic debris and small organisms. They are prey for almost any larger carnivorous or omnivorous predators. Brown shrimp are grooved on the back surface of the shell next to the rostrum and commonly have green or red coloration on the tail. Pink shrimp are also grooved on the back and sometimes sport a dark spot on either side. The tail usually has a dark blue band. White shrimp are not grooved, unlike brown and pink, have much longer antenna (three times longer than the body), and have green coloration on the tail. All three species have ten long, slender walking legs and ten swimming legs.(2)

As dinner is the main reason for existence if you're a shrimp, it's not surprising that food is also the primary reason humans fish for shrimp. In 2001, shrimp surpassed canned tuna as the most popular seafood item in the US.(1) Texas is certainly no exception as our shrimp fishery is one of the largest seafood industries in the country. Of course, brown, white, and pink shrimp account for a majority of the Texas commercial catch, ninety-nine percent, in fact.(4) Of that ninety-nine percent, brown shrimp make up the majority and pink are just barely represented. The one percent "other" commercial catch consists of seabobs, rough back shrimp, royal red shrimp, and rock shrimp. And there are some noncommercial shrimp caught in the sidelines, grass shrimp being the most common of these.

With few exceptions, shrimp are caught commercially with trawls. Before trawls, shrimpers dragged long seines set close to shore. Then, shrimping was only a worthwhile endeavor while white shrimp were abundant near shore.(3) However, even with the many improvements, trawling doesn't meet the growing demand for shrimp. In Texas, half the shrimp sold come from farms, but domestic farms and trawling combined don't meet the rising consumption of shrimp in the US. Over eighty percent of the shrimp bought in the US is imported, and most of those come from farms as well.(1)

Both trawling and farming have some cons attached to them (the pros being fairly obvious). While trawling can affect the seabed in a variety of ways, more likely to be monitored is the bycatch. In the Gulf of Mexico, only about sixteen percent of a shrimper's catch is commercial shrimp. Sixty-seven percent is finfish, and most of the remainder is invertebrates. This is more serious for some species than others. For instance, brown shrimp bycatch is one of the primary sources of red snapper mortality in the western Gulf. To reduce this and other impacts, bycatch reduction devices and turtle excluder devices are required. In addition to bycatch, shrimp overfishing can decrease predators' food sources, possibly leading to significant changes in community structures, the results of which can't always be predicted.(2)

In farming, waste water runoff can pollute nearby coastal waters, diseases from the farmed shrimp can spread to local native populations, and exotic species introduced for culture can escape and become destructive, invasive species in native habitats.(1) Despite these effects, through mindful management programs and because of the fact that environmental problems lead to shrimping failure, both trawling and farming can continue to evolve into more sustainable industries.

All the services we install to settle an area, roads, sewer facilities, power plants, etc., unavoidably impact the surrounding environment and affect the populations of native species. Life history, such as habitat, growth, feeding, and reproduction, of a species lead to how a fishery is managed. By altering fishing regulations to offset natural and human-induced imbalances, the abundance of fast-growing, short-lived species, like our shrimp, can be managed relatively quickly.(2) TPWD took over management of the shrimp fishery in Texas bays in 1985. Since then, TPWD has had some success in shrimp management by adopting and refining fishery regulations and introducing the shrimp vessel license limited entry and buyback programs. By 2008, the shrimping effort had decreased ninety-one percent since 1994. The goals of all these changes are to reduce overfishing, to increase the industry's economic value, to reduce bycatch, and ultimately to promote the sustainability of shrimp stocks.(4)

In the Gulf of Mexico, the shrimp fishery is managed by the Gulf of Mexico Fishery Management Council, which often works in conjunction with the State of Texas. The goals of its fishery management program are similar to TPWD's: enhance yield, in volume and value. The Council, in cooperation with the State of Texas, annually closes the shrimp fishery off Texas to allow brown shrimp to grow into mature adults, providing a more valuable harvest size overall and lessening the waste of shrimp that would have been discarded due to small size. Brown shrimp levels are monitored annually and haven't been classified as overfished for forty years.(1)

That's good news for your next shrimp cocktail.


Where I learned about shrimp, and you can, too!

(1) "Invertebrates: The Other Food Source," Oceanography in the 21st Century, 22 August 2011 <http://oceanworld.tamu.edu/resources/oceanography-book/invertebrates.htm>.