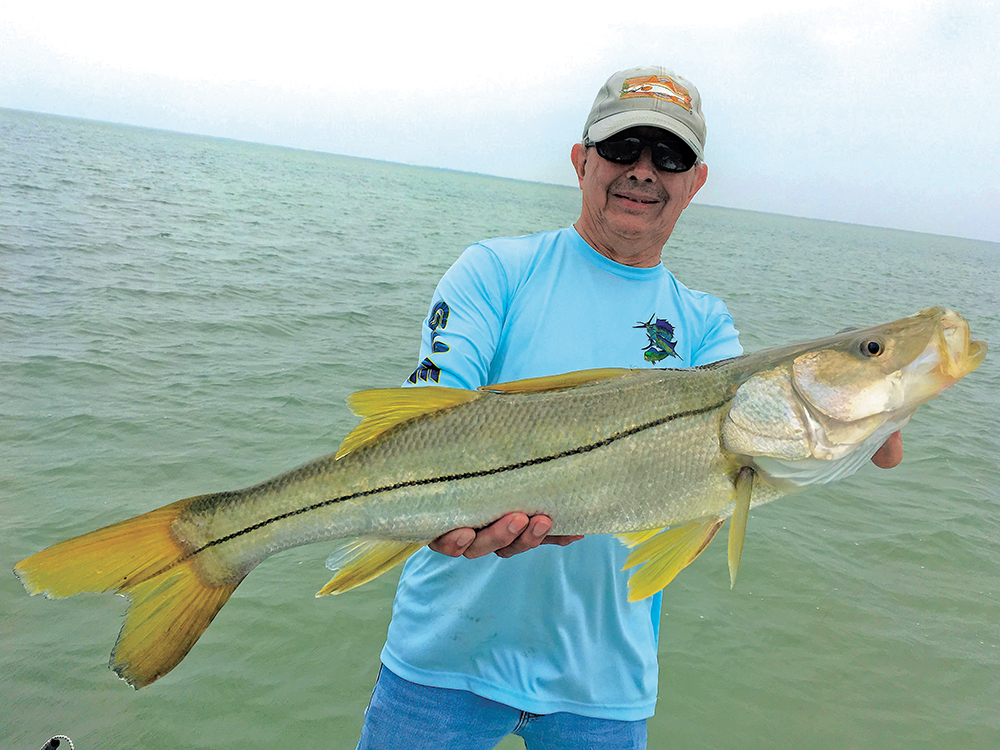 The fish we in Texas call snook is usually the common snook, Centropomus undecimalis, though there are a couple other species of fat snook that occasionally make an appearance. These species rarely grow to 24 inches, while the common snook can reach over 40 inches. Centropomus is the only genus in the snook family, Centropomidae. They are distinguished by having two-part dorsal fins, a lateral line that extends onto the tail, and frequently, a concave shape to the head. Common snook are a slender golden-yellow fish with a pike-like body, a protruding lower jaw, and a distinct black lateral line. Ocean snook tend to be more silvery yellow, and river specimens may be considerably darker in color. The meaning of their name, Centropomus undecimalis, is a bit tricky. According to the University of Florida, “centro” comes from the Greek, kentron, meaning point or spine. “Poma” refers to a cover, such as a gill plate or operculum. “Und” means wave, and “cimal” stems from the Greek, simil, which means to emulate. All together, wavelike spinygill?

Snook are euryhaline, meaning they spend time in both fresh and saltwater – never far from seawater when they’re upriver and never far from freshwater when they’re in the sea. They live in a wide variety of habitats, including river mouths, nearshore reefs, salt marshes, seagrass meadows, and along Gulf beaches, but have a preference for mangrove-fringed estuaries. Snook are tropical fish. They can’t tolerate cold water, not even for a couple days. The lower lethal limit for adults is 43° to 54° F, though they become lethargic once temperatures fall to 65° F and can begin to die at just 60° F. Unsurprisingly, temperature is a large factor in distribution. The common snook is by far the most abundant and wide-ranging of all snook species. They are found along the Atlantic coast of Florida south through the Keys. They occur infrequently between the Florida panhandle and Galveston, Texas, but are plentiful along the rest of the Gulf Coast.

Most snook are opportunistic carnivores, feeding primarily on other fish, though they will also take shrimp, crabs, and mollusks. The specific diet of the common snook varies with habitat. Snook in seagrass meadows eat mostly bay anchovy, pinfish, and penaeid shrimp. They are ambush feeders and often stake out at the mouths of inlets behind bridge pilings, rocks, or other submerged structures. There are two daily feeding peaks, one about two hours before sunrise, and the other about two or three hours after sunset. The tides also affect mealtime, with a noted increase in activity following standing flood or ebb tides. Common snook are, in turn, prey for dolphins, larger fish, and some birds, such as osprey and heron.

Though common snook spend time in freshwater habitats, they can’t spawn in them, as the sperm only activates in saline waters. Spawning begins in June or July in and around Gulf passes, and peaks from August through October. Snook hatch 18 to 36 hours after fertilization. At hatching, they are about 1.5 millimeters long and eat zooplankton. Within thirty days, they’re approaching 1.5 inches long and beginning to roam a bit, searching for larger prey, such as minute shrimp. One-year-old snook are about 7 inches long. During this first year, juvenile snook utilize estuarine habitat in the mouths of streams and rivers, depending on the reliable freshwater inflows to maintain food availability and vegetation for cover. They gain another 7 inches in their second year. From two to three years, the growth rate slows to levels that will be more-or-less maintained throughout their life. In general, they reach sexual maturity the first time at about five years old; the second time at about eight years. Yes, these fish have the delight of going through puberty twice – first as a male, then as a female – because they are protandrous sequential hermaphrodites, meaning they are born male and at some point in their lifespan change sex to female. For common snook in Texas, this usually occurs between 30 and 34 inches in length.

Through a study conducted by the Department of Natural Resources (Florida), Atlantic coast snook tend to grow faster and live longer than Gulf Coast fish, though the sizes/ages converge around ten years old, perhaps because the reduced number of fish that survive beyond age eight creates a skew in the statistics. There were no fish older than twelve years captured on the west coast of Florida (though there was a fifteen-year-old female caught on the lower Gulf Coast). Atlantic coast females regularly survive into their teens, and grow quite large. The largest, aged at eighteen years, measured 40.4 inches. However, these monsters don’t represent the limits of snook growth. The largest fish come from Central America, where there are never cold kills to wipe out the oldest survivors, and where the constantly warm waters produce rapid, year-round growth. There are reports of snook exceeding 60 and even 70 pounds, and lengths of better than five feet, being sold in Mexican fish markets. But none of these behemoths have ever been reported to the International Game Fish Association. The IGFA all-tackle record for common snook measures 54 inches, weighed 53 pounds 10 ounces, and was caught in Costa Rica in October 1978. In fact, six of the current IGFA records come from the Caribbean shore of Costa Rica, despite the comparatively minimal fishing pressure there… or perhaps, because of it.

Snook maintain a certain mystique in Texas, mainly due to their historic abundance and more recent scarcity, except in South Texas, though even there the snook remains a less-than-common catch. From the late 1800s to the early 1940s, commercial snook landings were quite large, even reaching 230,000 pounds in Port Isabel in 1928. However, in the early 1940s, commercial landings dropped to token levels, and no landings were reported after 1961. Regulations were passed in 1987 that limited the catch of snook to rod and reel only. Several reasons have been suggested for the decline of snook: range limitations due to cold temperature, high pesticide levels, disease, overfishing, reduced freshwater inflows to bays and estuaries, etc. But the actual reason for the dwindling population was never pinned down. Likely, it is a combination effect. Because of their protandrous hermaphroditism and low relative abundance, a bag limit of one snook per person per day was adopted in 1995. The combined size and bag limits aim to reduce fishing mortality for male snook, allowing more of them to get in touch with their feminine side, thereby increasing reproduction. And it appears to be working! TPWD gill net samples conducted in the Lower Laguna Madre showed a small increase in catch rates for snook in the 1990s through 2004. Some people ignore the regulations put in place to ensure survival of certain fish species, but in general, defiance is taboo among snookers. Maintaining habitat for adult and juvenile snook is equally important. Shoreline habitats, such as mangroves and healthy seagrass beds, and estuarine habitats in the mouths of rivers flowing to the Gulf are all needed for healthy snook populations. While abundance levels of the first half of the 1900s may not be seen again, even small population increases enhance the possibility of catching this elusive fish, and the occasional enjoyment of a snook fillet can be an acceptable culinary treat, even for the environmentally scrupulous.

Where I learned about snook, and you can too!