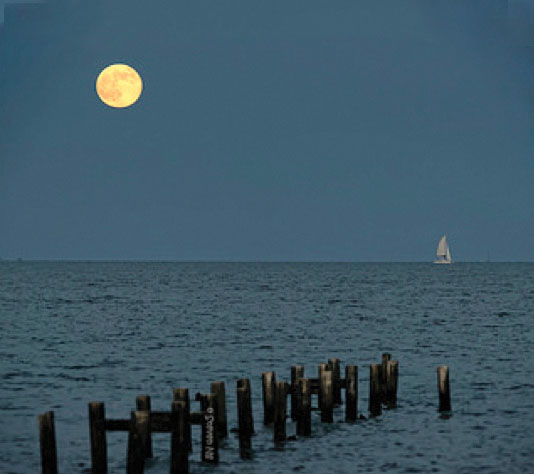 Yellow super moon rise on Galveston Bay. Photo by Steven Ng.
Full moon or new moon? Major or minor period? Which is best? Does any of this moon mumbo jumbo actually work? Solunar theory* has amassed a sizable following in many fishing communities. Nearly every fishing publication today has some kind of monthly solunar table, tide chart, moon calendar, mobile app, etc., all claiming to predict daily fish feeding activities. Many seasoned anglers swear by these moon-centered strategies. Some, however, remain unconvinced, so… just what is solunar theory?

For centuries, people living off the land have observed animal behaviors. In the woods, there are times of no perceptible noise or movement, and times of constant scurrying and singing. Many have tried to find the pattern. One of the earlier of these people was John Alden Knight. An avid fly-fisherman, Knight delved into fishing and hunting folklore, taking into account everything that could possibly have any bearing on animal behavior and, in 1926, emerged with 33 factors he believed affected fish and game's general habits. All but three were rejected: the sun, the moon, and the tide. Knight dubbed his new idea on the patterns of animal movement, the solunar theory.

The solunar theory is a hypothesis that animals move according to the location of the moon in comparison to their bodies. Although this hypothesis doesn't directly associate the boost in general activity with an increase in feeding activity, that is certainly the premise Knight used, along with most anglers and hunters. The times of day in which animals are more active are called solunar periods. There are four periods in each lunar day. Remember that a lunar day lasts 24 hours and 50 minutes, so a solar day (24 hours) will often, but not always, experience all four periods. The four periods are divided into two major and two minor periods. Major periods last about two hours and begin the moment the moon is directly above our heads and again when it is directly below our feet (the other side of the world). These are normally the hours of greatest activity during the day. Minor periods last about an hour and correspond to the rising and setting of the moon. These hours have less activity than major periods, but still more activity in relation to the rest of the day.

The solunar theory makes many assumptions based on the idea that fishes' biological clocks run on "lunar time" (unlike ours which run on solar time, or the solar day). This is used to explain why fish feed up to an hour later each (solar) day. But even if that's not the case, and the fish couldn't care less about the moon's rising, setting, or any part of its astronomical voyage, the moon's effect on the tides still make it indirectly responsible for many of the most important habits of marine life.

The dependency of marine life on tides has been well documented. For example, many saltwater fish species depend on high tides and strong tidal currents to help transport eggs or larvae from offshore regions to shallow, protected estuaries. Tides also disturb the seabed, stirring up those tasty little organisms living on the bottom. Bait fish notice this surge in activity like Pavlov's dogs hear a bell. Game fish feed on bait fish, anglers prey on game fish, and a healthy food chain ensues.

Peak times of activity occur when a period falls 30 minutes to an hour within sunrise or sunset. When moonrise or moonset take place during that same period, activity will be even greater, especially if the moon is new or full. The peak day of the month occurs during a new moon; the gravitational pull of the sun and moon work in tandem, causing the highest tides of the month. The next best day is during a full moon. The increased tidal activity during these two lunar phases is the reason many anglers recommend fishing in the days prior to, during, and following the full and new moon. The peak month of the year is June. June has more combined sun-moon influence than any other month. We know that dawn and dusk are also prime fishing times, so if it's a new moon overhead at dawn in June, it might be worthwhile to check the International Game Fish Association's record-setting regulations before going out.

Of course, even if the major period coincides with a full moon at dawn in June, your fishing trip may still go awry. After all, other factors, such as weather, air pressure, location, etc. will often override whatever the moon's effect on fishing may be. If a cold front moves in, not even two full moons will do you much good. The solunar theory points the way to the best fishing, but is not a guarantee. Solunar forecasting can take into account the normal long-range variables, but it cannot (and does not) account for short-range factors, the most common of which is weather. For best results, use solunar tables intelligently.

One important piece of information I should add – fishing by the solunar theory is not a consensual stance of the angling community. There are anglers who will confidently give you the exact opposite advice, extolling the first and last quarter moons as the most advantageous lunar phases for fishing, or asserting that full-moon fishing produces more results at night (the theory being that the moon's light lets the fish see, and feed, deep into the night, and consequently be less likely to bite throughout the following day). These differing opinions naturally lead to the question, has any of this stuff actually been proven?

To substantiate his hypothesis, John Knight attempted to systematically analyze lunar circumstances surrounding record catches (both large fish and large numbers of fish). About 90% of them were landed during the new moon, and more importantly, during the actual times of solunar periods. He also made extensive studies of game birds and found the same result. Another experiment that seems to support Knight's hypothesis was conducted by Dr. Frank Brown, a biologist at Northwestern University, Chicago. Brown ordered a delivery of live oysters to his lab near Chicago, put them in water, and removed them from all sunlight. Oysters open their shells with each high tide, and Brown wanted to observe the behavior of oysters sans tides, to see whether or not the oysters were affected by the movement of the moon. For the first week or so, the oysters continued to synchronize their shell openings with the high tides back home. But after several days, they adjusted their shell openings to when the moon was directly overhead or underfoot (two major periods of the solunar theory). These findings all clearly suggest the validity of solunar theory… but some research remains that counters the theory's main assumptions.

Sam Mossman, special-projects editor for New Zealand Fishing News magazine (as of 2013), wanted to find out if the lunar cycle held any clues for striped marlin fishing. He borrowed all the yearbooks of New Zealand's Bay of Islands Swordfish Club (the second oldest game-fishing establishment in the world), starting with the year 1929. After some number crunching, he discovered a decline in the catch rate leading up to both the new and the full moons, although the catch rate increased exponentially a few days after the full moon (which could still be consistent with solunar predictions). However, the data showed a relatively equal catch spread throughout all of the moon phases. The worst day saw 315 striped marlin caught in the Bay, whereas the best day produced 462 catches (less than a hundred more than the worst day). Overall and regardless of the moon phases, there was decent fishing to be done. Commercial fishing seems to swing both ways. One study found that most swordfish caught by longline were during the first and last lunar quarter, but albacore catch rates were the highest during the full moon.

From a scientific standpoint, the solunar theory has yet to be unequivocally proven. Any moon phase can produce trophy catches or, equally, give you the worst fishing day of the year. Plan your days on the water (or in the field) so that you are where your target is most likely to be. If solunar predictions are what make that happen for you, stick with it. But if life chores prevent you from planning your escapades in relation to a particular moon phase, don't fret. A "bad" moon phase is certainly not enough reason to cancel your trip. The best time to go fishing… is whenever you can!

* "Theory," in this context, refers to the everyday meaning of the word (an idea or speculation), not the scientific definition of a theory.

Where I learned about solunar theory, and you can too!