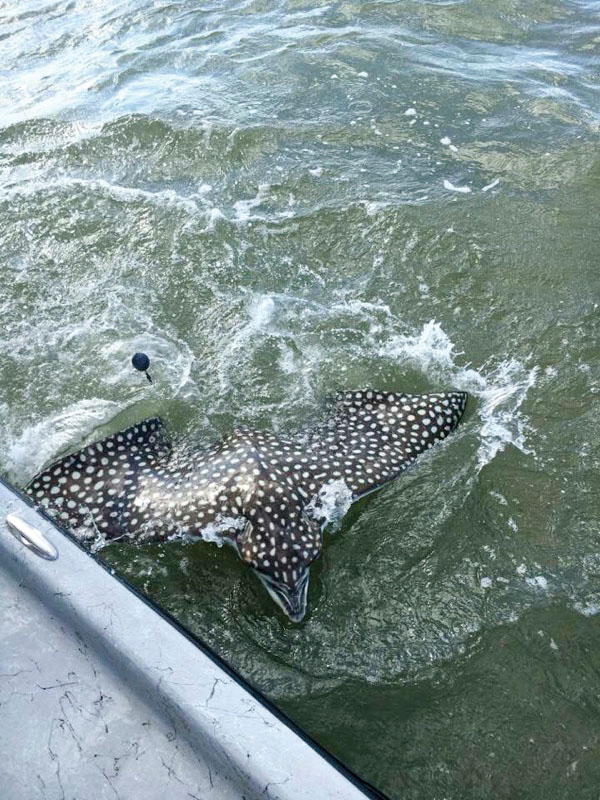 Stingrays are a well-known and common nemesis in Texas bays, but what about their less common(ly encountered) cousins? The manta ray has its own claim to fame, being the largest of the rays, and we're big on knowing the "largest" animals. Cownose rays are memorable for their mass migrations. Electric rays are, well, kind of self-explanatory. Guitarfishes and sawfishes very odd looking, won't forget one of those once you've seen 'em. How about eagle rays? The name sounds impressive, but how much do you really know about them?

Reaching nearly 11 feet across, the spotted eagle ray, Aetobatus narinari, is one of the largest eagle rays in the world, surpassed only by the manta. It can grow longer than a man is tall (over 8 feet), not counting the tail length, which can add another 8+ feet. At a recorded maximum weight of 507 pounds, you're dealing with a very large fish. The tail is whip-like and barbed, like a really long stingray tail, except the eagle ray's spines are located at the base of the tail, near the body, instead of near the tip. The spines, of which there are usually 2 to 6, are not smooth, but instead have curved lateral teeth, a forked root, and a barbed tip. Also, they are venomous.

One of the more distinctive rays, the spotted eagle ray is a dramatic dark color on top, scattered with light spots or rings. The underside is white and contains the mouth and gills. The tail also has a white base, and in freshly caught specimens, may have crossbars. Skin is smooth, lacking denticles or other poky features. Body is flat and rhomboid-shaped, making for easy flight through the water. Snout is rounded, but pointed at the tip, resembling a beak.

Spotted eagle rays are found in warm waters worldwide. Though they are generally associated with bays and coral reefs, they sometimes enter estuaries, and they often school in large groups to cross deep, open waters. Current molecular research indicates that this wide-ranging species might actually be a species complex (a group of closely related species that are very similar in appearance to the point that the boundaries between them are often unclear). Based on external morphology, coloration, parasite fauna, and distribution, there are likely at least four species of Aetobatus narinari.

Like all eagle rays, spotted eagles are active swimmers, as opposed to the closely related whiptail stingrays that lie motionless on the seafloor. Occasionally eagle rays jump out of the water. The reason why remains a mystery. Some scientists speculate that they may be females trying to avoid unwanted male attention, or they may do it to shake off parasites or remoras. Sometimes they accidentally land in boats. Fun fact: the tides influence their behavior! Apparently, high tides are the equivalent of a Red Bull.

Daily diet consists of mainly bivalves, but also shrimp, crab, octopus, worms, whelks, urchins, and small fishes. A row of broad, flat, chevron-shaped teeth in each jaw combine to form a single plate, used to crush shellfish. This ray is well adapted, with its shovel-shaped snout and duck-like bill, for digging. Feeding rays often leave craters in the sand as they submerse their large heads and excavate buried prey, spewing sand from their gills and generally dirtying up the surrounding water. When prey is caught, the ray crushes it with its plate-like teeth and spits out the shell pieces, swallowing only the slimy delicious bits. By adulthood, these rays are large enough to deter most predators, even without the venomous spines. Sharks are the exception. No surprise there. They've even been reported to follow spotted eagle rays during birthing season to feed on newborn pups.

Spotted eagle rays are ovoviviparous, meaning the eggs develop and hatch within the mother. Mother gives birth to live young. Gestation takes about a year, and a litter can be up to 4 pups, each about a foot in width at birth, perfect miniature versions of adults. They reach sexual maturity in 4 to 6 years and typically return to the same location annually to mate. Total lifespan is 15 to 20 years.

While it is not considered a food fish, the spotted eagle ray is caught as bycatch in much of its range and used for fishmeal and oil. It is sometimes fished as a gamefish and provides a good, noisy fight when captured on a line. Generally a shy and tranquil species, spotted eagles are wary of divers and difficult to approach. However, it is considered potentially dangerous to humans due to the venomous tail spines. Stings from spotted eagle rays are similar to those of stingrays and are basically treated the same.

Aetobatus narinari is currently classified as Near Threatened on the IUCN Red List and is protected in Florida State waters (no such protection currently exists in Texas). The classification is based on the species' exposure to a wide variety of inshore fishing gear (beach seine, gillnet, purse seine, benthic longline, trawl etc.), its marketability, and the generally intense and unregulated nature of inshore fisheries across large parts of its range. It is also a popular public aquarium specimen.


Where I learned about spotted eagle rays, and you can too!