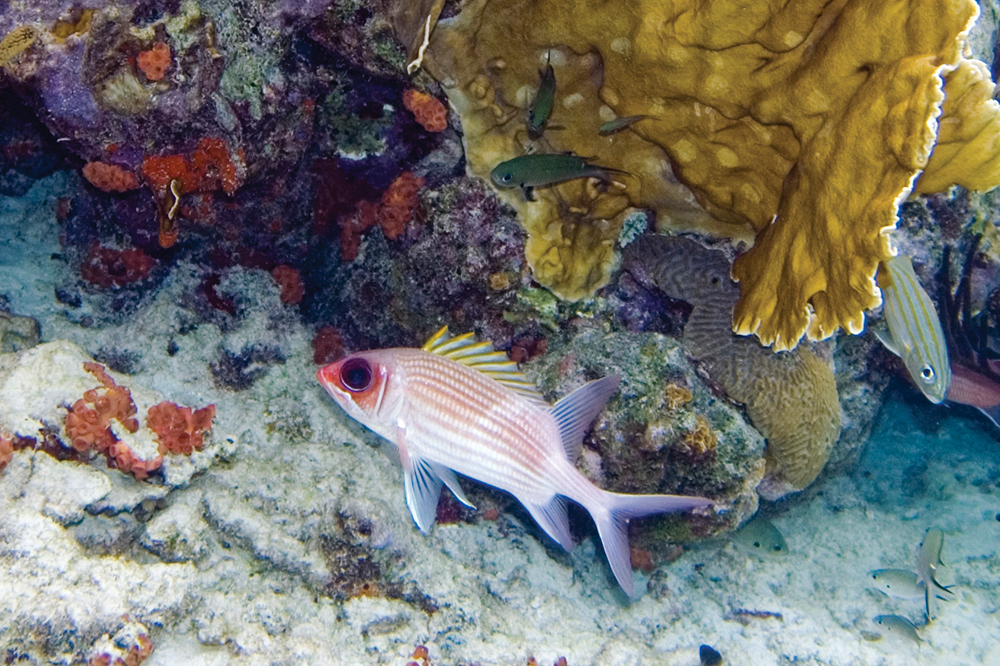 This species is found in the western Atlantic Ocean from North Carolina and Bermuda, south to Santos, Brazil including the Gulf of Mexico. They also live throughout the West Indies and Caribbean. In the eastern Atlantic, this species resides in the islands and tropical and subtropical waters along the African coast. They inhabit shallow reefs and offshore waters up to about 600 feet in depth, though they’re more commonly found around inshore reefs up to 100 feet. Although fairly non-aggressive, squirrelfish have a propensity to swallow most anything that will fit into their mouths. They hunt over sand and grass beds and feed primarily on meroplankton, such as crab and shrimp larvae, along with other small crustaceans and juvenile fishes. Put simply, if it walks, crawls, slithers, or swims, and has the probability to fit in their mouth, it might be squirrelfish food.

Upon first seeing a squirrelfish, the unusually large eye probably draws the most attention. They have these large eyes because they are primarily nocturnal, and larger eyes gather more available light. Though they can sometimes be seen during the day, they tend to be reclusive and rarely venture out from their overhangs or crevices. Juveniles generally congregate in schools, while adults tend to be more isolated within established territories. They communicate through ‘vocalizations.’ By contracting muscles that cause their swim bladder to vibrate, they can create a range of sounds, from quick cracks and pops to a constant rumble at frequencies from 75 to 85 Hz. Additionally, the swim bladder is not only responsible for vocalization, but also assists in hearing sounds produced by other squirrelfish. Because there is a tight association between the front end of the swim bladder and the ear, the swim bladder functions as a transducer (converting pressure to electrical signals), resulting in augmented hearing sensitivity.

Surprisingly, knowledge of the mating and spawning habits of squirrelfish is fairly low for a group found in such large numbers in shallow water. This is presumably due to their nocturnal nature. We know spawning occurs year-round in warm regions, but only during summer in colder waters of higher latitudes. Reproduction is believed to involve batch spawning, with each female releasing 50,000 to 250,000 eggs in open water. Juveniles are thin and silvery, and are rarely seen as they live out in pelagic waters for about 70 days before moving inshore and settling into suitable habitat, at about an inch long. Of the minimal information available, it appears females are routinely larger than males, though the difference is often 10mm or less. No other external differences are readily observable between the two sexes. Sexual maturity is estimated at 5.7 inches.

The squirrelfish is of low commercial importance, though it is frequently taken in artisanal fisheries off of Brazil and Venezuela. They are easily caught with handlines and gill nets, and can survive for days in traps or highly polluted waters. Though small in stature, they are considered an excellent food fish and are marketed fresh in some countries of South America. They are also a popular fish for public aquariums due to their availability, beautiful red coloration, distinctively large eyes, and hardiness. Though this species is captured in some small-scale fisheries, it is not considered a major threat to its global population and has thus been assessed as Least Concern by the IUCN.

Where I learned about squirrelfish, and you can too!