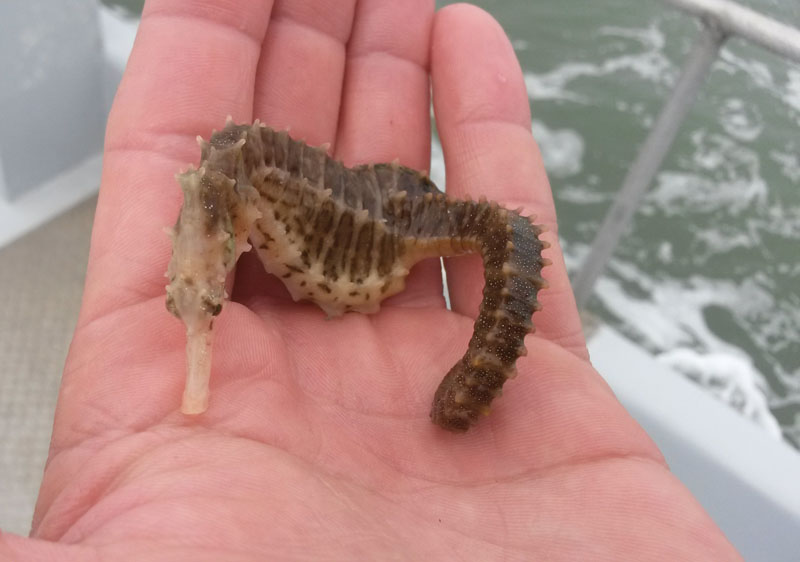 Everyone recognizes a seahorse. You probably even know that the males are the ones who give birth. It's one of those 'top weird facts' that biology teachers love to surprise their fresh-faced pupils with. Seahorses have been part of popular culture since Greco-Roman times. Many ancient cultures believe them to be immature Hippokampoi, the mythological half-fish, half-horse steeds of Poseidon (or Neptune, pick your god). Modern nomenclature appropriately repurposed the name for the seahorse genus, Hippocampus, meaning "horse sea monster" in Greek. The seahorse does sort of look like it was made from the mold of a tiny horse, except the artist ran out of clay before she got to the important parts, like the parts that move.

Adult seahorses have retained only a subset of the fins found in most other adult fishes the dorsal fin, a tiny anal fin, and two tiny pectoral fins (used for steering and stability). They swim using the propulsive force of the quickly waving dorsal fin. Well, swim might be too strong a term; it's more like aggressive floating. Imagine trying to propel yourself on a skateboard by waving a Whataburger menu back and forth really fast. The only way you're going to get anywhere on time is by grabbing onto a passing golf cart. Seahorses hitchhike too. They can travel long distances across the ocean by snagging a seat on the sargassum train (or other local seaweeds and debris). Their prehensile tails can wrap around seagrass stems, corals, sticks really any suitably coordinating natural or artificial object.

They are masters of camouflage. They have to be, since they lack the advantage of speed. They can change color and grow custom skin filaments to blend in with their surroundings. Instead of scales, seahorses have thin skin stretched over a series of bony plates. Some species also have spines, bony bumps, or skin filaments protruding from these bony rings. Many boast a group of spines on the top of the head, called the coronet because it looks like a crown, but it acts like a fingerprint. Every coronet is unique. Because seahorse wardrobes are so highly adaptable, the actual number of species is unclear. More than 120 species names have been proposed for seahorses over the past 200 years, but many have turned out to be synonyms for the same species. Many scientists who thought they'd found a new species were just renaming one that had already been described. There are usually between 40 and 60 species currently recognized, depending on whom you ask.

All seahorses are marine, generally living amongst seagrass beds, mangrove roots, and coral reefs, in shallow temperate and tropical waters. Some species live in colder waters, and some can also be found in estuaries, tolerating wide ranges in salinity. While seahorses appear to be very different from other fishes in the sea, they belong to the same class as all other bony fish, Actinopterygii. They do have a few differences, though. Their eyes are like a chameleon's. Each can move independently of the other and in all directions. They also have rods and cones in their eyes just like humans, meaning they can see in color. Seahorse sizes vary with species, ranging from the large Australian big-bellied seahorse (a foot or more in height) to the tiny pygmy seahorse (less than 2 cm high).

A common question is, if the males get pregnant, why aren't they called females? The reason is that, like all other male and female animals, it is the male seahorse that provides the sperm and the female seahorse that provides the eggs. The female deposits her eggs in the male's pouch, after which the male fertilizes them. The pouch acts like a womb, providing nutrients and oxygen to the developing animals, while removing wastes. Pregnancy lasts about two weeks to one month, the length decreasing with increasing temperature. The pouch's internal fluid changes slowly over the course of the pregnancy, from similar to body fluids to more like the surrounding seawater. This helps reduce the shock of birth for the offspring. The babies, called fry, are miniature adult seahorses, independent from birth, receiving no further parental care. Fry of most species measure between 7 and 12 mm. Most males give birth to around 100-200 babies at a time; however the range varies from as few as 5 to over 1500.

Most species of seahorse studied in the wild appear to be seasonally monogamous, remaining faithful to one partner for the duration of the breeding season and perhaps even over several seasons. Pair bonds are reinforced by a daily promenade, in which the female and male change color and dance together. This happens every morning before the pair separates for the rest of the day. The dances occur throughout the male pregnancy. Once the male has given birth and it is time to re-mate (sometimes only hours later), this dance is extended into a courtship ritual that varies between species, but usually includes color changes, head pointing, clicking sounds, and entwining of tails. The natural lifespans of seahorses are virtually unknown. Estimates primarily come from captive observations and range from about one year in the smallest species to an average of three to five years for the larger species.

Most seahorses are diurnal, actively feeding and lounging during the day. The seahorse is a first-order predator, a species that primarily consumes grazers. A single seahorse can eat more than 3,000 brine shrimp a day, which means that brine shrimp are really lousy at running away, because we know the seahorse isn't chasing them down! Seahorses will ingest anything small enough to fit in their mouth mostly small crustaceans, such as amphipods, but also fish fry and other invertebrates that comes within ambush range. They have no teeth. Instead, they suck their prey in through a tubular snout (a fused jaw). In fact, their family is named for this trait: family Syngnathidae, from the Greek syn, meaning fused, and gnathus, meaning jaws. Each prey strike is quite rapid, with the total feeding and recovery time lasting less than one second. Seahorses also have no stomach but pass their food through an inefficient digestive system that requires them to eat almost constantly.

Adult seahorses are presumed to have few predators due to excellent camouflage and unappetizing bony plates and spines. However, they have been found in the stomachs of large pelagic fishes such as tuna and dorado, and are also eaten by skates and rays, sea turtles, penguins, and other water birds. For some populations of seahorses, human beings are the greatest predator. Live seahorses are frequently collected for the aquarium trade, and demand is high for dried specimens, for use in traditional medicine. The global trade of these fishes is estimated at 20 million seahorses per year, involving at least 50 nations and territories. During the 1990s, seahorses ranked as the seventh most economically important fish group. The commercial demand for seahorses in many countries is met by the incidental bycatch of individuals in shrimp trawls. Overfishing and habitat degradation has left many species in distress. Fortunately, increased awareness and the start of seahorse farming are helping wild stocks recover in some areas.

Dwarf seahorses, as their name implies, are one of the smallest seahorse species in the world, barely reaching an inch or two in length, and are found almost exclusively in high-salinity grass flats. Because the dwarf seahorse is a habitat specialist, loss of seagrass directly affects the population. The BP oil spill contaminated much of the species' remaining range; oil pollution and dispersants used to break up oil are toxic both to seahorses and to seagrasses. In addition to oil pollution, the seahorse's seagrass habitat is threatened by declining water quality and damage from boat propellers and shrimp trawlers. The species was considered for protection under the Endangered Species Act in 2012, but listed as Data Deficient, meaning there have not been enough quantitative analyses examining the probability of extinction of this species to make a decision either way.

Dwarf seahorses live for only one year. The small size and specific body ring and dorsal ray counts distinguish it from the larger lined seahorse. Both have variable body color, tending to mimic whatever habitat they're hiding in.

Lined seahorses reach about 5 or 6 inches long and occur in bays and shallow parts of the Gulf in algal and coral reefs, floating sargassum clumps, mangroves, seagrasses, soft bottom areas, and around sponges. They tend to live in deeper waters than the dwarf seahorses, so you're much less likely to see them while just in the shallow seagrass beds. Occasionally you will find them without having to go diving in the deeper coastal waters. They probably spawn in the Gulf, the juveniles using the Gulf as a nursery area, whereas adults tend to use the bays. Their maximum age is unknown, but the average lifespan is only about four years.

"They said that when Amphitrite had unyoked the horses from Poseidon's rolling chariot we were to recompense our mother amply for what she had suffered all the long time she bore us in her womb."
The Argonauts listened with amazement to his tale. It was followed by the most astounding prodigy. A great horse came bounding out of the sea, a monstrous animal, with his golden mane waving in the air. He shook himself, tossing off the spray in showers. Then, fast as the wind, he galloped away.
Peleus was overjoyed and at once explained the portent to the others. "It is clear to me," he said, "that Poseidon's loving wife has just unyoked his team. As for our mother, I take her to be none but the ship herself. Argo carried us in her womb; we have often heard her groaning in her pain. Now, we will carry her. We will hoist her on our shoulders, and never resting, never tiring, carry her across the sandy waste in the track of the galloping horse. He will not disappear inland. I am sure that his hoof prints will lead us to some bay that overlooks the sea."
~Apollonius Rhodius, Argonautica

(The Hippokampoi was probably imagined reacquiring its fish tail when it returned to the sea.)

Where I learned about seahorses, and you can too!