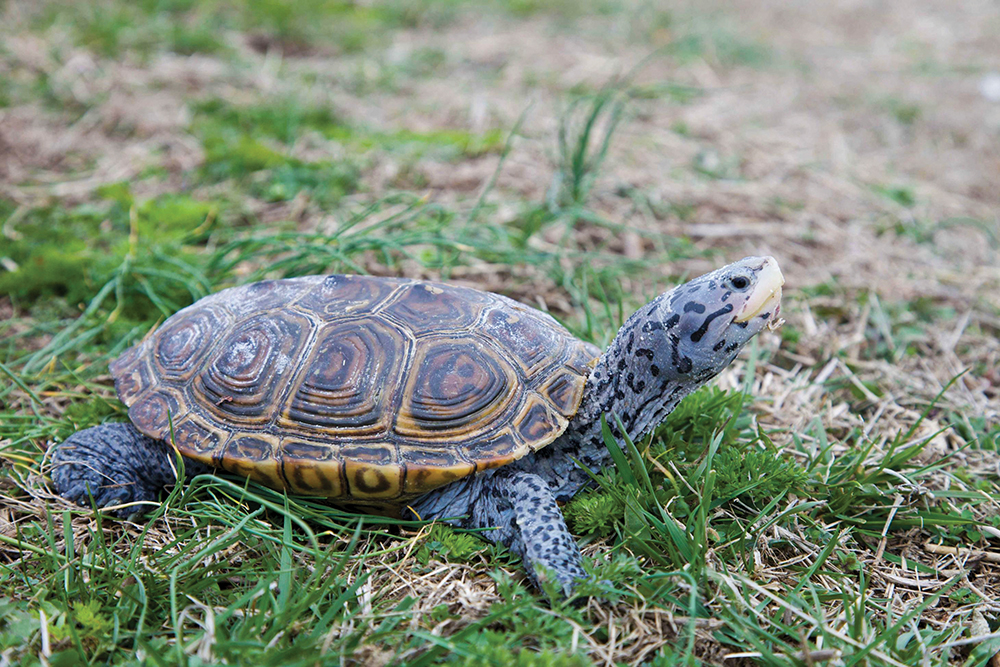 Diamondback terrapins are the only land turtles in North America that inhabit the brackish waters of estuaries, tidal creeks, and salt marshes. There are 7 subspecies, ranging in the very narrow strip of coastal habitats from as far north as Cape Cod, Massachusetts, to the southern tip of Florida and around the Gulf Coast to Texas. Most have specific, narrow geographic ranges. They tend to live in the same areas for most or all of their lives and do not make long distance migrations. The Texas subspecies, Malaclemys terrapin littoralis, occurs from western Louisiana to Oso Bay, just south of Corpus Christi. Preferring brackish or salt waters, they are often found in Spartina marshes that are flooded at high tide, along with tidal flats, lagoons, coastal marshes, mangrove swamps, and the inner edges of barrier beaches. It’s unclear why they don’t inhabit the upper reaches of rivers within their range, since they can tolerate fresh water. It is possible they are limited by the distribution of their prey.

Diamondbacks get their name from the concentric, diamond-shaped scutes (bony plates) on their shell. Overall pattern and coloration vary greatly between individuals, but tops of the shells range in color from light brown to gray or black, sometimes edged with yellow or orange. Undersides are usually yellow or orange with darker markings. Shell length ranges from 4-5.5 inches in males to 6-9 inches in females. Males weigh 11 oz on average, while females weigh around 18 oz. The largest females can weigh up to 35 oz. Individuals from warmer regions tend to be larger than those from cooler, more northern areas. Skin coloration is usually a pale gray, flecked with dark spots, blotches, and/or stripes. Each color pattern is unique and can be used to identify individuals. Some have a dark 'mustache' on the upper portion of the beak and/or sport a dark diamond on top of their heads. The shell is usually wider at the back than in the front, appearing wedge-shaped from above, and sports a knobby ridge in the center, running from head to tail – though older adults may lack this. Diamondbacks have strongly webbed hind feet (but not flippers like sea turtles) and strong jaws for crushing prey, such as snails. This is especially true of females, who have larger and more muscular jaws than males.

The name "terrapin" is derived from the Algonquian word torope. (Algonquian is a subfamily of American indigenous languages spoken across a vast area from the Atlantic seaboard to the Great Lakes and the Great Plains.) The name was originally used by early European settlers in North America to describe these brackish-water turtles that inhabited neither freshwater habitats nor the sea. It still has this meaning in American English, but in British English, other semi-aquatic turtle species, such as the red-eared slider, might also be called terrapins.

Though diamondbacks live in salty waters, they drink fresh water, and have evolved a few adaptations and behaviors to help with that. They have lachrymal salt glands around their eyes, which allow them to excrete the excess salt in their diets. During and after rains, they will drink the fresh water flowing on the surface of the salty water. Their diets consist of snails, clams, mussels, crabs, etc. and occasionally carrion, insects, worms, plants, and algae. Along the mid-coast, females frequently eat scorched mussels (Brachidontesexustus) and snails/crustaceans are more frequently eaten by males. Horn snails and fiddler crabs are common meals for both. Marsh periwinkles (Littoraria irrorata) are a favorite, and diamondbacks can sometimes eat enough of them to have ecosystem-level effects, partially because periwinkles can overgraze Spartina grasses (technically, the snails damage the grasses and then feed on the fungi that colonize the damaged sections). Predators of diamondback terrapins include raccoons, foxes, rats, skunks, birds (especially crows and gulls), and humans (less so in modern times, but this turtle used to be a delicacy!).

During the day, diamondbacks spend a lot of time basking in the sun. At night, they bury themselves in the mud, and occasionally, adults may hibernate like this over the winter. They are generally solitary, except during breeding season, which normally lasts from May through July. Female terrapins can mate with multiple males and store sperm for years, resulting in some clutches of eggs with more than one father. Mating occurs in the water, and females return to land to dig nests and lay eggs. Nesting occurs above the normal high tide line in sand dunes or scrub vegetation, during both day and night. Females often make several nesting forays before actually depositing eggs. They will quickly abandon a nest attempt if they are disturbed. Once settling on a nest spot, the female digs a triangular (more or less) hole about 6 inches deep and deposits 4 to 25 pinkish-white leathery eggs. Nest depth is crucial as shallower nests tend to be pillaged more readily by predators. As it is, the majority of nests (often over 90 percent) are raided within the first two days. Females can lay up to three clutches of eggs per year in the wild, and they have high nest site fidelity, meaning that they return to the same nesting areas each year. The eggs usually hatch in 60 to 90 days, depending on the temperature and the depth of the nest (higher temperatures result in faster development). Like most reptiles, terrapins have temperature-dependent sex determination, meaning that the sex of hatchlings is the result of incubation temperature. If temperatures are warmer (above 86°F), the nest will produce more females; if temperatures are cooler (less than 82°F), then the nest will produce more males. The one-inch hatchlings usually emerge from the nest in late fall or early winter, but some may overwinter in the nest after hatching until warmer spring weather arrives. Even being newly hatched, they are freeze tolerant, which facilitates overwintering on land. Unlike other turtle species, diamondback hatchlings do not seek open water, instead choosing to move into vegetated marshes. As they have a lower salt tolerance than adults, young terrapins use different habitats than do older individuals. The sexes mature at different rates, with males reaching sexual maturity in 3 or 4 years (at about 4 inches long) and females at 6 to 8 years (at about 5 or 6 inches long). Their maturity is more a factor of size than age, so southern populations may mature faster than northern ones. The Texas diamondback can live up to 50 years, though life expectancy in the wild is much shorter.

In the late 19th century, along the East Coast, diamondback terrapins were the main ingredient in a gourmet turtle soup craze. At the time, terrapins were so plentiful that fishermen considered them a nuisance because they sometimes were unable to haul in their fishing nets due to the weight. Huge numbers were harvested from marshes and marketed in cities, as much as 400,000 pounds per year. Because of the high demand, populations were locally extirpated near large cities. By the early 1900s, populations in the northern part of the range were severely depleted and the southern part was greatly reduced as well. During Prohibition, the fad fell off (as one of the main ingredients, sherry, was not available), and the Great Depression made the dish too expensive for many people to purchase. This offered the diamondback terrapin a bit of a reprieve, and populations gradually began to recover. Plus, the craze never really hit the same high in the Gulf of Mexico region as it did in the north, possibly because the southern populations were not considered as flavorful as the northern varieties.

Nowadays, the major threats are still humans, but not of the cuisine variety. Boat propellers, roadway mortality, loss of habitat from coastal development, collecting for aquarium trade, and abandoned crab traps are the worst culprits. Luckily, they’re also protected throughout their range, to varying degrees – closed seasons to harvest, size and bag limits, requiring terrapin excluder devices in traps, and some places have full protected status (no collection of wild specimens – Texas is one of these). Texas diamondback terrapins are currently listed as vulnerable to extinction on the IUCN Red List.

Where I learned about Texas diamondback terrapins, and you can too!