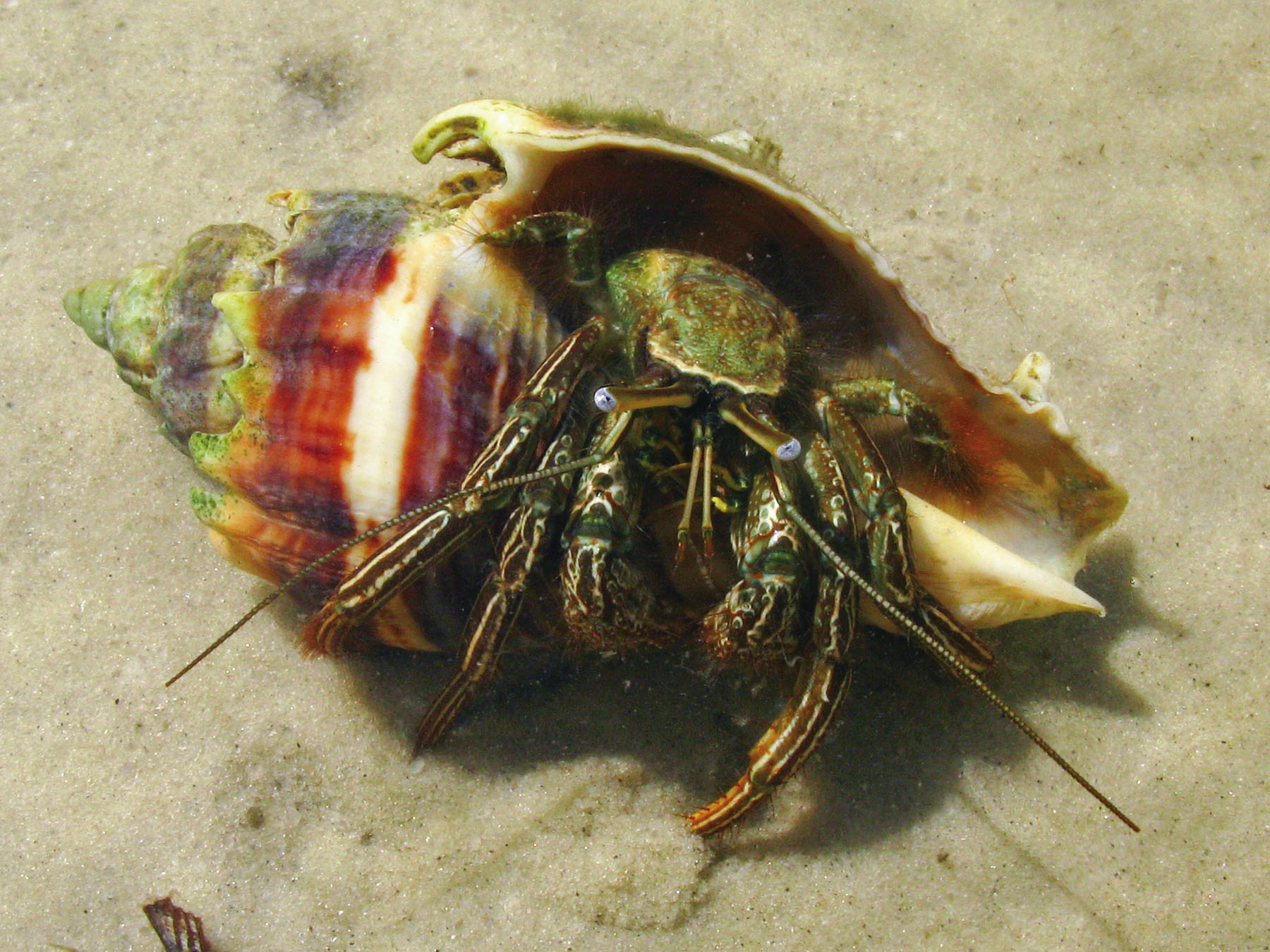 The thinstripe hermit crab. Photo by Alan Cressler.
If you enjoy beaches during the twilight hours, you've probably seen, at some point, little herds of snails walking across the sand.

Wait – walking snails? That can't be right... What you've actually stumbled across is nature's shell recycler, the hermit crab.

Hermit crabs belong to the subphylum Crustacea along with shrimps, lobsters, crayfish, etc. Members of this group are primarily aquatic, mostly marine, and share three defining features: 1) five pairs of non-leg appendages (two pair of antennae, one pair of mandibles, and two pair of accessory feeding appendages); 2) segmented bodies covered by a tough, protective, semi-transparent substance (chitin); and 3) biramous appendages (divided into two parts). These are the basics. A systematic rundown of Crustacea would be large and complex, so allow me to skirt around a full discussion of that just now.

Then hermit crabs get filtered down through the class Malacostraca (home to three-fourths of all described crustaceans), the superorder Eucarida (containing many of the larger malacostracans), the order Decapoda ("ten feet"), and finally landing in the infraorder Anomura (soft lower bodies enclosed in discarded shells, for the most part). While hermits do have the requisite ten legs (as members of Decapoda), only six generally show. These front six are the walking/eating/blocking legs. The four back legs that appear to be missing have evolved into grippers that hold the crab inside the shell. Their hold is so strong that you would tear the crab in half before you could extract it. The front pair of legs ends in claws, or pinchers. The left front pincher is larger and used primarily for defense. When the hermit retreats inside its shell, it uses this pincher to seal off the shell’s opening. The right front pincher is smaller and used mostly for eating.

Despite the name, hermit crabs are not true crabs. Rather, they are an intermediate form, having a soft, shrimp-like, spirally curved, naturally flexible abdomen, quite unlike the hard, calcified abdomens seen in related crustaceans. The tip of this vulnerable tail is adapted to clasp strongly onto the inner axis of snail shells (double the gripping power!).

Shell-bearing hermits are a very successful group, consisting of over 700 species. They are dependent upon a shell resource which they cannot manufacture and which they usually cannot obtain from the manufacturer on demand. In areas where quality shells are scarce, shell fighting may commence, and while snail shells are highly favored, clam shells or bits of driftwood have been used in a pinch. Even pieces of bamboo or coconut shell can suffice. A few species forego the mobile home option and inhabit sessile structures left by polychaete worms, corals, sponges, etc. Most species are aquatic and live in varying depths of salt water, though tropical areas host some terrestrial species (but even those need access to water for reproduction). Marine crabs breathe, like fish, through gills. Land hermits have a modified gill mechanism that absorbs oxygen from the humidity in the air.

Hermit crabs begin life as eggs. Adult males find females by the scents females give off when they are ready to mate. After the male finds a mate, he might stroke and tap his partner's claws with his own claws. In some species, the male will take hold of the female's shell and carry her around for a while before mating. Females carry their eggs on the left side of their bodies, inside the shell, and may have a thousand at a time. The eggs hatch as microscopic larvae called zoeae. Through molting, they'll progress through a couple of larval stages before emerging as juveniles that actually resemble hermit crabs, albeit miniature ones. From the moment two hermit crabs mate to the time a juvenile claims its first shell, about four months pass. Homeownership comes a lot quicker for a hermit crab than it does for us. In the pet trade, hermit crabs are often regarded as "throw away pets" that only live a few months, but some species can live longer than thirty years and many often reach ten.

Primarily scavengers, hermits will eat anything organic from fish feces to seaweeds and everything in between. They are opportunistic though, and larger crabs are not against a bit of fishing. Their small size makes them popular on the menus of natural predators around the world, including sharks, fish, cuttlefish, squid, octopuses, and even other hermits. To combat this wide array of predators, some species pick up hitchhikers, such as sea anemones or slipper shells. Some hitchhikers are useful mostly for camouflage. Members of the Pagurus genus are frequently found in shells encrusted with colonies of hydroids (tiny stinging jellies, best described as hundreds of inverted jellyfish; it is the polyp stage of a particular organism's life cycle). These colonies apparently don't harm Pagurus, either because Pagurus inhibits the firing of the nematocysts or because it is immune to the sting. Either way, no one else is going to tangle with that shell, and when the hermit crab changes shells, it will often take its hitchhikers with it.

Traveling with a hermit crab has certain advantages; the shell is usually kept free of sediment and is well aerated, and food is generally plentiful. Of course there are also disadvantages; the shell may be abandoned by the crab (which is bad news if you're permanently attached!), or handled roughly, or carried into unfavorable environments, such as up onto the beach where many hitchhikers aren't built to survive. Plus, even uninhabited shells are subject to attack. Empty shell attack (mistaken predation) is common among crabs on rocky shores.

Hermit crabs have been using second-hand shells since the Jurassic. Originally, ammonite shells were prime real estate, but when ammonites took a downward spiral, early hermits were forced to adapt. Gastropod shells were plentiful, spiraled, and created considerably less resistance when dragged across the sea floor; hermit crabs had found their new manufacturer. From that time onwards, hermits exponentially extended the ecological lifespan of empty, spirally coiled shells, thereby dramatically increasing the amount of shelled prey. This abundance led to a new class of predators specializing in shell penetration, which in turn, prompted a marked increase among gastropods in shell sturdiness. To describe these particular chains of evolutionary adaptations, the term "Mesozoic marine revolution" has been proposed.

But back to the present.

In general, and despite their namesake, hermit crabs are social creatures. In the wild, they might be found in colonies of a hundred or more. Of course, most social animals get together for protection or to mate or hunt; hermit crabs socialize to steal each other's houses. Hermits are always on the lookout for bigger and better shells. Living in a borrowed shell has its advantages: hermits are freed from expending the biological energy of growing and maintaining their own hard carapace, though this does limit the crabs to habitats with good housing markets. When upgrades are scarce, hermits do fight and occasionally oust their neighbors, and typically it's just a couple of crabs duking it out. However, sometimes a shell switching situation occurs that benefits a whole hermitage. Sometimes, if a hermit crab discovers a shell that is too large, it might not abandon the shell immediately. Instead, it waits around for another crab try on the new shell. If the second crab doesn't fit into the new shell either, it hangs around, too. When three or more crabs congregate, they quickly attract several others eager to trade up. They typically form a conga line, largest to smallest, each holding on to the crab in front of it, and once a hermit of just the right size for the new shell shows up and moves in, everyone in line scrambles into the shell of the crab in front of it. This group trade up is called a synchronous vacancy chain.

If you ever listened to two hermits fighting over a shell, you would realize they actually make noise! Not just shells scraping on sand, or some other auditory byproduct, but actual sound from inside. Now, inside what? Scientists aren't quite sure. The noise, referred to as stridulations, sounds like a cross between a cricket chirping, a frog croaking, and rusty door hinge. It's unclear exactly how they're making this sound. Some think there are two hard plates inside the crab that rub together. Some think it's the crab's body rubbing against the inside of its shell. If you held a stridulating crab, you would be able to feel the vibrations. Regardless of how it's made, it's almost always a sign of aggravation.

There are several hermit crab species in Texas waters, but the three most common in the bays are Pagurus longicarpus (the long-armed hermit crab), Pagurus pollicaris (the thumb-clawed hermit crab), and Clibanarius vittatus (the thinstripe hermit crab). The latter is most abundant, especially during the summer in intertidal zones. In winter, it migrates into the shallow sub-tidal zone and buries itself in the mud. Both species of Pagurus are more common nearshore during the winter, when they apparently move into shallow water to breed. C. vittatus is easily recognizable by a dark green or brown body with conspicuous gray or white stripes, most noticeable on the legs. The long-armed hermit has longer and more slender claws than does the thumb-clawed hermit crab, whose short, flat claws are ideal for plugging the aperture of its shell when bothered. Body color in both is highly variable, ranging from off-white to greenish-gray to brown. These three species inhabit the bay shores and frequently encounter one another. A fourth common species, Isocheles wurdemanni (the surf hermit), lives sub-tidally along more exposed beaches, where it is nearly isolated from the other species. It is a small hermit, also distinguished by short, stubby claws.

Currently, none of our Texas hermits are considered threatened. In general, marine hermits are pretty well off, though imports for the aquarium trade are significant. If you visit tide pools where hermit crabs are abundant, leave the empty shells; taking them drives up the rent.

Where I learned about hermit crabs, and you can, too!

The Oldest In Situ Hermit Crab from the Lower Cretaceous of Speeton, UK
By Rene H.B. Fraaije

Hermit Crabs, Use in the Marine Aquarium Hobby
www.wetwebmedia.com/marine/inverts/arthropoda/crabs/hermitcrabs.htm