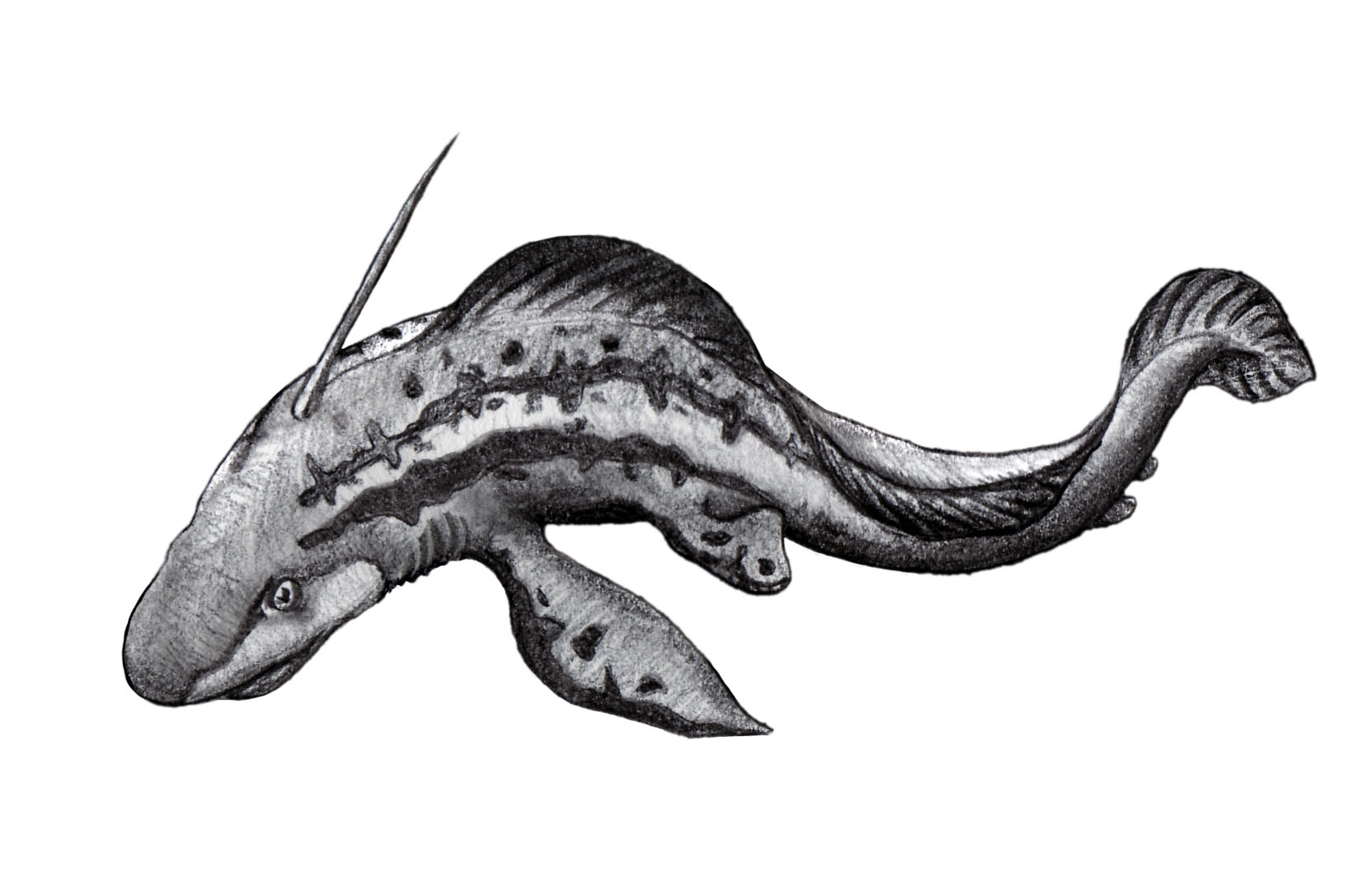 Reconstruction of Xenacanthus, an eel-shaped shark that haunted freshwater habitats in what is now Europe during the early Permian (about 280 million years ago). Could Antarctilamna, which lived about 100 million years earlier. have looked like this? A 1995 paper by John Long and Gavin Young proposed that Antarctilamna was a 'stem-group xenacanth', evolutionarily rather removed from Xenacanthus and other 'crown-group xenacanths'. Time and further specimens may eventually support or refute this idea. Photo copywrite GregTatum.com

Merriam-Webster defines a shark as "any of numerous, mostly marine cartilaginous fishes of medium to large size that have a fusiform body, lateral branchial clefts, and a tough, usually dull gray skin roughened by minute tubercles; a typically active predator sometimes dangerous to humans."

Well, that's a start, in the most general sense. There are a few key characteristics that define sharks: replaceable teeth, tooth-like scales, multiple gill slits, a cartilaginous skeleton, paired fins, jaws, internal fertilization, and lack of a swim bladder. The most infamous of these characteristics is, of course, the teeth. What makes shark teeth unique from the teeth of other fish is that they are continuously produced and shed, with older teeth rotating forward in the mouth to allow new teeth in the back, like a dental assembly line. A single shark may shed six-thousand teeth a year! The second shark-defining characteristic, which is also rather well-known, is their scales. Thousands of tiny, tooth-like scales give shark skin a sandpaper-like texture when rubbed in one direction, but a smooth feel when rubbed in the opposite direction. These scales are called dermal denticles, literally "tiny skin teeth." (1)

Another familiar feature of sharks is their multiple gill slits. Most shark species have five pairs of slits, but some have six or seven. Sharks also have a skeleton made of cartilage, rather than bone. Parts of the skeleton that require more strength, such as the jaws and backbone, have calcified crystals for reinforcement. Like most fishes, sharks sport two sets of paired fins which correspond to arms and legs in humans. However, unlike those of bony fish, shark fins draw support from "soft, unsegmented rays" instead of bone. (1)

Possibly less familiar are these last few characteristics: the upper jaw of a shark is separate from the cranium (the part of the skull enclosing the brain), allowing both jaws to partially protrude from the head, which is most apparent when a shark grabs its prey. All existing sharks reproduce via internal fertilization, as opposed to releasing eggs and sperm into the same area of water. Additionally, about seventy percent of today's sharks give birth to live pups instead of laying eggs. Lastly, sharks have no swim bladder, an organ most bony fish use to control their buoyancy. Instead, sharks rely on an enormous, oil-filled liver to lighten their body load (a liver so huge, in fact, that it leaves little space for other organs). (1)

All sharks share these characteristics, not only with each other, but with the entire class of cartilaginous fish: sawfishes, guitarfishes, rays, skates, chimeras, etc. The main difference between the cartilaginous class of fish, Chondrichtyes, and the bony class is, you guessed it, bones. (1)

Sharks have two more senses than humans do: pressure sensors and common sense... I mean, electrosense. They also share the five we have. Vision: in an environment where long distance sight is hindered, vision means the difference between eating and watching lunch swim away, and sharks have excellent vision in the semi-dark, even better than cats. Scent: sharks have 10,000 times the sense of smell we do and can locate prey nearly a mile away using only this sense (depending on the concentration of prey and the currents carrying the smell). Taste: sharks only eat what tastes good to their well-developed sense, which is why they sometimes take only one bite of something. Hearing: sound travels much faster under water than on land, and sharks react most to lower frequencies, which travel farther than high ones. Touch: shark skin is very attuned to pressure and temperature which allows sharks to feel contact with other creatures or objects, water currents, and temperature changes, rather like an amplified version of our sense of touch. Pressure sensors: these may be connected to one of more of the aforementioned senses; some sensors in the skin conduct shock waves while others, called pit organs, may register physical stimuli, such as water current changes. Finally, electrosense: this is a shark's ability to detect the electrical fields of other living creatures. Only sharks and rays have this ability, and there's no hiding from this sharky sense. (2)

Now, you have a basic knowledge of what sharks are today, but to better understand the roughly 1,100 living species, you should also know something about where they came from. (1) Many people believe that sharks have remained unchanged for 300 million years, a static entity in geologic time, perfect in it's initial creation. In actuality, ancient sharks differed greatly from modern sharks. Some families of sharks died out completely, and half of the existing families of sharks have only been around half that long. Of course, despite the differences, ancient sharks still showcase the same basic structural characteristics mentioned earlier (that is, after all, what makes them sharks), but there are several variations on this elemental shark theme.

Since cartilage is notorious for leaving very few fossils, shark paleontology relies heavily on fossilized teeth and scales. If a tooth is well-preserved, the information gathered from it is accurate enough to identify basic groups, such as a genus, family, or order, and to correctly place the shark in an evolutionary time line. (3) However, besides the natural erosion that can happen to fossils, the teeth of any given species are not necessarily uniform. They can vary with the age of the shark, location in the jaw, reproductive state, sex, geographic population, individual peculiarities, and malformities, making fossil teeth a veritable jigsaw puzzle. (3)

The earliest fossil shark teeth are about 400 million years old and were found in modern-day Europe. These teeth are tiny (three-four millimeters in length) and two-pronged. They belonged to Leonodus. Based on the double-cusped teeth, Leonodus may be an ancient representative of a family of almost-exclusively freshwater sharks known as xenacanths. However, the similar teeth may also be simply an adaptation resulting from feeding on similar prey rather than a family trait. But with only teeth to go on Leonodus, like most of the earliest sharks, is a name without a face. (1) (Insert drawing of Leonodus tooth.)

The earliest partially whole fossilized shark remains are about 380 million years old, found in Antarctica. Other impressions of various body parts from this species have been found in Australia and Saudi Arabia. This sixteen-inch shark was named Antarctilamna and may also have belonged to the xenacanth family. As a xenacanth, Antarctilamna would have had a long, backward-pointing fin spine just behind the head (xenacanth means "strange spine"), two-pronged teeth, an eel-like body, a long dorsal fin running along most of the back, and a symmetrical, tapering tail. However, Antarctilamna's fin spines are "cylindrical and ornamented with unique rows of small, thorn-like denticles," which is more reminiscent of another group of ancient sharks, the ctenacanths (ctenacanth meaning "comb spine"). Though it's not wholly settled whether Antarctilamna was a xenacanth with ctenacanth-like fin spines, a ctenacanth with xenacanth-like teeth, or something else entirely, there is no doubt that Antarctilamna was a "full-fledged, card-carrying shark." (1) (Insert drawing of a xenacanth.)

The first well-preserved, whole shark fossil dates back about 350 million years. Cladoselache was found completely intact, including muscle fibers and kidneys, in Lake Erie. At about four feet long, Cladoselache was a mixture of ancient and modern shark characteristics. Like many ancient sharks, Cladoselache had a short, round snout, a mouth located at the front of the head (as opposed to the underslung mouths of modern sharks), long jaws attached to the cranium, multi-cusped teeth, and a prominent spine in front of each dorsal fin. However, Cladoselache also had a longitudinal ridge preceding the tail and a crescent-shaped, symmetrical tail fin. These two characteristics resemble the modern Lamnidae family, a group including white sharks, mackerel sharks, and makos. (1)

In addition to being a mixture of ancient and modern features, this ambiguous shark had one trait in common with neither. Except for a few areas of small, multi-cusped scales along its fins, mouth, and eyes, Cladoselache's skin was missing the tooth-like scales that partially characterize sharks. Essentially, Cladoselache swam the oceans naked. Though Cladoselache was a bit of an oddball, like Antarctilamna, it's still a member of the shark family tree. (1)

As illustrated by Antarctilamna and Cladoselache, ancient and modern sharks, while following the basic shark layout, had several distinct traits. Early sharks' forward-located upper jaws were attached to the cranium at both the front and back. Modern shark upper jaws are attached at the back only. The brain and scent organs of ancient sharks were relatively small, suggesting at the least, a less well-developed sense of smell than modern sharks. Ancient shark teeth were smooth-edged and multi-cusped. While some modern sharks still sport this tooth type, the younger species have serrated, single-cusped teeth. The pectoral fins of early sharks were triangular, rigid, and broad-based, but most modern sharks have scythe-shaped, flexible pectorals with narrow bases. Lastly, ancient shark backbones contained many simple, uncalcified vertebrae, while modern shark backbones are composed of fewer, complexly sculpted vertebrae. Different seats, more radio buttons, higher gas mileage... Thus, sharks are like automobiles: new models come and go, but a cadillac's a cadillac from the very first to the very last. (1)

At least 425 million years old, sharks rank as one of the oldest surviving vertebrate groups, but as you now know, the popular belief of sharks as creatures who sidestepped evolution to arrive in our time fundamentally unchanged is pure poppycock. Over a time period "three times as long as the reign of the dinosaurs, sharks flirted with an astonishing variety of forms and lifestyles." The sharks living today are the "stripped down, fine-tuned result of hundreds of millions of years of evolutionary tinkering." (1)