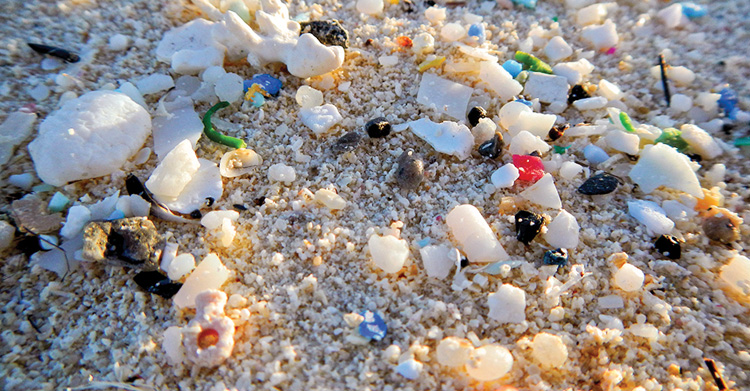 Microplastics on the Northwestern Hawaiian Islands. Photo by National Oceanic and Atmospheric Administration.

The invention of plastic in 1907 changed our lives forever – for better and for worse. Plastic is one of the most versatile materials ever produced and revolutionized everyday life. Cheap, durable, lightweight, and malleable, plastics have practically unlimited numbers of possible applications. The term ‘plastic’ is comprehensive for synthetic polymers, most often created from oil or gas, but sometimes manufactured from coal, natural gasses, cellulose, or latex from trees. The molecular backbone of a plastic is typically a compound of hydrogen and carbon. Other chemicals are also infused to enhance desirable properties, such as plasticizers, which are added to improve the malleability of certain polymers. It seems like almost everything surrounding us is made of plastic, and it’s hard to imagine a world without.

However, the plastic revolution came at a cost. The pollution from plastics is as prevalent as the useful plastic items in our lives. We see it every day – in our yards, in the ditches, in parks, on the beach… But what about the discarded plastics we don’t see all the time? Plastic pollution in our marine environment is taking place on a staggering scale. Several million tons of plastic waste flows into the ocean each year, and now there’s a relatively new threat: microplastics. Most people are aware and have seen the impacts of litter pollution on beaches. It’s a familiar sight to many on the coast, and plastic-covered beach scenes are often used to promote conservation. What you don’t see – literally – is plastic in the form of very small particles, many of which are not visible to the naked eye. According to criteria developed by the National Oceanic and Atmospheric Administration (NOAA), microplastics are microscopic particles less than 5 millimeters in length. Though many studies use this definition, there is no accepted standard measurement, as yet, to define microplastics, making some study results difficult to compare. However, it is clear this pervasive contamination of oceans by microplastics is becoming a major concern. Given the magnitude and uniqueness of this global ocean contamination, some have described the world’s ocean as a plastic soup. Future historians may come to call our era, the Plasticene.

A History of Microplastics

Microplastics have been accumulating in the oceans for at least over the last four decades. In the early 1970s, the first reports of plastic litter in the oceans drew minimal attention from the scientific community, but after a few decades of data accumulation on the ecological consequences of such debris, the topic began to receive an increasing amount of interest. Most studies focused on the entanglement of marine mammals, sea turtles, and other species in net fragments and on ghost fishing by derelict gear on the sea floor. Ingestion of plastics by birds and turtles is extensively documented worldwide, with verified accounts of species such as the black-footed albatross feeding plastic granules to its chicks. Reports of the unexpectedly high incidence of plastic debris in the North Pacific Gyre, now known as the Great Pacific Garbage Patch, established the topic as a high-priority research area in marine biology.

Several broad classes of plastics are used in packaging: polyethylene, polypropylene, polystyrene, polyethylene terephthalate, and polyvinyl chloride. They are high-volume usage plastics and consequently, these in particular have high likelihoods of ending up in the ocean environment. However, only about half of these plastics float; the rest sink. So, estimating the amount of plastics in the oceans through surface debris collection seriously underestimates the total extent. Even though plastic is the primary ingredient of marine debris, microplastics are under-researched due to difficulties in assessing their distribution and abundance.

Microplastics tend to accumulate close to cities or regions of relatively high human use, as you would expect. However, there are also detectable levels present in very remote areas, such as Arctic Sea ice, a mountain lake in Mongolia, and deep-sea sediments. Because physical factors like wind, salinity, temperature, precipitation, etc. can influence distribution, the density of human populations alone can’t be used to predict the abundance of microplastics within a region. Nor can the amount of litter on shorelines. One study observed relatively consistent distribution of plastic litter across a 1600-foot stretch of North Sea shoreline and found that microplastic accumulation did not correspond significantly with the visible plastic debris along the shore.

In general, microplastics fall into one of two categories. Primary microplastics are produced intentionally, like microbeads or plastic production pellets. Secondary microplastics are small pieces degraded from larger plastics. Globally, primary microplastics have been added to a variety of personal care products – including toothpastes, shampoos, facial cleansers and moisturizers, cosmetics, and shaving products – for reasons such as emulsion stabilization (preventing oil and water from separating), viscosity regulation (adjusting a fluid’s resistance to flow), and skin conditioning. Microplastics are also added to industrial cleaning products, such as scrubbers for removal of rust or paint, and pellets are used in production of plastic consumer goods. Some surprising yet common sources of microplastics include synthetic textiles, tires, road markings, and marine coatings. Washing synthetic textiles creates microplastics through abrasion and shedding of fibers. Those fibers are then discharged in sewage water and potentially end up in the ocean. Significant amounts of these textile fibers have been observed in many sampling studies, both in open water and marine sediments. They are typically polyester, polyethylene, acrylic, or elastane. Tires erode during normal use as they abrade against pavement, concrete, etc. The particles are formed from the outer parts of the tire and consist of a matrix of synthetic polymers, mixed with natural rubber (and many other additives). Tire “dust” can be spread by the wind or washed off the road by rain. Road markings are applied during the development of road infrastructure and its maintenance. We’ve all been on that new road still missing the center stripe. These markings can be made of paint, thermoplastic, preformed polymer tape, and/or epoxy and are mostly reduced to microplastics from tire abrasion. Marine coatings, like anticorrosive or antifouling paint, are applied to all parts of vessels for protection. Several types of plastics are used for these coatings, including polyurethane, epoxy, vinyl, and lacquers. Microplastics escape from boats during building, maintenance/repair, and just regular use. These are all accidental releases of microplastics, ones most people never think of, much less stop to consider. Personal care products are probably the only intentional release of microplastics into wastewater streams. Yes, you did purposefully wash that toothpaste down the sink. Some of these products contain as much plastic in the products themselves as in their plastic packaging. There can be several thousand microbeads in one gram of facewash!

Littering and mismanaged wastes are often labeled as the main source of plastic pollution in the ocean. However, primary microplastics are sneaking up from behind to become another major source of concern. The global release of just primary microplastics corresponds to an average of one plastic grocery bag per person per week thrown into the world ocean. This number varies widely across regions, going from 22 equivalent grocery bags per person per year in Africa and the Middle East to 150 bags per person per year in North America.

For common polymers and nylons exposed to the marine environment, it is primarily the UV-B radiation in sunlight that initiates photodegradation. Once initiated, the degradation can also proceed thermo-oxidatively for some time without the need for further exposure to UV radiation, as long as oxygen is available to the system. Plastics can degrade into micro-sized, or potentially even nano-sized, particles. Even these fragments can then undergo further degradation where carbon in the matrix is converted to carbon dioxide and incorporated into biomass. However, reduction in particle size is no guarantee of subsequent biodegradability of fragments. High molecular weight plastics used in common applications do not biodegrade at a discernible rate since microbial species that can metabolize polymers are rare in nature. This is particularly true of the marine environment, with the exception of biopolymers such as cellulose and chitin. The time required to completely mineralize plastics is estimated to be on the order of hundreds to thousands of years. In other words, despite what you read on the web, don’t count on Ideonella sakaiensis to clean up your mess.

Other types of degradation processes are significantly slower than photodegradation. Hydrolysis isn’t usually a significant mechanism in seawater. Degradation by UV radiation is a very efficient mechanism in plastics exposed in air or lying on a beach surface, but when the same plastic is exposed to sunlight while floating in seawater, degradation is severely impeded. The lessening of degradation in plastics exposed to the elements while floating in seawater is primarily the result of the relatively lower temperatures and lower oxygen concentration. Knowing that microparticles are commonly generated on beaches highlights the importance of beach cleaning as an effective mitigation strategy. The removal of larger pieces of plastic debris from beaches before they degrade much can considerably reduce the microplastics that end up in the ocean. Beach cleanup, therefore, can have an ecological benefit far beyond improving beach aesthetics.

Microplastics lighter than seawater will float and disperse widely across the oceans. Ocean gyres are noteworthy areas of debris accumulation, the rotational currents capturing high concentrations of plastics. Microplastics denser than seawater accumulate on the ocean floor, which means a significant amount of microplastics make their way to the deep sea. Turbulence and storm activity can cause resuspension and redistribution of high-density microplastics throughout the water column, so density of the parent material alone does not dictate the location of the particle within the water column. The colonization of organisms on a polymer will also influence the ability of a light plastic material to float. Called biofouling, this colonization increases the weight of the plastic, sometimes enough to cause the plastic to sink to pelagic or benthic zones.

Deep-sea sediments have only been sampled a few times, so data is fairly preliminary at this point. In 2012, sediments and coral were collected from deep-sea locations at depths up to two miles in the Northeast Atlantic Ocean, Mediterranean Sea, and Southwest Indian Ocean. Microplastics were identified in all samples, at an average abundance of 13.4 pieces per 1.7 ounces of sediment. Given the extent of deep-sea regions and how little we’ve explored them thus far, these sediments might hold one piece of the puzzle of the “missing plastics” – unaccounted for tons of microplastic waste that we haven’t found but that should be in the world's oceans.

Only a few studies have undertaken quantifying microplastics in surface waters of freshwater lakes and rivers. In 2012, surface waters in the heavily urbanized region of the Great Lakes were sampled, as these represent a potential source of microplastics to the St. Lawrence River and, ultimately, the North Atlantic. The average abundance in Lake Superior, Lake Huron, and Lake Erie was 68,800 pieces per square mile, and the microplastics sampled matched the shape, size, color, and elemental composition of polyethylene beads used in two national brands of facial cleanser.

Tune in next month for the exciting... er, educational conclusion!