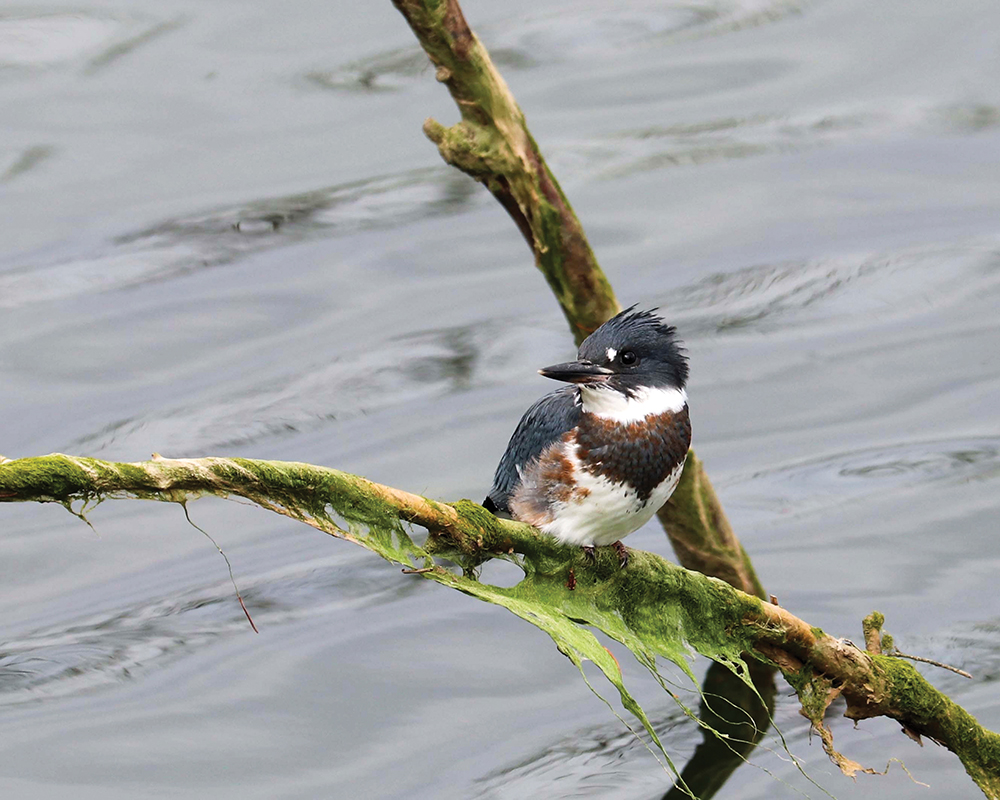 Photo by JudaM from Pixabay.

South Texas has three coexisting kingfishers in the winter, when the medium-sized belted kingfisher arrives to join the small green and large ringed kingfishers.

Found throughout most of North America at one season or another, belted kingfishers are the only member of their family to be seen north of South Texas. In winter, they migrate to areas where the water doesn’t freeze, so they have continual access to their aquatic food sources. They can be found in almost any waterside habitat – the edges of small streams and ponds, large rivers and lakes, marshes, saltwater estuaries, mangrove swamps, brackish lagoons, and rocky coastlines; they seem to require only clear water for fishing. This medium-sized bird has a bushy crest, white collar, and a large, black, dagger-like bill. They are blue-gray above and white below, with fine, white spotting on the wings and tail. Males have one blue band across the white breast, while females have a blue and chestnut band. Their gray legs are short, and their tails are medium length and square-tipped. Among the nearly 100 species of kingfishers, the sexes often look alike. The belted is one of the few in which the female is more brightly colored than the male.

Belted kings live mostly on a diet of small fish, usually those less than 4-5" long, though they’ll also eat crayfish, frogs, tadpoles, aquatic insects, lizards, young birds, small mammals, and even berries. Clear water and an unobstructed view of prey are essential for successful hunting. They typically search for prey from a perch, though they may hover above the water instead. When the kingfisher spots something tasty near the surface, it dives with closed eyes, and grabs the prey in its bill with a pincer motion. Returning with its prize, it pounds the prey against a perch before swallowing it head-first. They will also dive into the water to avoid being eaten by hawks. As nestlings, belted kingfishers have acidic stomachs that help them digest bones, fish scales, and arthropod shells. But by the time they leave the nest, their stomach chemistry apparently changes, and they begin regurgitating pellets (which accumulate on the ground around fishing and roosting perches). By studying these pellets, some information on seasonal diets can be determined without collecting birds or directly observing their foraging behavior.

This kingfisher is often first noticed by its wild rattling call that sounds like a heavy fishing reel. They are almost always solitary, except when they pair up during the breeding season. Males (and occasionally females) establish territories, which usually conform to the shape of the stream or shoreline. If one suspects an intruder in its territory, it may land on a perch and heave its body up and down with its crest elevated, or fly back and forth along the water, rattling noisily until the intruder leaves. If threatened, it may scream and spread its wings, while raising the patch of white feathers next to each eye.

Wintering birds are present in Texas from late August to early May. During the breeding season (late March to mid-July), belted kingfishers are found throughout most of North America at elevations up to 9,000 feet. In Texas, they breed primarily in the Pineywoods, Post Oak Savannah and Blackland Prairies, Rolling Plains, and Edwards Plateau regions, where they are uncommon summer residents. Belted kingfishers are monogamous within each breeding season but form new pairs every year. In courtship, the male brings fish to the female and feeds her. They nest in burrows that they dig into soft earthen banks, usually adjacent to or directly over water. Both sexes participate in excavating a burrow and typically choose a section of bank devoid of vegetation or lined only with herbaceous vegetation rather than trees (where roots might impede excavation). Excavation usually takes 3 to 7 days to finish, but may sometimes take up to three weeks. The completed burrow extends 3 to 6 feet into the bank, sloping upward so that rainwater won’t collect inside, and ends in an unlined chamber about 10 inches in diameter and 6 inches high. Throughout the breeding season, a layer of undigested fish bones, fish scales, and arthropod exoskeletons may accumulate. They sometimes nest among bank swallows, and even occasionally share burrows (the swallows dig out small rooms along the tunnel walls), but kingfishers usually inadvertently drive the swallows away just by their constant comings and goings during excavation. Five to eight eggs are laid in the nesting chamber. The female incubates at night; male incubates during the day. Young depart from nest 27 to 29 days after hatching and are fed by parents for about another 3 weeks.

People used to shoot and trap kingfishers, especially near fish hatcheries and along trout streams (to prevent them from eating fish), but hunting has since been outlawed through migratory bird laws. Compared to other fish-eating birds, belted kings seem to be relatively unaffected by environmental contaminants, possibly because their small prey items accumulate only low levels of toxins, due to their low trophic levels. Though they are still common and widespread, from 1966-2014 their populations declined by an estimated 1.6 percent per year according to the North American Breeding Bird Survey, resulting in a cumulative decline of 53 percent. Their populations are limited by the number of earthen banks available for nesting, so some populations have grown and spread thanks to human-made sand and gravel pits. However, they are sensitive to disturbances, and may abandon territories when people begin frequenting the area.

Join us next month to meet the other 2 kings!