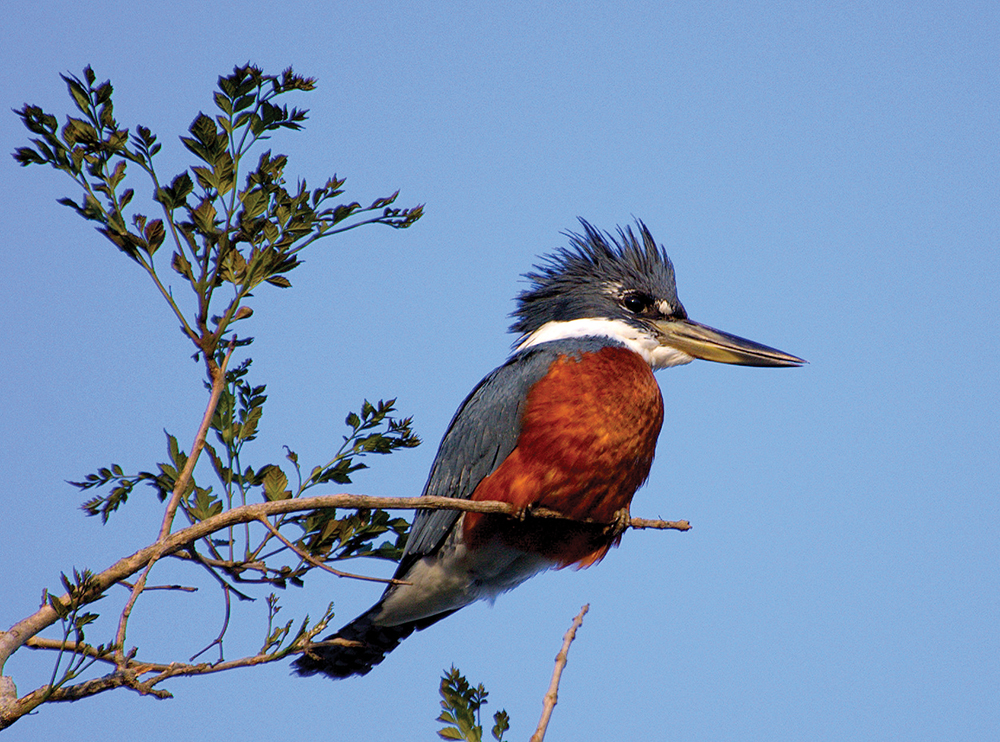 Common in the American tropics, the ringed kingfisher was considered rare north of Mexico until the 1960s. They are now commonly found in southern Texas, and continue to expand their distribution and breeding range northward in Texas. This king frequents large, slow rivers and varied types of waters such as lakes, marshes, estuaries, coastal lagoons, rice fields, canals, mangroves, and open beaches. They are often found in heavily wooded areas, but also forage on reefs up to half a mile offshore. However, they are most common in open areas, such as open shorelines and pools near larger bodies of water. Ringed kings are the largest kingfisher in the Americas, with an exceptionally enormous bill. They are bluish-gray above with a bushy crest, a white collar, and a recognizable red belly. Females have an additional blue-gray band on their breast, above the red belly. The large bill is blackish-grey with paler base. Eyes are dark brown. Legs and feet are grey.

Larger than the more familiar belted kingfisher, the ringed usually hunts from higher perches and takes slightly bigger fish, though like the belted, they’re opportunistic and will take frogs, insects, snakes, small mammals, berries, and even, occasionally, hummingbirds. They can be impressively patient when hunting, sometimes remaining perched for up to two hours while waiting for the right moment to strike. Unlike the belted, they seldom hover for more than a few seconds. When underwater they use their wings as both rudders and oars. After catching something, the ringed returns immediately to its perch and beats the prey vigorously against a hard surface before swallowing it head first.

Solitary except while breeding, both male and female ringed kings vigorously defend their territories throughout the year. They do this with loud, low-pitched calls and sometimes aerial chasing. Their voice is a penetrating rattle.

Like other kingfishers, they nest in burrows excavated in banks, generally along watercourses. The ringed kingfisher is usually solitary nester, but some observations mention small colonies of 4 to 5 nests, and one of 150 nests. (Fun Fact: a group of kingfishers is called a concentration.) Both sexes help dig burrow, which may be up to 8 feet long, with an enlarged nest chamber at the end. Little or no nest material is added, but debris may accumulate in chamber throughout the season. The female usually lays two to six smooth, glossy, white eggs, which are incubated by both parents on a layer of fish bones and scales. Young leave the nest 33 to 38 days after hatching and are fed by the parents for some time thereafter.

As with belted kingfishers, the availability of suitable nesting sites is critical for the distribution and local abundance of this species. Changes in water levels, caused by dams and water withdrawal, can impact habitat availability and suitability. Due to low population density and the species' general wariness, focused studies of environmental contamination are yet to be done.

A widespread resident of the Neotropics, the green kingfisher can be found from South Texas and Southeastern Arizona down to northern Chile and Argentina. They are always found near water, be it ponds and larger rivers, very small streams with only intermittent pools, flooded forests, or coastal mangroves. Unlike the ringed kingfisher who prefers an open view, the green favors areas where there is dense low growth on the banks, providing low perches close to the water. As their name suggests, these birds are predominantly green with white on the collar, throat, and belly, and white spotting on the wings and tail. Males have a bright red breast. Females have a white breast with a green spotted collar. At 8 inches tall, green kingfishers are about two-thirds the size of belted kings and only half the sized of ringed kings. They’re rather oddly proportioned, like a sparrow with the bill of a heron, and have a quiet but sharp ticking call.

The green kingfisher’s diet consists of minnows and other small fish, crustaceans, amphibians, and insects. They can eat their own body weight in food everyday. Like other kings, they hunt from a perch – watching for likely prey to swim near the surface, plunge diving to catch it, and returning to the perch to bash the prey before swallowing it whole. Greens seldom hover before diving, maybe because their preferred perches are so close to the water.

In Texas, greens breed from late February through late June. Like other kings, the green parents excavate a burrow in a vertical dirt bank, though theirs is on the small side, reaching about 3 feet in length with a diameter of about 2 inches. The entrance to the burrow is usually hidden by overhanging vegetation or roots, unlike other kingfisher nests where the entrance is usually exposed. At the end of the burrow is a slightly enlarged nest chamber with no added nest material. The female lays three to six smooth, glossy, white eggs on bare ground. Parents take turns incubating – female at night; male during the day. During this time, the floor of the egg chamber becomes paved with compacted fish bones, scales, and insect parts. Chicks hatch after 19 to 21 days and take their first flights 26 to 27 days after that. They will remain in their parents’ territory for about another month. Some burrows are reused the following year.

Though green kingfishers are year-long residents of Texas, they have never been abundant here, and their numbers have mostly declined since WWII because of urban development (loss and muddiment of waterways through damming and irrigation). However, recent conservation efforts have yielded small increases.

A fourth species of kingfisher, the medium-sized Amazon, has been seen few times in Texas, but they’re mostly considered a visiting dignitary, and not a reigning king of the land.

Where I learned about kingfishers, and you can too!