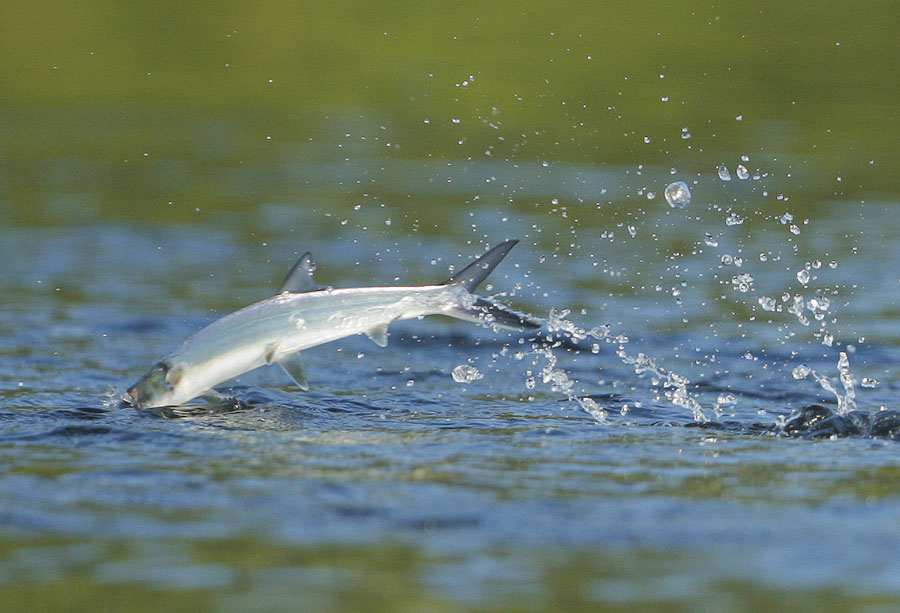 A ladyfish showing off how it gets the popular nickname
"They say catch-and-release fishing is a lot like golf. You don't have to eat the ball to have a good time." -Anonymous

Ladyfish and tarpon: one usually avoided, one highly sought after. Both excellent targets and prime catch-and-release candidates. And not surprisingly related. Ladyfish and tarpon belong to an ancestral order of bony fishes called the Elopiformes. Both are herring-like in appearance and produce elongate, transparent larva called leptocephalus, a larval type that today is found only in ladyfish, tarpon, bonefish, and eels, suggesting a close evolutionary relationship even amongst dissimilar fishes.(1) All of these species are considered to be some of the more ancient of living teleost fish groups.

The ladyfish, Elops sauros ("serpent lizard"), is a slender yet robust fish with a large, deeply forked caudal fin. It's body is rough with small, thin, silvery scales. They are typically found in warm brackish water, such as lagoons, bays, and mangroves, but they can tolerate a wide range of salinities. Though they are not obligate air breathers like tarpon, ladyfish do appear to be relatively tolerant of inadequate oxygenation of the blood.(2)

Ladyfish larvae go through three stages of development. Stage one is the leptocephalus stage, characterized by a long, ribbon-like, colorless, transparent body with large fang-like teeth, a small head, and teensy fins. They have no gills or red blood cells. During this stage, they absorb oxygen and nutrients directly from the water. In stage two, the larvae shrink. They start to lose the lepto look and begin growing into something more ladylike. Near the end of this stage, the larvae stops shrinking and starts growing again (now that its curves are in all the right places). Stage three is the last stage before becoming a juvenile fish. All last minute touchups are applied, and then it's off to meet the parents. Ladyfish can reach three feet long, weigh fifteen pounds, and live six years. As adults, they are primarily fish eaters, though crustaceans are also an important dietary component. The bigger they grow, the bigger they eat. This fish swallows its prey whole. Pretty much any fish smaller than them is fair game, including smaller ladyfish. No bonds of kinship in this bunch. And even though you won't often find ladyfish on our menus, sharks, dolphins, alligators, and some birds have no qualms with this meal.(3)

When hooked, the ladyfish is good sport for a light-tackle angler. It's skipping and jumping behaviors along the water surface have earned it the popular nickname of skipjack. The meat is typically bony and dry, which means this fish is great for catch and release.

On to Ms. Popularity. Tarpon are voluminous, deep-bodied fish, with big eyes, large scales, and a generous mouth. And did I mention she's single? In 1847, Valenciennes classified the tarpon under the genus Megalops, meaning large-eyed. Many people call it the silver king for its bright flashing scales when it jumps. Its enormous mouth, often exaggerated by anglers as being the size of a five-gallon bucket, is filled with tiny, densely packed teeth. Most unique about the this fish, though, is its modified swim bladder, which allows the tarpon to fill it directly with air gulped from the surface. This is a handy adaptation for oxygen-poor waters, but tarpon need access to atmospheric oxygen to survive in any environment, which is why even in oxygen-rich waters, they will still roll and gulp air.(4) They are found primarily in warm coastal waters, bays, estuaries, lagoons, etc., and can tolerate a wide range in salinity, from freshwater rivers and lakes to offshore waters.

The tarpon childhood is practically the same as the ladyfish: three stages, beginning with the leptocephalus. They are slow-growing fish and don't reach sexual maturity until six or seven years old. Females can grow over eight feet long and weigh 355 pounds. Males are generally smaller. A tarpon weighing 100 pounds is roughly 13-16 years old. They can live 55 years.(5) Adults are strictly carnivorous and mostly feed on midwater prey such as mullet, pinfish, marine catfish, Atlantic needlefish, sardines, shrimp, and crabs. They'll eat at any time of day, and be eaten at any time, mostly by bull and hammerhead sharks, but dolphins and alligators won't turn their noses up, given the chance.(4)

Tarpon are highly prized as recreational fish due to their tremendous strength and fast swimming speed. However, because they spook easily and are often very wary of humans, they occasionally (accidentally) injure people. Most injuries occur when anglers try to release the fish after a fight, though some happen when a tarpon inadvertently leaps into the boat.(5) Now that's easy fishin'!

"I have wondered whether it is the wildness in fish that somehow renews the wildness in us. After the hook is set and the shiver of something wild comes dancing up the rod, we seem somehow to be released from the confines of our over-civilized selves And in that instant, in that moment of abandonment to pure, uncluttered joy, there is, suddenly and momentarily, a brief glimpse into the untamed, unfettered, wild nature of what humankind once was, and what it still needs to be from time to time." -Paul Quinnett, Pavlov's Trout