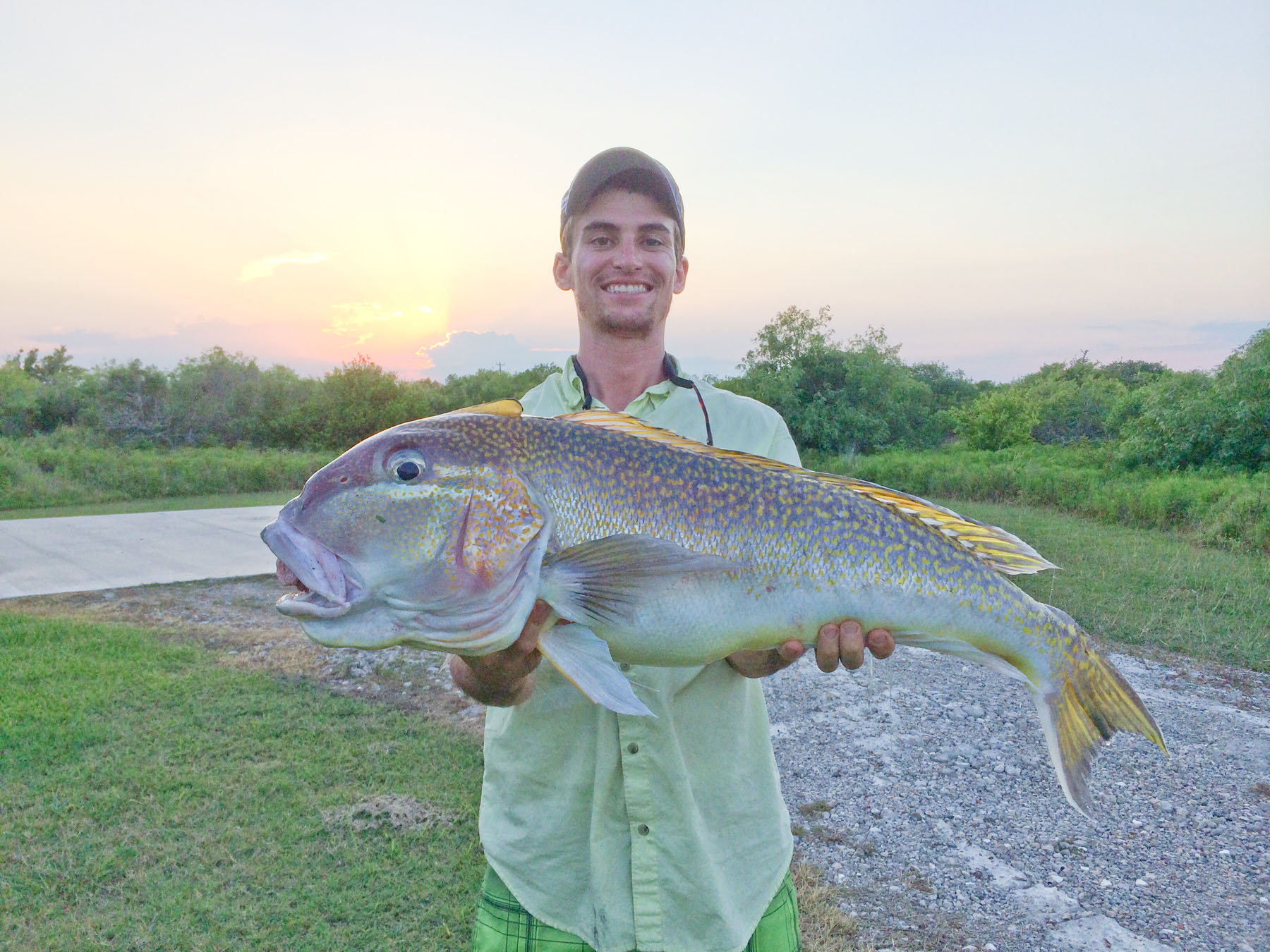 Colt Cook with his tilefish.
"Writers fish for the right words like fishermen fish for, um, whatever those aquatic creatures with fins and gills are called. "
~ Jarod Kintz

The great northern tilefish is one of six species of tilefish found in the Gulf of Mexico. It is the largest and longest-lived in its family, Malacanthidae. It can reach up to four feet in length, weigh over fifty pounds, and live longer than forty-five years. But despite their size and long life, this tilefish species wasn't discovered until 1879, when a cod trawler caught the first specimen by chance while working off the coast of Massachusetts. They were soon found to be excellent eating, however, and their abundance spurred a new fishing industry. But then, in 1882, culinary tragedy tilefish experienced a devastating die-off, in which an estimated billion tilefish floated dead in waters north of Delaware Bay. This near-annihilation of the species was caused by a shift in the flow of the Gulf Stream up the continental shelf, temporarily diverting these warmer waters and leaving the tilefish in a cold bath. Tilefish are intolerant of cold temperatures, and the population was thought to be extinct until they were rediscovered ten years later.

The species was named Lopholatilus chamaeleonticeps by George Brown Goode and Tarleton Hoffman Bean in their 1896 seminal work, Oceanic Ichthyology, A Treatise on the Deep-Sea and Pelagic Fishes of the World. L. chamaeleonticeps acquired its common name, great northern tilefish, from its considerable size and its discovery at relatively high latitudes (for a member of Malacanthidae). It is known by several other names, including golden bass, golden snapper, rainbow tilefish, "clown of the sea," and most commonly, golden tilefish. The back of this fish is iridescent blue-green, with many bright yellow and gold spots; the belly is white, and the head is rosy with blue under the eyes. Tilefish also have strategically placed spines around their fins and gills.

The golden tilefish's habitat is relatively restricted. It is a bottom-dwelling, shelter-seeking fish that lives in waters approximately 200-1700 feet deep and 46-63 degrees Fahrenheit and needs either ready-made dwellings or, more often, a malleable substrate in which to burrow. They are not a schooling fish, though they do tend to congregate in preferred housing areas. Although they'll use scoured out depressions under boulders, rocky ledges, etc., most construct burrows in clay outcrops. The tilefish's construction and expansion of burrows are the subject of ongoing research, but it is speculated that tilefish gradually widen and deepen preexisting burrows, possibly started by smaller crustaceans. The largest burrows are the product of a lifetime of excavation by individual tilefish. Sometimes crustaceans with a thirst for interior decorating will create a complex of smaller tunnels within the main burrow, join adjacent burrows, or even collapse part or all of a burrow complex. A burrow can be tubular or funnel-shaped, horizontal or vertical, and is often closely surrounded by many other burrows. The burrowing habitats of both the tilefish and their associated crustaceans can significantly alter the topography. Burrow complexes in the Gulf of Mexico can be as dense as 4,200 per square mile. On the outer continental shelf, in clay outcrops along the slopes and walls of submarine canyons, these complexes have been called "pueblo" habitat, named after Pueblo Indian constructions in the southwestern US. Since each new generation of tilefish may excavate new burrows, the habitat modification and erosion caused is significant. Tilefish burrows also provide a home for various different creatures that live in the area, especially crustaceans. Because of this impact on the continental shelf ecology, they were designated a keystone species by ichthyologist Ken Able in 1986.

Tilefish seem strongly attached to their burrows, sometimes refusing to move even when prodded. They differ from other shelter-seeking fish in that they enter their (often narrow) burrows headfirst, meaning they are only able to exit tail first. They are typically found one to a burrow, though sharing between male/female pairs has been observed.

The spawning behavior of this species is not completely known, but they are presumed to be polygamous, with the female choosing the male. But it's also possible that a dominant male controls access to several females (his harem) within a restricted area. Pair bonding (the forming of a close relationship through courtship and sexual activity with one other fish) has also been observed. Currently, golden tilefish are classified as gonochoristic, staying one sex throughout their entire lifetime. However, recent research has found evidence of a possible sex change in golden tilefish in the Gulf of Mexico, which would reclassify the species as protogynous hermaphrodites (beginning life as females and transitioning into males), like many grouper species.

Tilefish grow fastest during their first four years of life, about four inches per year. Their growth rate slows down significantly after that. They reach sexual maturity at about two feet in length and three pounds, between five and seven years old. Females seem to grow more slowly, but their lifespan is longer than the males. Average life expectancy is between 25 and 35 years. They begin excavating their burrows as soon as they morph from their planktonic larval states into juvenile fish. The primary function of these burrows is predator avoidance, though a tilefish will just as often try to out-swim its predators as retreat to its burrow. As juveniles, tilefish are preyed upon by dogfish and conger eels (which, in turn, are prey for adult tilefish). Sharks are also a possible predator, but the only known predator of adult tilefish is the goosefish, a type of angler fish. Adult tilefish are omnivorous, with a preference for bottom-dwelling invertebrates, particularly crab and lobster. (The saying "you are what you eat" rings true for this fish; people often describe the tilefish's sweet flavor as similar to crab or lobster). They'll also settle for hagfish, bivalve mollusks, polychaetes, sea anemones, salps, squid, spiny dogfish, mackerel, herring, silver hake, and other tilefish. And they won't turn up their nose at human trash, such as potato peels and meat bones. Tilefish are thought to be visual daytime feeders. However, they seem to have an active night life, and they appear to be attracted to the bait on longline hooks that are not within sight of their shelters, suggesting that food detection is more than visual, and that tilefish may lead a secret double life after the sun goes down.

Due to their long life expectancy, slow growth, and habitat specificity, tilefish are vulnerable to over-exploitation and mass mortality events, such as cold water intrusion. Currently, the Environmental Defense Fund (EDF) categorizes golden tilefish as highly susceptible to overfishing, and the species has consequently been subject to regulation. Tilefish are most commonly caught by longline, sometimes in bottom trawls, and are a popular sport fish. Regulations include catch limits and gear restrictions to prevent damage to the species' habitat and population. The EDF also warns that southern populations may contain mercury.

Where I learned about tilefish, and you can too!