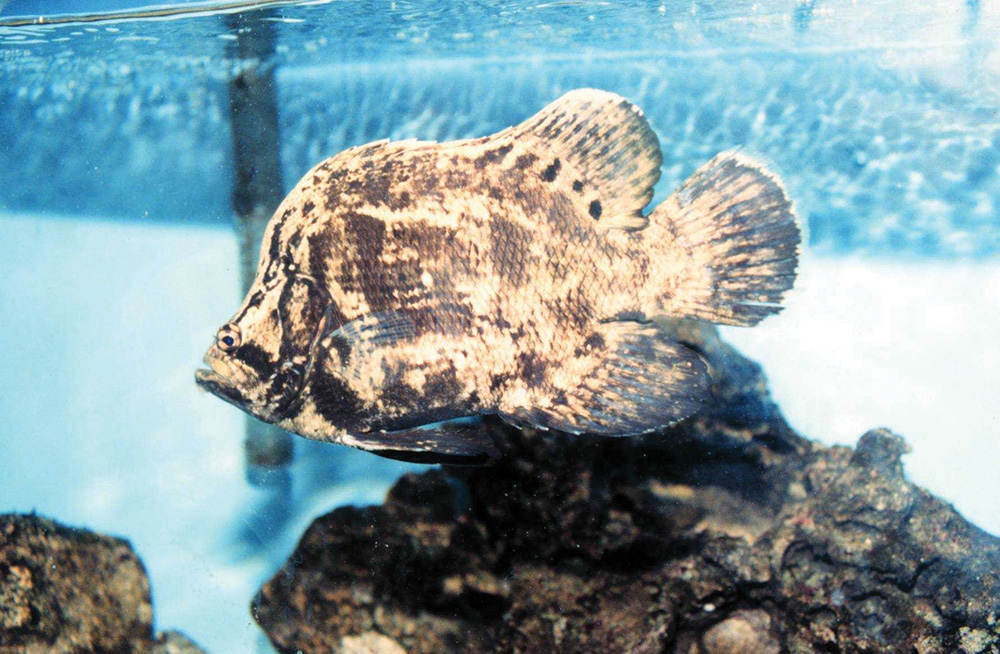 Tripletail are flat, almond-shaped fish with large, round dorsal and anal fins that are set well back near the tail fin (and rather resemble it). This tri-lobed appearance gives it both its common name and its genus, Lobotes (from the Latin lobus, meaning lobe). The species name, surinamensis, comes from the discovery origin, Surinam, in northern South America. Adult tripletails have various mottled color patterns, ranging from almost black to reddish-brown, yellow, or gray. They also have the ability to change color to mimic their surroundings. The body is laterally compressed and deep with a triangular head, similar to freshwater crappie. The concave profile of the forehead becomes more pronounced as the fish ages. Tripletail eyes are relatively small and located far forward on the head, giving the head a deceptively small appearance for housing such a large, diagonal mouth. Dorsal, anal, and caudal fins are scaled at the base, and pectoral fins are shorter than pelvic fins. The gill covers are sharply serrated. Adults often appear sluggish, lounging near the surface, floating on their sides near other floating objects (pilings, navigation markers, etc). They are frequently mistaken for debris. Their coloration and movements simulate a dead leaf – a very large dead leaf, since they can reach over forty pounds.

Though they are found world wide in most tropical and subtropical seas, tripletail are not very abundant in any particular location, and they are the only member of their family found in the Atlantic Ocean. In the Americas, they occur from Massachusetts south along the Atlantic coast and throughout the Gulf of Mexico, down through the Caribbean Sea all the way to Argentina. In the northern Gulf, tripletail are somewhat migratory, moving between the ocean in winter and inshore waters in summer. While on the Gulf Coast (approximately April through October), tripletail can be found in bays, sounds, and estuaries around the barrier islands, often in water less than twenty feet deep. They also haunt the mouths of rivers and passes, displaying some indifference to salinity. Though usually solitary, they congregate around shipwrecks, pilings, jetties, buoys, boats, beacons, and other floating objects, usually in the shadows. One Mississippi angler reported catching a tripletail that was loitering under a tennis ball. A little shade is better than none, I suppose. Juveniles are often found under patches of Sargassum.

These seemingly lazy fish are a curious mixture of looks and habits from other species. Shaped like a crappie, colored like a warmouth or a rock bass, swims like a flounder, but lounges at the surface like a gar. Although, “floats listlessly near the surface like a clump of leaves” might be a better description. But it’s all a deception. Tripletail are well-camouflaged ambush predators with a rapid strike. They are opportunistic feeders, taking an assortment of fish, including menhaden, bumper, minnows, and anchovies, in addition to swimming red crabs, blue crabs, shrimp, squid, and a variety of benthic crustaceans. The primary predators of tripletail are sharks and other large toothy fish.

As the popularity of tripletail increases, the life history and reproductive biology are becoming a more common subject of research, though still very little is known, comparatively. Spawning occurs primarily June through August, with a peak in July, along both the Atlantic and Gulf of Mexico coasts. It is thought that tripletail spawn offshore in deeper water, and the young drift into shallow areas to feed and grow. Larvae are usually found in waters more than 230 feet deep; they are rare in inshore waters. In the Gulf, females will spawn eighteen to thirty-one times per season, categorizing them as a multiple spawner species. A typical 24-inch female might produce 4.5 to 8 million eggs in a season. Larger females would produce more. Some anglers have reported seeing tripletail daisy-chaining. Usually associated with tarpon, ‘daisy-chaining’ is a colloquialism for when a group of fish bump, rub against, and follow each other around in a circle. Many believe this to be a courtship dance, but studies of tarpon have turned up no roe or milt nearby these rituals.

The larval forms of tripletail resemble those of boar fishes, jacks, spade fishes, and bigeyes, not that these species share much resemblance as adults. At four millimeters, tripletail larvae have large eyes and the beginnings of a concave forehead. They grow fastest in their first year, probably an adaptation to the high predation rate of small fishes. Juveniles are mottled yellow, brown, and black with white pectoral fins and a white margin on the tail. They resemble a mangrove leaf, and are practically invisible in floating debris.

A Gulf Coast Research Laboratory (GCRL) study of tripletail in Mississippi found that fifty percent of female tripletail are sexually mature at 17.6 inches and one year old. One-hundred percent are mature at 19.7 inches. Males mature earlier. Fifty percent are sexually mature at only 10.6 inches. Females are typically somewhat larger than males, but there is no other dimorphism between the sexes. Adults reach a length of more than three feet and over forty pounds, but specimens encountered by anglers are usually two to sixteen pounds. They are believed to live up to ten years.

The IUCN Red List classifies Lobotes surinamensis as Least Concern. As tripletail have become a popular sport fish, regulations have been enacted by Gulf Coast states. Little data exists on population statuses in the Gulf, but the high recapture rate from ongoing tagging research indicates the possibility that this species may be more susceptible to harvest than some other sport fishes. The tripletail’s fondness for lounging at the surface makes it a good sight-fishing target, and they are vigorous when hooked. They are not the most skittish fish – you can often get within a few feet while they pretend to be a dead leaf – but they can be quite motor-shy. Cutting the outboard motor when nearing a likely structure or using an electric motor is recommended when fishing for this species. Also beware the serrated gill cover and sharp dorsal spines when claiming your prize. Tripletail filets are a firm white meat, often compared to grouper and snapper. In cooking, they are usually treated like specks. The meat isn’t great for a grill (unless skin and scales are left on) as it flakes easily.

The GCRL has maintained a tripletail tag and release program since 2001. In the first thirteen years, 3400 fish were tagged and released, mostly by volunteer anglers. 352 of those were recaptured, a rate of 10.4 percent. The data showed that most tripletail on the northern Gulf are recaptured within twenty-five miles of their tag site. Tagging kits are free through GCRL’s Sport Fish Tag & Release Program. The kit includes dart tags, tag cards, a tag applicator, an instruction booklet, and a pencil. Properly inserted tags leave no long-term injury and can remain firmly implanted for years. Anglers who target tripletail are encourage to participate in this tagging program.

Where I learned about tripletail, and you can too!

Fishes of the Texas Laguna Madre
By David A. McKee