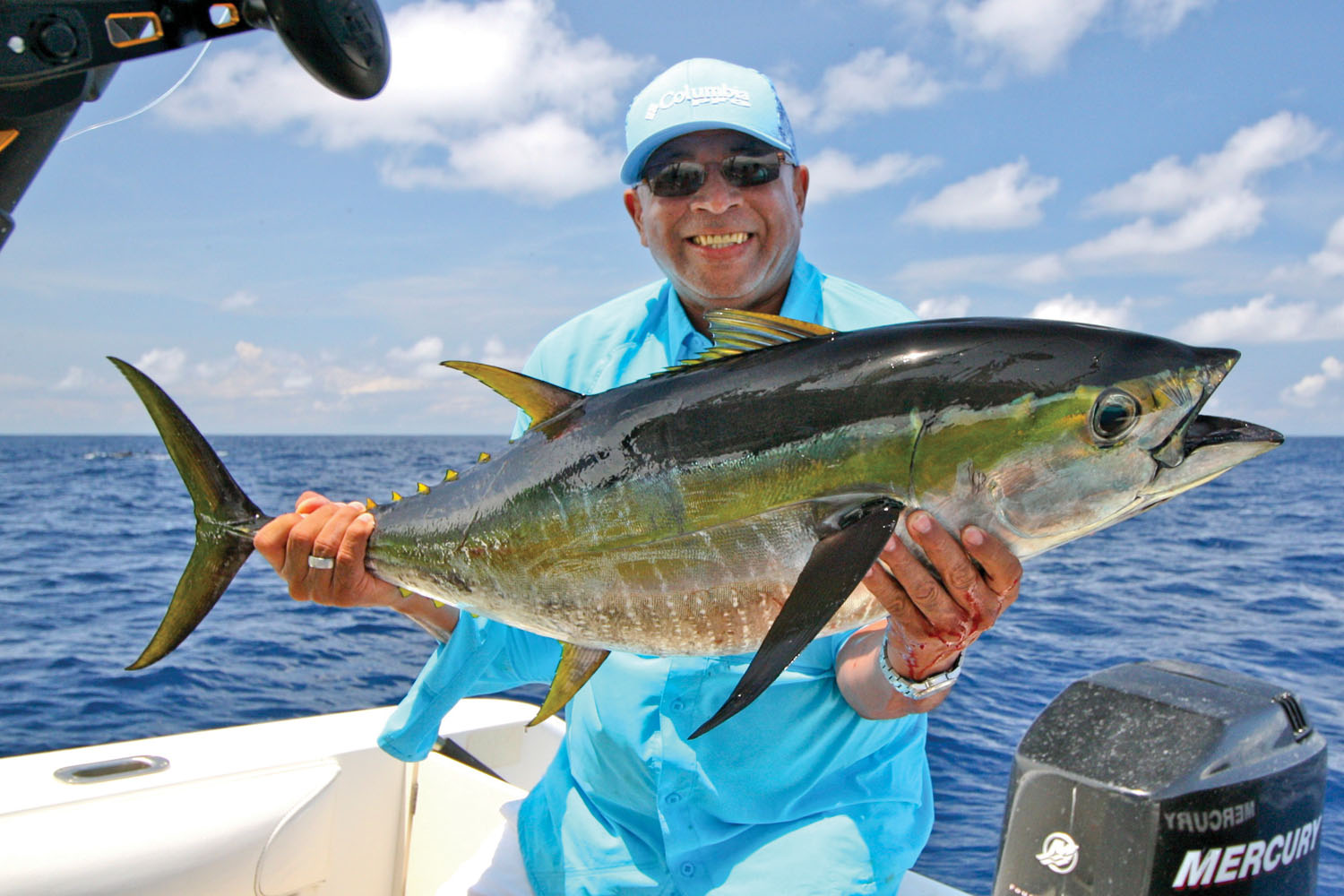 “I can’t ever get enough; I want more, I need more!
Your soft savory texture hugs my mouth and warms my core.
I swallow you wearing a smile unlike any I’ve worn before,
Your gentle ocean tuna taste lingers and leaves me wanting more.
~Ryan Unger, excerpt from “Fatty Tuna: A Love Poem”

Tuna are a streamlined saltwater fish belonging to the Thunnini tribe (in biology, a tribe is a taxonomic rank above genus but below family). “True” tunas belong to the genus Thunnus. However, the Thunnini tribe also includes mackerel and bonitos. The term tuna ultimately derives from the Ancient Greek word thýnō, meaning to rush or dart along – a fitting description for these sleek, powerful fish. Tuna inhabit the upper and middle layers of the ocean worldwide, except in polar seas. These impressive animals are active, agile predators, the largest of which can reach over ten feet in length, weigh well over half a ton, and are capable of speeding through the water at over 40 miles per hour.

Several species call the Gulf of Mexico home, at least for some part of their lives. Skipjack tuna, Katsuwonus pelamis, are on the small-medium end, reaching about 3.5 feet long, 66 pounds, and living up to fifteen years. They are distinguished by four to seven dark longitudinal stripes on the belly. Dark blue backs are accentuated by a clearly defined area of green above the pectoral fin. Flanks and belly are silvery; fins are short. Skipjack often swim in large schools, sometimes mixing with young yellowfin tuna. Their very large biomass (exceeding that of the next three most popular tuna species combined) and quick sexual maturation (around one year) earns them a rating of Least Concern on the IUCN Red List.

Next is the yellowfin tuna, Thunnus albacares, runner up in both the volume fished and overall popularity. Easily recognized by the sickle shape of the anal and second dorsal fins. Grows to 6.5 feet long, 385 pounds, lives up to eight years, and is the fastest tuna, reaching almost 50 miles per hour. In some areas, dolphins and large yellowfin school together. The yellowfin’s popularity earns it a Near Threatened (NT) rating on the IUCN Red List. There was an estimated 33 percent global decline between 1998 and 2008 (the equivalent of three generation lengths), and the species is listed as NT primarily because population declines would be much greater if catch quotas had not been implemented.

The “chicken of the sea,” albacore tuna, Thunnus alalunga, is possibly the most popular canned tuna in the States. Albacore have long pectoral fins, which reach along their dark blue backs and blue-gray flanks, past their anus. They grow just over 4 feet long, 88 pounds, and live up to fifteen years. Its popularity has also earned it a rating on the IUCN Red List of Near Threatened. There was an estimated 37 percent global decline between 1987 and 2007 (the equivalent of three generation lengths). Commercial fisheries are present in all parts of the albacore’s range, and although effective management measures are now in place in many regions, the North Atlantic and North Pacific stocks are still being fished above the maximum sustainable yield.

Bigeye tuna have long pectoral fins that extend well past the anal fin which, together with their large eyes, characterize the species. They grow up to 7.5 feet long, 463 pounds, and live up to fifteen years. They tend to swim at greater depths than skipjack and yellowfin, and therefore have more fat to insulate them from the cold. This makes them especially attractive for the Japanese sashimi market. Their attractiveness earns them a Vulnerable ranking on the IUCN Red List. There was an estimated 42 percent global decline between 1992 and 2007 (the equivalent of three generation lengths). With the exception of the Western and Central Pacific populations, all other stocks are being fished below the maximum sustainable yield. However, the Western and Central Pacific stocks represent more than 20 percent of the global population; additionally, if the mortality of the species from skipjack fishery bycatch cannot be reduced, further declines are likely.

Northern bluefin tuna (aka Atlantic bluefin), Thunnus thynnus, are the slowest-growing tuna species. They take four to eight years to sexually mature, can reach over 10 feet in length, 1500 pounds, and live up to twenty-five years. The back is dark blue to black with silvery lower sides. Second dorsal fin is larger than the first one, and usually reddish-brown. The northern bluefin’s slow growth, in combination with the over-exploitation of its stocks, has earned it an Endangered rating on the IUCN Red List. This species has become rare, relative to historical levels, because of massive overfishing. The estimated global decline is 51 percent over the last thirty-nine years (the equivalent of three generation lengths). The Western Atlantic stock has not recovered under current fishing restrictions, and in the Eastern Atlantic stock (which represents the majority of the northern bluefin’s global population), fishing mortality is far above the maximum sustainable yield. And as bad as it is for the northern bluefin, the southern bluefin have it much, much worse. But they’re not from around here, so you’ll have to google their sob story for yourself.

Last that I will mention is the blackfin tuna, Thunnus atlanticus, a bluish-black tuna with silvery-gray sides, a milky-white belly, and dusky fins. One of the most common tuna species in the Western Central Atlantic, the blackfin grows up to 3.5 feet long and 42 pounds. They feed near the surface and often form large mixed schools with skipjack. They reach sexual maturation around 1.5 feet in length. Happily, like their buddies the skipjacks, blackfins have a Least Concern rating on the IUCN Red List.

Technically, fish are poikilothermic, meaning their body temperature varies according to the temperature of the surrounding medium. You probably know this as “cold-blooded.” However, some powerful swimmers, such as tuna, have evolved adaptations that make them essentially homeothermic (“warm-blooded”). Tunas have a large mass of red muscle that powers their incredible speeds. These muscles generate a lot of heat. In most fish, this heat is simply discarded when warm blood reaches the gills. But tuna retain this heat through an intertwined meshwork of veins and arteries, known as the rete mirable, or “wonderful net.” Cold blood being carried in the arteries from the gills is heated by warm blood being carried in the veins from the muscle. By the time arterial blood reaches the muscle, it’s already warm and therefore doesn’t cool off the hard-working muscle, allowing the fish to swim at maximum efficiency. Additionally, the pink/red color of the tuna’s muscle tissue is actually a result of myoglobin, an oxygen-binding molecule that tuna produce in higher quantities than many other fish. This leads to more oxygen-rich blood and, consequently, more energetic muscles. And as an added benefit, the heat transfer also slows down the rate of cooling at the body surface, allowing the tuna to maintain a core temperature above the ambient seawater, which in turn, may promote rapid digestion and absorption of food.

These sleek, streamlined fish have other adaptations for speed, as well. The first dorsal fin is depressible; it can be laid down, flush, in a groove running along the back. The fins are of a size and position designed to minimize drag, so relatively small expenditures of energy are needed to reach (and maintain) maximum speeds. Median fins, especially the dorsal, are often relatively large, which minimizes “the drag associated with sideways slippage of the body during swimming.” But with great speed comes great… side effects. Tuna must swim at least one body length per second to pass enough oxygen over their gills. This steady, powerful swimming sustains the large oxygen demand required by their high metabolic rate and extraordinary growth. Cavitation is also a hindrance. You wouldn’t think bubbles could have such effect, but they create a vapor film around the fins, limiting the tuna’s speed. They also cause lesions on the tail, though tuna don’t have nerve endings in the fins, so they probably don’t feel it. However, some animals, such as dolphins, do have the capability to feel the collapsing cavitation bubbles and may choose to restrict their speed to avoid the pain. Tunas do sense their environment, though, mainly through visual and chemical cues. They also have a well-developed lateral line, a system of sense organs found in aquatic vertebrates, used to detect movement and vibration in the surrounding water.

Tune in next month for more tuna anatomy!