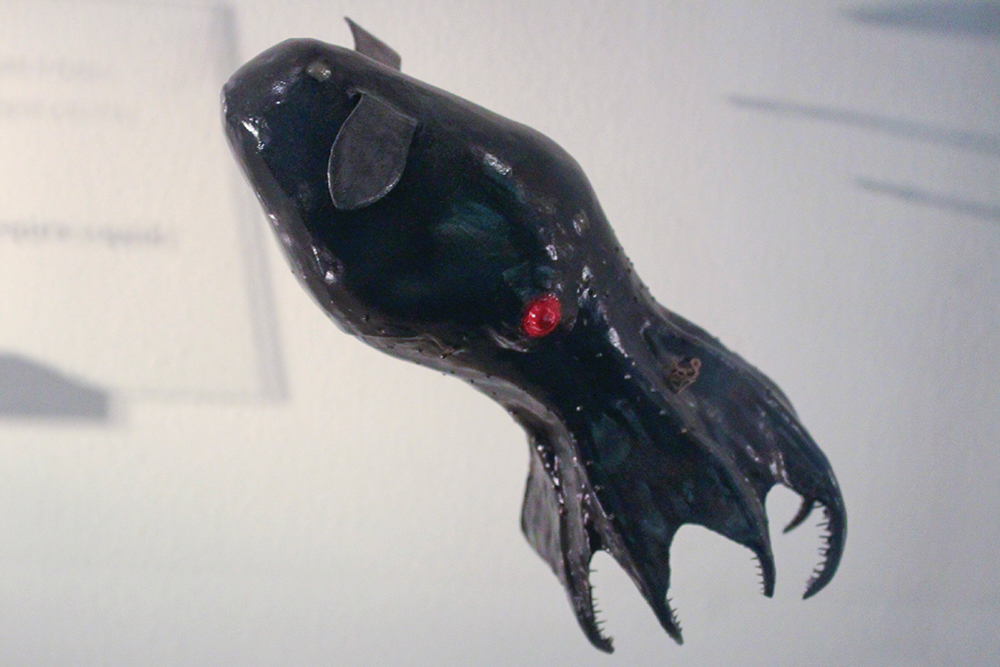 In 1925, on a survey expedition near Panama for the New York Zoological Society, William Beebe’s crew hauled in “a very small but very terrible octopus, black as night, with ivory white jaws and blood-red eyes." It was Vampyroteuthis infernalis, literally “the vampire squid from Hell” – first described in 1903 by Carl Chun, a German teuthologist (someone who studies cephalopods) who identified it as an octopus, because it had eight arms, or so he thought… Vampire squids are the only members of their order, Vampyromorphida. They are a phylogenetic relict, the first group to evolutionarily diverge from octopuses, possessing features of both octopuses and decapodiformes (squid, cuttlefishes, etc.). It’s easy to imagine the vampire squid as a thing of nightmares, lurking in the deep sea. But in reality, it’s a soft-bodied, passive creature about the size of a football. They have large blue or red eyes (depending on light conditions), proportionally the largest eye-to-body ratio of any animal in the world. Cloak-like webbing stretches between eight main arms, the insides of which are covered with fleshy spikes (cirri). Suckers are located on the distal (lower) half of the arms. A fifth pair of filamentous arms extend well past the total length of the body, and can retract into pockets in the webbing. These two arms differ in structure and composition from the other eight and are believed to be a uniquely derived trait of this species. Beaks, located in the center of the circle of arms, are white. Adults have two fins near the top of the mantle (main body section). Vampire squid have black chromatophores interspersed with reddish-brown ones, which determine their coloration. In most of the world's oceans, the black chromatophores dominate the general pigmentation, but off central California the reddish hues are more frequently encountered. Unlike true squids, however, vampires have lost the muscles that enable rapid color change – though they do have a few normal chromatophore organs in their photophores (light-producing organs) located on the tip of each fin and across the mantle. They also lack the ink sacs found in true squid species.

The body composition of the vampire squid is similar to that of a jellyfish: gelatinous and somewhat delicate. Because of their weak muscles, vampire squid were thought to be slow swimmers, but they can actually swim rapidly for short periods of time using their fins. They also have a highly developed statocyst (a sac-like organ that aids in balance, similar to our inner ear) that gives them agility and statolith in the statocyst that senses gravity, so to speak, and aids in balance. They can reach two body lengths per second, and can accelerate to this speed in five seconds. The vampire squid occupies meso- to bathypelagic depths throughout the world's tropical and temperate oceans (including the Gulf of Mexico) where little to no light penetrates, temperatures average near freezing, and oxygen saturation is less than 5 percent. To cope with these conditions, they have hemocyanin (copper-based blue blood) that binds oxygen more efficiently than hemoglobin (iron-based red blood), gills with especially large surface areas, and a very low metabolism. While the vampire squid can move rapidly over short distances, it is not capable of extended fight or flight responses, so when threatened, it has a few options. It can make a quick – albeit short – escape, zig-zagging erratically through the water. It can also assume a defensive posture, called the “pineapple posture,” where it folds its arms and webbing back up over its mantle, displaying its admittedly intimidating cirri. This position protects the mantle and also further camouflages the vampire since the inside of the webbing is the most densely pigmented (black) region of the animal, except for the very tips of the arms, which are unpigmented. This allows for the vampire’s third line of defense: bioluminescence. The arm tips can glow or pulse at a rate of one to three flashes per second, and when the vampire writhes its arms, rapidly exposing then hiding the luminescence, it can be very disorienting for a predator, or any other observer, trying to visually fix the vampire’s position. The vampire can also glow or flash from its photophores. In addition, it can expel a bioluminescent cloud that can glow for nearly ten minutes. When the light show ends, it is practically impossible to tell whether the squid has darted away or simply faded into the abyssal waters.

While Dracula may have preferred his prey alive, vampire squids are rather less demanding. They eat marine snow – detritus consisting of bits of dead planktonic creatures and fecal matter that falls down from the sea surface. They drift along with one long filament deployed until contact with food is made, then they swim around the food until it is collected. They combine the detritus with mucus from their suckers to make a ball of food, then transfer it to their beaks to eat. It doesn't seem like much to fuel a foot-long cephalopod, but vampire squids complement their frugal diet with an extremely energy-efficient lifestyle and unique adaptations. Their bodies neither sink nor float, so they don’t have to expend energy to stay at a particular depth. They don’t have to swim to find food; they just stick out an arm, and food comes to them. (They tend to live deep below where there is an abundance of life near the surface, which in turn creates lots of marine snow to munch on.) Finally, they don’t often have to dodge predators, because they live at depths where there is so little oxygen that few other animals can survive, though their beaks have been found in the stomachs of large, deep-diving fishes, seals, sea lions, whales, and some bottom-dwelling fishes.

Because small vampire squids occupy deeper water than larger vampires, spawning probably occurs in very deep water. The vastness of their habitat and sparse population make romantic encounters a rare and lucky event. The male transfers a sperm packet to the female, who stores it until she’s ready to fertilize her eggs. Females have rather small oviducal glands, so eggs are probably only produced in small amounts. Eggs are about 3.3 millimeters long and are found year-round, free-floating in small masses; hatchlings are about 8 millimeters and closely resemble adults. Fin development is unique among cephalopods in this species. Hatchlings have one pair of fins near the eyes, but as they become juveniles (when their mantles are 0.5-1 inch in length), they grow a second pair of fins farther up the mantle. Once the second pair reaches full size, the first is reabsorbed. The development of the second pair of fins changes the vampire squid's primary swimming style from jet propulsion to fin propulsion. The unique fin development caused some confusion in the past, with the different stages of growth identified as separate species in distinct families, when only one species actually exists. Growth is slow, as nutrients are not abundant. At maturity, the female vampire is larger than the male. Because the vampire squid lives and feeds so deeply, it isn’t commercially fished and currently has no economic benefit or detriment to humans. Vampire squids are currently unevaluated by the IUCN Red List.

Where I learned about vampire squids, and you can too!

Aquarium of the Pacific
www.aquariumofpacific.org/onlinelearningcenter/species/vampire_squid