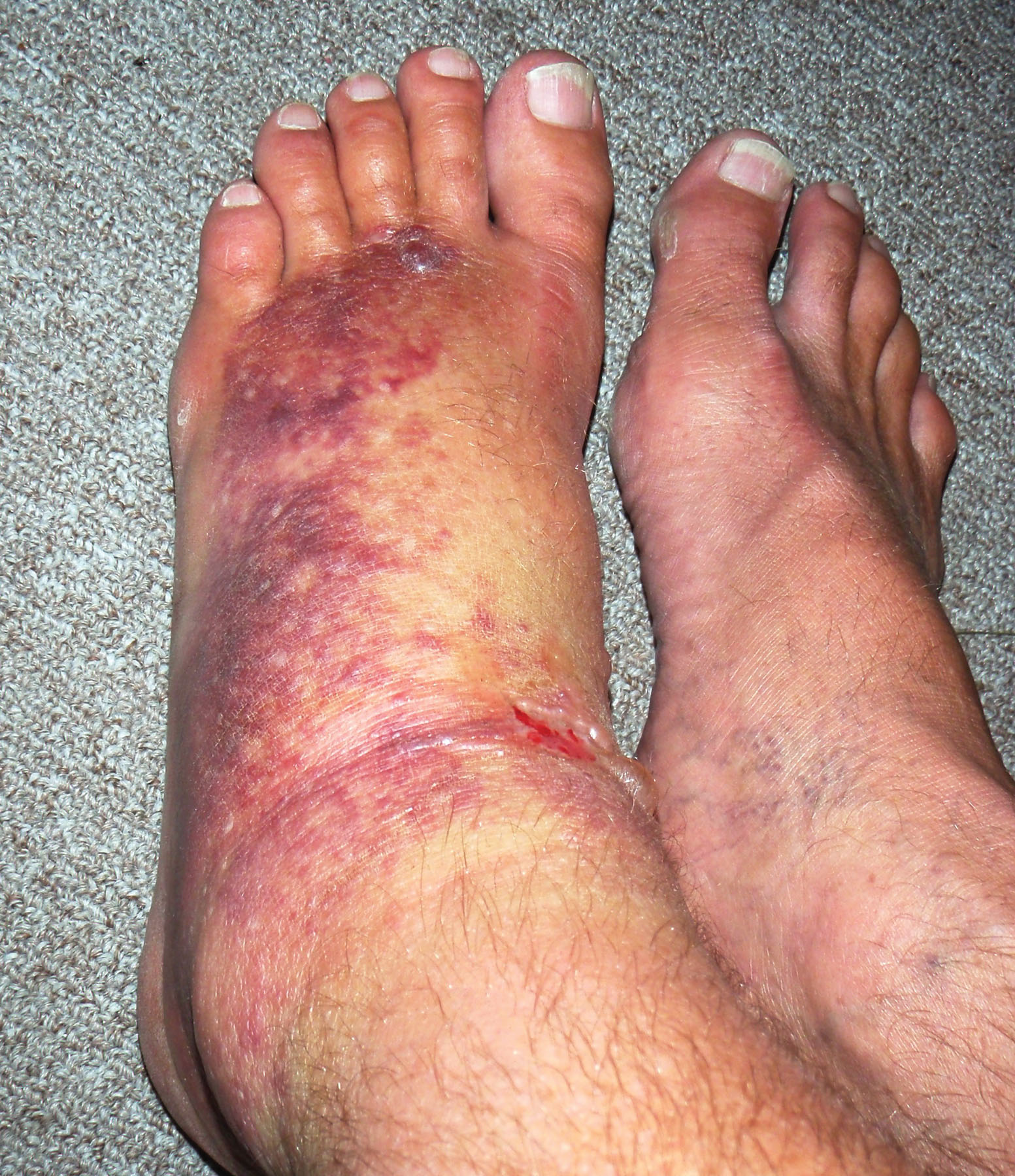 36 hours after a stingray hit, an extreme bacterial infection is brewing. Photo by Mike McBride.
Excerpt from a June 2014 article...

The most sensationalized vibrio is Vibrio cholerae, which causes epidemic or Asiatic cholera which, untreated, is one of the most rapidly fatal infectious diseases known. The cholera toxin, which is the classic model of a bacterial enterotoxin, is also produced by some strains of E. coli. An enterotoxin is a protein exotoxin released by a microorganism. Exotoxins may be secreted during growth or released when the bacterial cell dies and breaks down.

You certainly wouldn't want to room with V. cholerae. But making you sick is the byproduct of its company, not the objective. Vibrio bacteria don't directly attack a person's body. Rather, they produce proteins, as a byproduct of feeding and growth, that are toxic to the human body. It's like being allergic to cat fur. The cat isn't actively clawing your eyes out, but she IS leaving her fur everywhere, making you miserable in the process. Still, it's a good reason to avoid cats.

Most bacteria secrete a peptidoglycan covering for themselves, which we call a cell wall. Whether a bacterium has a thin or a thick cell wall determines what antibiotic will work against it. If you've ever waited for the results of a culture and sensitivity test, you may have heard the terms "Gram-positive" or "Gram-negative." This is the legacy of a cell-staining method developed by Christian Gram: bacteria with thick cell walls retain dye and are labeled Gram-positive; bacteria with thin walls do not and are labeled Gram-negative.

Some antibiotics, like penicillin, don't outright kill the bacteria; they just prevent the bacteria from making more cell wall, halting the bacteria's growth. That's why antibiotics typically need to be taken for several days. The bacteria, unable to grow, die of "old age." If a person stops taking the antibiotic too soon, any bacteria still living would resume growing and reproducing; stopping early also contributes to the propagation of antibiotic-resistant strains of bacteria. Antibiotics tend to be more effective against thick-walled bacteria, the Gram-positives. Gram-negative bacteria are more resistant. That's why it is important to determine which of the two types of bacteria have moved in.

Thanks to improved sewage and water treatment, there is a low occurrence of V. cholerae in the United States. Over ninety percent of the cholera cases occurring in the U.S. are the result of travel to a country where this species is prevalent; recurring infections of cholera are rare.

Other headlining species of Vibrio include V. parahaemolyticus and V. vulnificus, known to cause seafood-borne illnesses such as septicemia and wound infections.

V. parahaemolyticus seems to be the more amiable of the two. Raw or undercooked seafood, usually oysters, are the primary culprits of the acute gastroenteritis caused by this bacterium. Wound infections can also occur in warm seawater but are less common than seafood-born maladies. Higher water temperatures breed higher levels of bacteria, so outbreaks are more common in summer and early fall. Symptoms typically occur in about 24 hours and include watery diarrhea, nausea, vomiting, abdominal cramps, and sometimes fever and chills. The illness usually resolves itself in three days, but it can persist for up to ten days in immunocompromised individuals. Treatment is unnecessary in most cases. Antibiotics don't seem to decrease the severity or the length of the illness anyway. Drinking plenty of liquids and electrolytes to replace fluids lost through diarrhea is the best course.

V. vulnificus is responsible for the majority of seafood-related deaths. Immunosuppressed individuals are 80 times more likely to contract Vibrio infections, though these bacteria are capable of harming anyone. However, most cases occur in males over the age of 50. Turns out, estrogen protects females against the V. vulnificus endotoxin. Endotoxins, also known as lipopolysaccharides (LPS), are part of the outer membrane of the cell wall of Gram-negative bacteria. They are released when the bacterial cell disintegrates (whereas the other toxins are usually a byproduct of growth; endotoxins are a byproduct of death).

V. vulnificus primarily spreads through contaminated seafood; it does not alter the appearance, taste, or odor of oysters which, again, are the primary culprits. It can also be contracted by an open wound that is exposed to seawater. Among healthy people, ingestion of this bacteria can cause vomiting, diarrhea, and abdominal pain. In the immunocompromised, V. vulnificus can infect the bloodstream, causing septic shock and blistering skin lesions. These bloodstream infections are fatal about fifty percent of the time. If this bacteria is suspected, treatment should be initiated immediately because antibiotics improve survival. Luckily, V. vulnificus infections are rare.

These vibrios are potentially dangerous, but a little overdone in the media. Just take the correct precautions when preparing seafood, especially shellfish and don't swim in the bays with a significant open wound. It's not inconceivable that you'll have a rough experience with one, at some point in your life, but the probability is low.

Vibrios are kind of a downer, so it's nice to know the human body contains huge amounts of friendly bacteria, even some that protect us from dangerous ones by occupying places in the body the pathogenic bacteria want attach to, and some that actively come to the rescue and attack the pathogens. So don't let one group of bacteria taint your worldview!