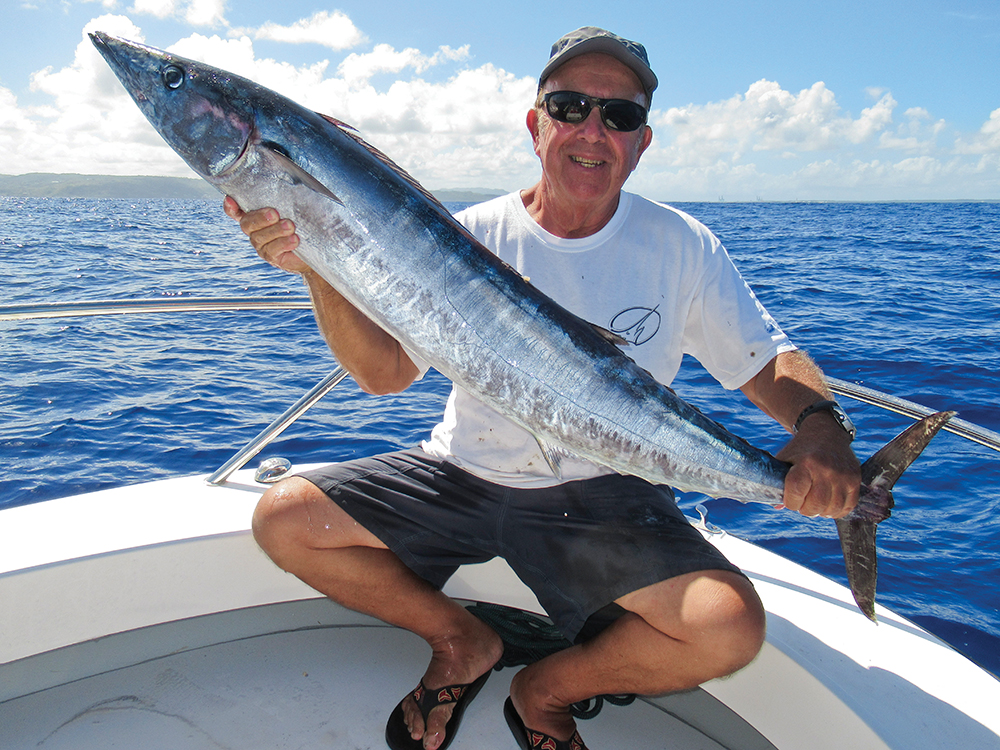 Photo by Richard Segal from Pexels.

The wahoo is a large, predatory mackerel that lives in tropical and subtropical oceans around the world. Reaching up to 8 feet and 180 pounds, this species is larger than any other non-tuna in the mackerel family. Wahoo are also known as ono, after the Hawaiian word for ‘delicious.’ Some say the common name ‘wahoo’ derives from the Hawaiian Island name, Oahu. European explorers who first mapped the Hawaiian Islands found ono to be plentiful off the coast of Oahu, and maps of the time indicate that ‘Oahu’ was often spelled ‘Wahoo.’ Others say the name derives from the exclamation of anglers who have hooked into this extremely fast running species. The genus name, Acanthocybium, is derived from the Greek words akantha, meaning thorn, and kybion, meaning young tunny (so basically it means ‘thorny tuna’). Also known as the Pacific kingfish, it is a highly prized recreational fish because of its speed and quality.

A long, slender mackerel with a sharply pointed head and a widely forked tail, the wahoo is a dark iridescent bluish green along its back, with 25 to 30 dusky blue vertical bars that extend down the silvery gray sides and fade rapidly after death. Jaws are elongated to form an almost beak-like snout that’s as long as the rest of the head and filled with triangular, finely serrated teeth. The gill structure resembles that of the marlin, but lacks the marlin’s characteristic gill rakers. A well-defined lateral line runs the length of the body, abruptly curving under the first dorsal fin, and extending in a wavy line back to the tail (the lateral line is a series of sense organs which detect pressure and vibration). The first dorsal fin is long, low, and has 21 to 27 spines (hence the ‘thorny’ part of the genus name). It is separate from the second dorsal fin, which has about 14 rays. The anal fin has a similar number of very small rays. They usually grow to between 3 and 5 feet long, but the state record is just over 6 feet, 124 pounds (1987), and the IGFA all-tackle record is 158 pounds, taken off Baja California (1996). Latitude appears to influence size; average weights increase with distance from the equator, apparently correlated to cooler temperatures. Wahoos are sometimes confused with king mackerel, Spanish mackerel, and even barracudas. They can be distinguished from the former two species by a fold of skin which covers the mandible when its mouth is closed (and which is always visible in the king and Spanish mackerels). Barracuda have more prominent scales, larger, dagger-like teeth, and lack the deeply forked tail of the wahoo.

Wahoo live near the surface and are frequently found alone or in small, loosely connected groups rather than compact schools. They are found in the north Atlantic off the Carolinas and Bermuda, the Gulf of Mexico and off the west coast of Central America, the Mediterranean Sea, the Indian Ocean, from the east coast of Africa to the waters off Sri Lanka, the Indo-Pacific, and in the central Pacific Ocean. Wahoo move with the changing seasons, traveling into cooler waters during warm summer months. Scientists don’t know much about their migrations, but one study revealed that a tagged and recaptured fish had traveled 1,700 miles in 6.5 months. They associate around banks, pinnacles, sargassum, and even flotsam, and are occasionally found around wrecks and deeper reefs, where smaller fish are abundant.

Although wahoo are attracted to floating debris, their diet suggests they venture out to forage in open waters. Wahoo are powerful swimmers and aggressive predators that prey on a variety of schooling fishes and pelagic squids. They have been recorded feeding on tunas, porcupinefishes, flyingfishes, dolphinfish, jacks, herrings, pilchards, scads, lanternfishes, and many other species. It is thought that their sharp, serrated teeth allow them to render large prey into bite-sized pieces, allowing them to eat fish larger than themselves. Unlike true tunas and billfishes, this species does not have the ability to regulate its body temperature, but it is still one of the open ocean’s fastest fish. Wahoo have been recorded swimming at speeds of nearly 50 miles per hour in short bursts. When excited – particularly when hunting – wahoo often flash different colors or display/hide the vertical bars on their sides, perhaps in an attempt to confuse their prey. Adult wahoo are only eaten by the largest open ocean predators, like pelagic sharks and billfishes.

Wahoo are fast growing and have a short life span, up to 5- or 6-years, on average. Spawning appears to occur over an extended period of time, year-round, with multiple events per year, as fish in different maturity stages are frequently caught at the same time. During spawning events, wahoo form largish aggregations and reproduce via broadcast spawning: females release their eggs and males release their sperm at the same time. Broadcast events occur several times within a spawning season, and females produce several million eggs each year. Eggs and larvae are pelagic. The size of wahoo at hatching is 2.5 mm, and larvae seem to prefer shallow water less than 330 feet in depth. After reaching a length of about 40 inches, individuals grow at a rate of up to 1.5 inches per month. They grow so rapidly that both sexes reach sexual maturity during the first year of life – males at 2.8 feet in length, females at 3.3 feet.

Though they are considered a commercially important species, wahoo aren’t generally the primary target of the fisheries that utilize them, likely because they don’t form large schools. In the areas where they are caught commercially, they are marketed fresh, salted, spice-cured, or frozen. They are often sought by sport anglers, especially in the US and Australia. Wahoo have solid white flesh which, when cut into slices, shows circular rings. It is usually cut for steaks and fillets, and is excellent for grilling, though it has been linked to ciguatera poisoning (an illness caused by eating fish that contain toxins produced by a marine microalgae called Gambierdiscus toxicus). According to NOAA Fisheries, “U.S. wild-caught Atlantic wahoo is a smart seafood choice because it is sustainably managed and responsibly harvested under U.S. regulations.” However, the population status and fishing rate are unknown because scientists don’t formally assess wahoo populations. They assume wahoo populations are stable because the species is highly productive and widely distributed. Wahoo are managed in the Atlantic by the South Atlantic Fishery Management Council and in the Pacific by the Western Pacific Fishery Management Council. Both have management plans. In the Atlantic, it is called the Fishery Management Plan (FMP) for the Dolphin and Wahoo Fishery of the South Atlantic Region. The FMP is currently trying to regulate current harvest levels. In the Pacific, it is in both the Pelagic Fisheries of the Western Pacific Region FMP and the Highly Migratory Species FMP. The Pelagic FMP is working on the future framework for management in the Exclusive Economic Zone for the U.S. Pacific Islands; in the Highly Migratory FMP, wahoo are being monitored as another fishery’s bycatch. Although wahoo seem to handle relatively high fishing rates well, precautionary management seeks to maintain current harvest levels.

Where I learned about wahoo, and you can too!