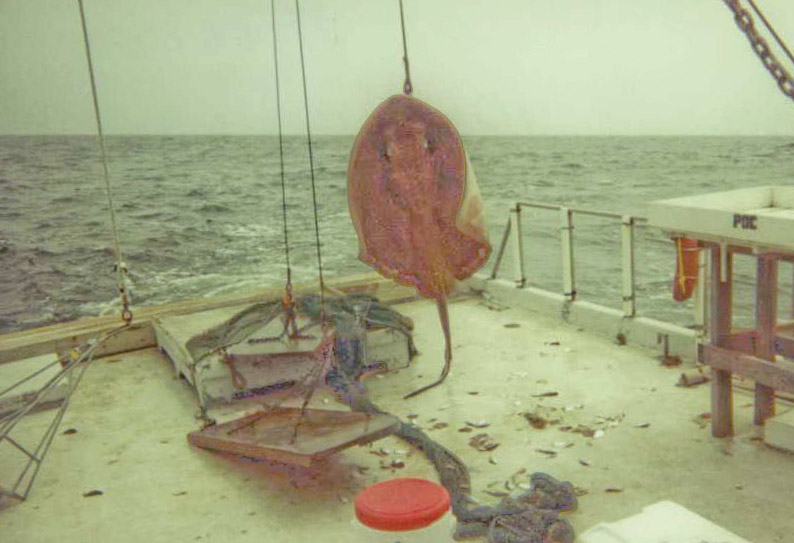 A southern stingray pulled out of trawl nets, released!
Of the elasmobranchs (sharks, skates, & rays), sharks get all the glory. They get the movies and myths, the terror and respect, and the subsequent scientific interest provoked by their infamy and by being an apex predator. But there's another elasmobranch living on the Texas coast, one whose presence might be more significant to the wading angler: the stingray.

It's not entirely incorrect to think of stingrays as flattened sharks. To be sure, they have their share of differences:
a) position of gill slits (on the side for sharks, on the underside for stingrays),
b) presence of spiracles (bottom-dwelling rays use this instead of their mouth for sucking in water to push over the gills), and
c) body plan (flattened with pectoral fins attached to head: stingrays, torpedo-shaped: sharks).(1)

However, these differences are trivial compared to what they have in common:
a) cartilaginous skeletons,
b) 5-7 gill slits,
c) dermal denticles,
d) an upper jaw not fused to the skull,
e) several rows of teeth which are continually replaced,(2)
f) no swim bladder, and
g) an ancient common ancestor from which they both branched off (Jurassic period, circa 150 million years ago).(1)

Plus, there are some elasmobranchs that blur the lines. Angel and wobbegong sharks are flat and have spiracles, but they're not rays. Then there are sawfish (which are rays) and sawsharks (which are sharks), but both have flattened forward ends and torpedo back ends. And next time you're web surfing, check out the shark ray; some scientists think this guitarfish is (a clue to) the missing link between sharks and rays.(2)

And stingrays are not completely excluded from legend. The ancient Greeks and Romans greatly feared the stingray's venom. Roman author and professor of rhetoric, Aelian, wrote that stingray wounds were incurable. Roman naturalist Pliny the Elder stated in his Natural History that the spine was capable of killing trees, piercing armor, and corroding iron. The Greek poet Oppian even claimed that the venom could dissolve stone. In Greek mythology, Hercules apparently lost a finger to the bite of a stingray (though I'm sure I don't remember that from the Disney movie), and Telegonus (accidentally) slew his father, Odysseus, with a spine-tipped spear.(10) Unfortunately, stingrays had their ten minutes of fame before Hollywood could dig their fingers in.

There are two types of stingrays: benthic (bottom-dwelling) and pelagic (swimming). Benthic types are more generally implicated in coastal scuffles, so they're our main focus. Unlike most elasmobranchs, many species of stingrays are euryhaline (capable of living in waters of a wide range of salinity). In fact, a population of Atlantic stingrays in Florida's St. Johns River lives completely in freshwater, though they still retain their ability to return to saltwater, should the instinct arise.(3)

Mostly, what people find important about stingrays is, of course, the sting. The venomous spine on pelagic stingrays is located near the base of the tail, possibly to discourage predators from taking a bite out of the central portion of the body. In contrast, the spine on benthic stingrays is a little farther away from the body, making it a more effective striking weapon. The spine itself is thought to be a modified dermal denticle. Note: the strike of a stingray is defensive, ONLY (and an involuntary response to boot). This animal will NOT seek you out and attack.(3) Generally speaking, if a benthic stingray is disturbed from underneath, it will just swim away. It's when you step on one that you might get into trouble. But really, who wouldn't be upset if you stepped on them? To avoid this faux pas, just scoot your feet along the bottom in a polite shuffle; the stingray doesn't get a toe in its eye, and you don't get a spine in your calf. If there is a misunderstanding, hot hot water is the best on-the-spot remedy. (And the quickest source of hot water out on the bay is the "tell-tale" or "tattle-tale" stream from a running outboard engine.) Since the venom, produced by tissues in two ventral grooves along the spine, is protein-based, it is inactivated by exposure to high temperatures.(3)

Benthic stingrays have a benthic diet. Though dietary items differ depending on geographic location, typical prey consists of polychaete worms, tube anemones, crustaceans, mollusks, etc. To handle the often crunchy nature of these meals, stingrays have multiple rows of rounded teeth with flat, blunt surfaces for maximum crushing capacity. The exception is during breeding season when the males' teeth develop long, slender cusps enabling them to hold on to the female during copulation. Besides using strong senses of smell and touch to find their (often hidden) prey, stingrays also use their highly developed sense of electroreception. Rows of sensory cells, called the ampullae of Lorenzini, can detect the weak electric fields generated by small, buried creatures. Scientists also believe that male stingrays may use this sense to find buried females during mating season. You can run, but you can't hide.(4)

Stingrays are ovoviviparous, the short meaning and end result of which is they give birth to live young. Basically, the female lays/hatches eggs inside her body; the young develop inside her, but they do not receive nourishment from a placenta. Litters typically consist of half a dozen pups or less (for the Texas coast species). Pups are miniature versions of adults and are on their own from day one.(5)

The Atlantic stingray, Dasyatis sabina, and the southern stingray, Dasyatis americana, both belong to the Family Dasyatidae, or "whip-tailed" rays. You can imagine how that name was inspired… The two species are similar in appearance except the Atlantic stingray has a pointier "nose," and at adult sizes, the southern stingray is much, much larger. While the Atlantic stingray only reaches about 13 inches, on average, in disc width, the southern stingray reaches 79 inches. Dorsally, both species have a color variation between dark gray/green, yellowish-brown, and brown. Ventrally, the coloration is predominantly white or light gray with some of the dorsal coloration spilling over the sides, so to speak.(4,5) The Atlantic stingray's lifespan is approximately 9 years.(6) The southern stingray has managed to elude this question at birthday parties. In marine environments, these stingrays are primarily preyed on by sharks and other large fish species. Closer inland, alligators also occasionally take some a la carte. They are also commonly bothered by various ectoparasites, though rarely infested with them. This due, at least in part, to a symbiotic relationship with cleaner wrasses.(5)

The yellow stingray, Urobatis jamaicensis, belongs to the Family Urolophidae, the "round" rays. Also aptly named. This stingray is also called the round stingray, the yellow spotted stingray, and the maid stingray. It reaches about the size of the Atlantic stingray, measuring in with a disc width of 14 inches. Here's another species adept at avoiding the age question. While coloration can vary widely in this species, the yellow stingray typically displays one of the following color schemes topside: a netlike pattern of dark green/brown on a pale background OR a close-set pattern of tiny white, yellow, or gold spots on a green/brown background. The underside is yellowish- or brownish-white. They share the same predators as the Atlantic and southern stingrays; in addition, the tiger shark seems to have a special fancy for yellows.(7)

Lastly is the token pelagic, Rhinoptera bonuses, the cownose ray. The genus name (Rhinoptera) is derived from the Greek "rhinos," meaning nose, and "pteron," meaning wing. The species name (bonuses) is from the Greek "bonasos," meaning bison. Literally, nose-wing bison. The cownose ray has a conspicuously indented skull (hence, cow). Its body is about one and a half times as wide as it is long (not including tail). The maximum adult size is under debate, but a disc width of 84 inches has been recorded.(8) Females live up to 18 years, while males live up to 16.(9) Dorsally, cownose stingrays are light to dark brown, sometimes with a yellowish tint. Underside, they are white or yellowish white, with some top coloring bleeding over onto the outer corners of the pectoral fins. Predators of this pelagic stingray include cobia, sandbar sharks, and bull sharks. Funny fact: during mating season, a female that is disinclined to breed may sometimes swim with her pectorals out of the water. This species has recently come into the spotlight in some parts of its range for its predation of oyster reefs. Though commercial fishing has been proposed as a possible solution, the harvesting and processing of these rays is no picnic, which could lead to very expensive meat. Additionally, rays are quite vulnerable to overfishing since they mature slowly and have small litters. Cownose rays may sometimes be an inconvenience in some areas, but they are also an important part of the ecosystem (and already listed as "Near Threatened" by the IUCN).(8)

There are about 600 species of rays and skates worldwide; that's more species diversity than any other cartilaginous group of fishes. Rays are a part of most marine ecosystems, and some freshwater ones. Exactly what niche they fill in the health and function of the ecosystems in which they live is not fully understood yet. Maybe their time in the spotlight will come again, hopefully not just in the realm of myth.