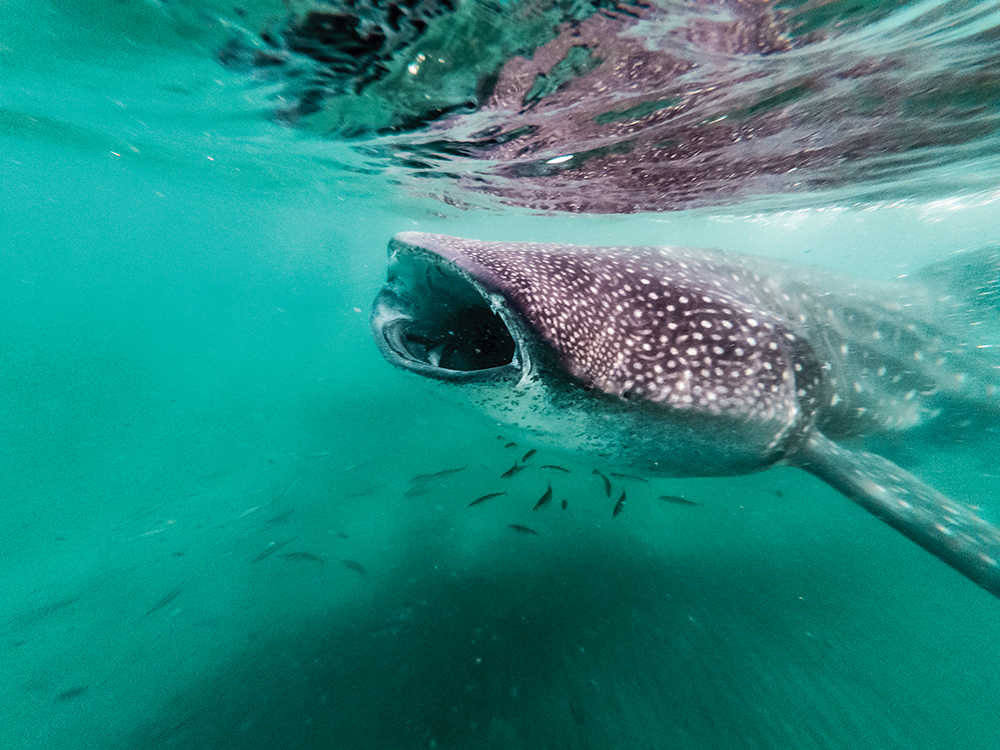 Whale sharks are the world’s largest living fish species. They hail from the order of carpet sharks, Orectolobiformes – a group of attractively patterned, mostly bottom-dwelling species. Commonly reaching over 30 feet long and weighing over 20 tons (larger than a school bus), the whale shark has a streamlined body and a broad, flat head with a mouth that is five feet wide and filled with tiny teeth (about 300 rows in each jaw). Its back and sides are gray/brown with a sort of checkerboard pattern of creamy white spots and stripes, and its belly is white. The function of the shark’s distinctive patterning is unknown. Many bottom-dwelling sharks have bold body markings that act as camouflage through disruptive coloration, so the markings could be a result of their carpet shark evolutionary lineage. Each shark apparently has its own spot pattern, like how zebras each have their own stripe pattern. In fact, whale shark researchers have taken advantage of specialized computer software, originally designed for star mapping, to identify individual whale sharks from photos of their spots. Anyone can upload photos of whale sharks they encounter on the Wildbook for Whale Sharks website. This gives researchers, with their ability to identify individual sharks, valuable migration data.

The whale shark has a very widespread distribution, occurring around the world in all tropical and warm temperate seas, except the Mediterranean. In the Western Atlantic, they are found from New York through the Caribbean to central Brazil. In contrast to most carpet sharks, which are benthic (bottom-dwelling) species, the whale shark is mostly a pelagic (open-sea) species, though they are sometimes found in coastal areas. They spend the majority of their time in the epipelagic (surface) zone, but sometimes dive over a mile deep, possibly to forage. Results from fatty acid dietary studies suggest that meso- and bathypelagic prey may be an important component of their diet. Whale sharks undertake fairly localized migrations, as well as large-scale transoceanic migrations, probably in response to the timing and location of prey populations and possibly by breeding behavior. Scientists believe that some individuals swim across entire oceans just to arrive in time for a plankton bloom or mass spawning of fish or coral eggs. On a daily basis, they swim around 16 miles.

Though whale sharks are solitary creatures, they don’t have any qualms about sharing feeding grounds. They feed on a wide variety of planktonic organisms and nektonic (larger free-swimming) prey, such as small crustaceans and schooling fishes. Occasionally, they even feed on tuna and squids. Phytoplankton (microscopic plants), algae, and kelp have also been found in stomach contents. Unlike most other filter feeders, whale sharks don’t rely solely on ram filtration, in which the animal opens its mouth and swims forward, pushing water and food into the mouth. They can also feed through active suction, drawing water into the mouth, then expelling it through the gills. In both cases, the filter pads separate food from water. These unique, black sieve-like structures are presumed to be modified gill rakers. Food separation in whale sharks is by cross-flow filtration, in which the water travels parallel to the filter pad surface, instead of perpendicularly through it, before passing to the outside. Food particles above 2 to 3 mm in diameter continue to the back of the throat. This is an extremely efficient filtration method that minimizes fouling of the filter pad surface. Individuals have also been observed coughing, a mechanism that is thought to clear or flush the gill rakers of accumulated particles.

Being a suction feeder frees whale sharks from relying on ram filtration. This may be an important adaptation to the relatively nutrient-poor tropical seas they typically inhabit, since the available plankton are smaller and more widely scattered than at higher latitudes. Whale sharks often assume a vertical feeding posture, with the mouth near the surface, and actively ‘pump’ their bodies up-and-down in the water column. (This species has a smaller liver than most sharks and could conceivably control their buoyancy by swallowing air, as do sand tigers). Plankton density is probably sensed by the well-developed nostrils, located on either side of the upper jaw. They may cue in on a chemical released during zooplankton feeding, called dimethyl sulfide (DMS). Or they may notice the splashing commotion created by feeding tunas. This strategy would enable whale sharks to take advantage of the sensory capabilities of entire schools of tunas – using them like a truffle farmer uses a sensitive-snouted pig.

Whale shark reproductive ecology is poorly known. Pregnant females are seasonally found in the Eastern Pacific, but are rarely sighted outside this region. In July 1995, a 35-foot female was harpooned three miles off the east coast of Taiwan. When examined, she was found to contain about 50 empty, thin-shelled egg cases and just over 300 well-formed fetal pups, averaging about 20 inches in length each. (The smallest free-swimming specimen found in the wild, from the Philippines, was 18 inches. Size at birth is therefore presumed to be around this range.) This discovery established that whale sharks are ovoviviparous, a mode of reproduction in which embryos develop inside eggs that are retained within the mother's body until they are ready to hatch; the developing young aren't nourished by a placenta. Paternity analysis on a subset of the offspring established that a single male might have sired the entire litter. The large litter size suggests that juvenile mortality in this species is high. A 22-inch pup was found in the stomach of a blue shark captured in central tropical Atlantic waters. Another, measuring 24 inches, was found in the stomach of a blue marlin caught off the northern coast of Mauritius. These and other records suggest that whale shark pups are born in the open ocean and are preyed upon by large pelagic predators, and also offers another possible explanation for their polka dotted design. Such strongly contrasting markings may help schools of newborns to visually coordinate with each other in the vast open ocean. The pattern may also serve to confuse predators. Open-ocean predators, such as sharks and marlins, are highly visual hunters, so the bold markings of a school of pups may have a visual effect similar to a herd of stampeding zebras. Despite such protective measures, it seems likely that only a small percentage of pups reach adulthood. Based on growth band deposition, male whale sharks probably begin sexually maturing around 17 years and females between 19 and 22 years (in the Indo-Pacific). In the Gulf of Mexico, 50 percent of males mature at around 23 feet (based on visually estimated clasper morphology).

Although massive, whale sharks are docile fish and are considered harmless to humans. They are currently listed as endangered on the IUCN Red List (International Union for Conservation of Nature and Natural Resources: a global union of states, governmental agencies, and non-governmental organizations in a partnership that assesses the conservation status of species). According to the IUCN, the Indo-Pacific population is thought to have declined 63 percent over the past 75 years. The Atlantic population is thought to have declined more than 30 percent, and the populations are continuing to decrease. However, they continue to be hunted in parts of Asia. In Taiwan, whale shark meat fetches a high price and this fact has stimulated larger harvests over the years. Fishing for this shark also occurs in the Philippines, particularly in the Visayas and Mindanao areas, providing food for the local fishing communities. Whale sharks are also victims of shark finning, a wasteful (and often illegal) practice involving the removal of the dorsal fin and the disposal of the rest of the shark. The shark is usually still alive when it is tossed back into the water. Unable to swim properly, finned sharks slowly sink and die of suffocation or blood loss.

Fortunately, the predictable occurrence of whale sharks in large numbers in a few places, such as Western Australia where they migrate in the spring, has led to the development of an expanding tourism industry, which makes their value alive higher than their value to fishers. Some regions even manage tourism, such as licensing of a limited number of operated tours. For the economic stimulus, and perhaps because they are such impressive animals, most places around the world offer whale sharks complete legal protection. Additionally, the whale shark is sometimes used as an indicator of waters rich in plankton (and therefore plankton-feeding fish that will, in turn, attract more valuable species, such as tuna) and the overall health of our oceans.

Perhaps the most remarkable thing about whale sharks is that, despite being enormous, commonly encountered, easily identified, and even commercially fished creatures, there is so little known about them. However, as more people come to appreciate the value of whale sharks as a living resource, the movement to protect them (or at least harvest them sustainably) will grow, and our opportunities for learning more about their natural history will improve dramatically.

You know what's scarier than an ocean with sharks? An ocean without them.
~ Conservation International

Where I learned about whale sharks, and you can too!