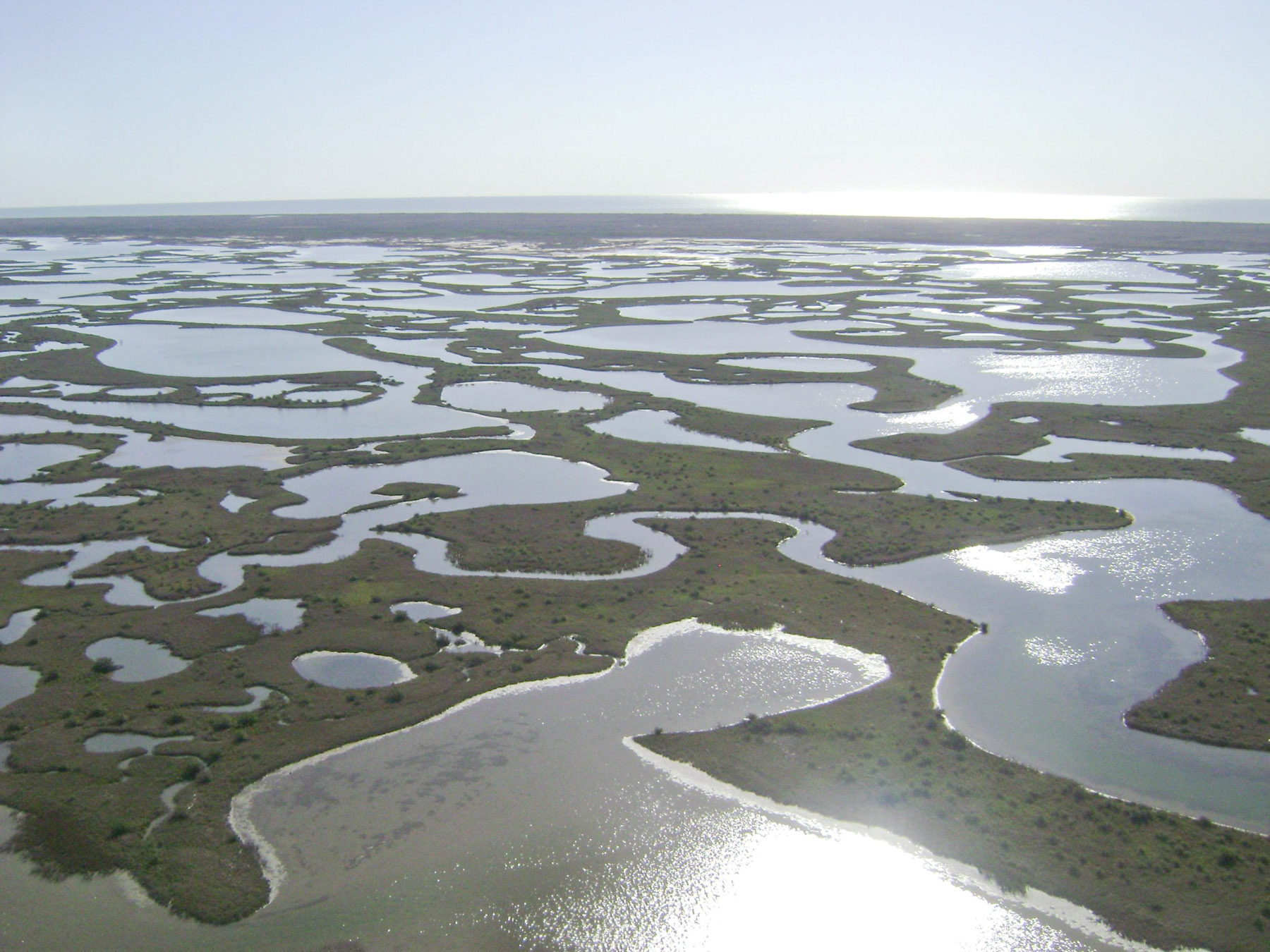 All of Texas affects estuaries and coastal communities. Watersheds feed estuaries and can impact them in several ways. In biological terminology, it would be accurate to say that watersheds are mothers, estuaries are children, and rivers are the umbilical cords.

The most accepted definition of an estuary is a semi-enclosed coastal body of water where seawater is diluted by fresh water from a river or tributary. Freshwater inflows are the key element of that definition. Estuaries are not permanent bodies of water, although the life, or succession, of an estuary is measured most often by centuries. Texas estuaries began life after the last ice age, about 18,000 years ago. As the great ice sheets melted, the sea level rose and filled the vast valleys created by the ice-melt as it coursed toward the sea. These drowned valleys are our Texas estuaries.(1)

Estuaries are complex habitats with numerous components. The main ecological functions of an estuary are serving as a nursery for species that will live their adult lives in the ocean and providing an ecosystem where other species will live their entire lives. The young of numerous ocean-going species go through early life stages within the food-abundant estuaries before moving to the open ocean to complete their life. In contrast, there are species that live their adult life in the estuary, leaving only to reproduce, their young returning to the estuary to mature. Finally, there are many species that complete their entire life cycle within the confines of the estuary. All these life strategies have one thing in common: they depend on estuaries to complete their cycle. This is not surprising since estuaries are widely accepted as the most biologically productive habitats on earth.(5)

Because each estuary is unique, estuarine health can only be known by examination of the historical characteristics of each estuary individually. The health of most Texas estuaries can be ascertained through the study of indicator organisms, such as oysters. However, probably the only way to truly know if an estuary is in its best health is to compare it to what it was like before human intervention. In the absence of this pre-recorded history, scientists use other indicators of health. Each estuary has different characteristics to describe it as healthy. However, a typical healthy Texas estuary has a wide variety of species, a balanced predator-prey population, a healthy border of wetlands, a population of sea grasses, and a healthy oyster population.(3)

Healthy estuaries are of significant economic benefit to coastal communities, and to the state. Commercial and recreational fishing are major sources of income for coastal regions in Texas. Revenue for coastal regions of Texas, and even some inland regions, is dependent on the functional ecosystems of Texas estuaries, and estuaries are dependent on freshwater inflows.(4) Freshwater inflows are comprised of fresh water from rivers, tributaries, or local runoff that drains into an estuary. The most important functions of inflows are diluting saltwater and delivering nutrients and sediments to the estuary (2).

Inflow volumes, like many natural phenomena, are not consistent. They fluctuate from very low during prolonged droughts to very high during floods. The effects of altered inflows can be quite striking. Some effects of above average inflows are decreased saline concentrations via increased dilution, and movement of nutrient and sediment loads farther out into the estuary. Saline concentrations can be reduced from 20-30ppt to 0ppt overnight. For a fish, this would be like drinking black coffee with no sugar if you are used to three lumps and cream. Nutrient levels do the opposite; they go up. Sediment loads carried by the inflows similarly increase, both in amount and grain size. The natural cause of increased inflows in Texas is floods resulting from large rains on the watershed. Floods are natural conditions for an estuary and the endemic marine life have adapted to these conditions.(3)

Below-average inflows are equally change-inducing. They increase saline concentrations, deposit sediment loads closer to the river mouth, and lengthen the salt wedge into the estuary allowing marine predators, parasites, and diseases to penetrate deeper into estuarine waters.(5) This is like being safe one day inside your whole house with the prowlers locked outside, but the next day you're only safe in your bedroom because the prowlers broke in through the back door. Already in some areas, lowered inflows have hurt economic production. Toledo Bend Reservoir in east Texas on the Sabine River, for example, so depleted the freshwater inflows to that estuary that Sabine Lake's historical white shrimp fishery, which was based on the systems late-winter floodings, was all but wiped out. Oyster landings in the Nueces Bay have all but disappeared. These activities were vital economic contributors for those local economies. Human activities such as on-channel reservoir construction and excessive diversion of water from rivers can also lead to drought-like conditions in the river and estuary. As with floods, droughts are one of the natural conditions for estuaries, and the marine life can adapt to these conditions. However, prolonged or permanent drought conditions can cause significant changes in the ecology and water quality of an estuary.(3)

Both floods and droughts serve to test the collective genomes in an ecosystem and ensure that the surviving individuals possess the most favorable genomes for that environment. Floods are short-term detrimental but long-term beneficial with increased nutrients and sediments. Droughts are also short-term detrimental but have no long-term benefits.(3)

For over a century, Texans have squabbled over the water that fuels our estuaries. Until recently, freshwater inflows to estuaries were not universally considered an important use of fresh water, especially during droughts. Officials considered it wasteful to let fresh water drain into the ocean when there were water shortages for municipal, agricultural, and industrial uses. These user groups also fought amongst each other for the water. Because everyone needs water, planning for water distribution is often very contentious. There is an old saying relating to water planning: Whiskey is for drinking and water is for fighting. Nowhere is this more evident than during the SB1 water planning process. The stage was set for a major change in the way Texas partitioned water resources among user groups.(3)

Prior to 2002, all state water plans were produced by the Texas Water Development Board (TWDB) with little or no local involvement. That lack of local input caused problems with the people in the region because they had no say in how their water resources were managed. To solve this problem, the state legislature passed the comprehensive water planning legislation called SB1 (because it was Senate Bill 1 in the 1997 legislative session). SB1 laid out the framework for a new planning methodology. There would be sixteen regions, each with regional water planning groups (RWPG) that would be responsible for the water plan for that area. The new committees included individuals from communities across the state, and the TWDB would be responsible for integrating all regional plans into a state plan. An important aspect of SB1 planning is that each RWPG is mandated to provide for freshwater inflows to estuaries, which are now officially recognized as a viable user of water resources.(3)

The four water user groups that are central to the SB1 process are municipalities, industries, agriculture, and the environment. The environment has only recently been added to planning and is still often not listed alongside the other groups, though the Texas Commission on Environmental Quality (TCEQ) planning rules require the sixteen RWPGs to provide for instream flows and freshwater inflows to bays and estuaries. In 1985, legislation was enacted which required the TCEQ to include provisions for environmental flows in the mandatory permits for diverting river water. This was taken a step further in the SB1 planning process. Now, all water supply projects have provisions developed by recent Environmental Flows planning (and now included in TCEQ rules) that recognize and provide for instream flows and inflows to estuaries.(3)

The unavoidable dispute in water planning has resulted in new water supplies being sought to provide for our growing population while also providing for more environmental protection as mandated by TCEQ rules. Unfortunately, some of these supplies can be environmentally damaging, such as excessive groundwater pumping, on-channel reservoirs, and inter-basin transfers. When the amount of water being pumped out of an aquifer exceeds the recharge from rainfall, it is called mining. Mining reduces spring flow and groundwaters contribution to streams, which in turn reduces instream flows and inflows to estuaries. Also, on-channel dams, the most environmentally damaging of any water supply source, have been proposed on a few tributaries. On-channel means the dam is directly on the river or tributary. These structures interrupt water flow to the estuary, and act as nutrient and sediment traps. An inter-basin transfer (IBT), another supply option proposed in recent planning, is the practice of water from one river basin being piped to another basin. This water may not be available during a drought, however, because IBTs are automatically given junior status in the tributary of origin and put at the bottom of the water-receivers list, according to inter-basin transfer rules.(3) Additionally, this option pulls water from the estuaries, rivers, and people for the benefit of people in another watershed. Obviously, water planning has some pitfalls for estuaries.

There are ample positive aspects of the SB1 water planning process, such as forced emphasis on environmentally friendly water supply options. Water planning rules enhance the ability of RWPGs to provide for the environment. SB1 planning also increased focus on conservation, the least expensive water source, and on new technologies for more efficient water use (e.g. low-flow plumbing fixtures and conservative crop irrigation techniques). SB1 water planning also increased local involvement, which reduces the likelihood of on-channel dams because no one is going to want to give up their land to make room for the resulting lake. Although, on-channel dams are equally avoided for their thorough disruption of the ecology downstream of the reservoir. Plus, there are now open-water-planning and environmental groups that can oppose them. These oppositions were not as easy to accomplish before SB1. As a less environmentally damaging option, water planners have begun offering off-channel reservoirs, which are filled when water is plentiful. Desalination of both brackish ground water and seawater has also received more attention. Desalinated seawater is the most significant drought-proof water supply; however, since it is dependent on energy from fossil fuels, it can be costly if the oil price continues to climb. Combined, the above positive steps could result in much more efficient uses of water and would aid in protecting inflows.(3)

Obviously, how water is used hundreds of miles from the coast can impact estuaries. Rigid rules are in place requiring RWPGs to recognize and provide for freshwater inflows to estuaries, at least at minimum levels. Even so, significant threats remain including on-channel reservoirs and excessive ground water pumping. It is clear that estuarine health involves all Texans, and sometimes other states and countries, such as Mexico, because Texas rivers aren't restricted to Texas soils.

To manage our estuaries and provide for ourselves, we have to recognize what the estuaries need to function and how we can conserve water (and make that conservation mandatory), but we particularly need to recognize that water is our most important natural resource and treat it that way. We should expect and be willing to pay more for water and realize that we are really paying to protect our future. We need to decide if we want to maintain estuaries the way they are, or risk unknown consequences by allowing man-made changes in environmental flows. We also need to choose water supply options that bring about what we want. Finally, to make any of this a reality, we have to let our RWPGs and legislators know how we feel. Anything thats accomplished will be accomplished through them.