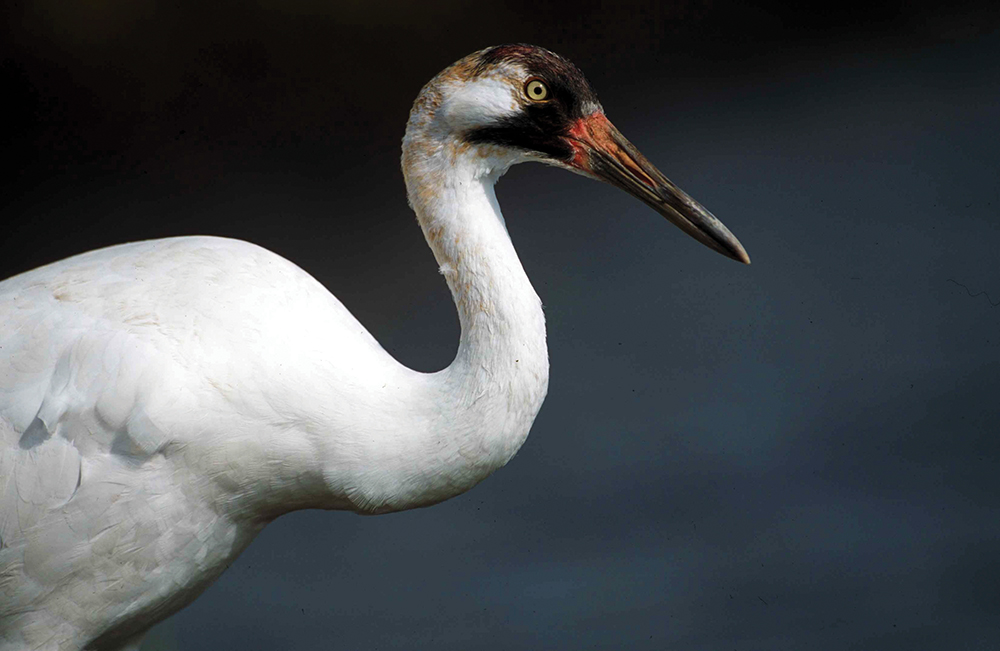 Reaching up to five feet in height, and with a seven-foot wingspan, whooping cranes are the tallest birds in North America. They are named for their resonant call, which can be heard over long distances thanks to a five-foot long trachea that coils twice around the bird's breastbone like a French horn. Most of their height comes from a lengthy neck and long black legs, so it’s not surprising that they weigh in at only fifteen pounds. The bright white feathers covering most of the body are accented by jet-black wing tips (visible only when the wings are extended), a ‘mustache’ of black feathers over the lower face, and an accent of red skin on the head. Their bills are dark olive-gray but become lighter during the breeding season. Eyes are yellow. Juveniles are nearly the same size as adults and have rusty brown plumage in the fall, which molts into the adult white by the following spring. The overall slender body widens to a plump “bustle” at the tail, making them look deceptively big-bodied. In flight, whooping cranes can be distinguished from other large white birds by an extended neck, and legs that trail equally straight behind.

The only remaining naturally occurring whooping crane population winters on the Gulf Coast, primarily in the Aransas National Wildlife Refuge, and breeds in Wood Buffalo National Park, Canada. A re-introduced migratory flock winters in Florida at the Chassahowitzka National Wildlife Refuge and breeds in the Necedah National Wildlife Refuge, Wisconsin. And a non-migratory flock was formed near Kissimmee, Florida, as part of a reintroduction program. At their Texas wintering grounds, whoopers can be found on estuarine marshes, shallow bays, and tidal flats, sometimes venturing to nearby farmland. During migration they stop over on wide shallow river flats. They travel during the day in pairs, family groups, or small flocks, sometimes in the company of sandhill cranes, and after 2,500 miles, finally arrive to their Canadian breeding grounds of prairie marshes and muskeg (swampy coniferous woods with numerous lakes and ponds).

When the winds are favorable, migrating whoopers glide on fixed wings, rather than actively flying. They spiral upwards on thermal updrafts, glide back down, and then spiral upward again on the next draft. This spiraling and gliding is energy-efficient and allows them to fly nonstop for great distances. Whoopers communicate constantly while flying, using loud trumpeting bugles and deep trills. They learn migration routes, traditional stopovers, and nesting locations from their parents (or from researchers in ultralight aircraft, as part of reintroduction efforts). These strong homing instincts limit their expansion to new habitats. Though they travel in flocks, in winter they mostly separate out into family groups, each pair of adults defending a feeding territory against neighboring whoopers.

Whooping cranes are omnivorous, feeding on a range of live prey and vegetation. In their Texas wintering grounds, they feed on blue crabs, wolfberries, crayfish, frogs, large insects, cordgrass, marsh onions, prairie lily, and acorns roasted during the prescribed burns. The Canada breeding population eats mollusks, crustaceans, aquatic insects, minnows, frogs, snakes, mice, voles, aquatic tubers, and berries, while the Wisconsin breeding population eats mostly aquatic animals. Additionally, migrating whoopers eat waste grains including barley, wheat, and corn from harvested fields. Cranes feed by browsing for food, rather than hunting stealthily like a heron; they peck and probe sandy or flooded soils to find prey underground, or outright stab larger prey. While feeding the adults use a frequent low purr to keep in contact with each other.

In early spring, while still on the wintering grounds, pairs of cranes whoop and dance as part of courtship. Whoopers are monogamous, forming pairs at two or three years old. Though they mate for life, individuals will accept a new mate if one of the pair dies. Courting pairs perform an elaborate, energetic dance display in which they leap, flap their wings, toss their heads, and even fling feathers and grass. Dancing intensifies until the birds depart, usually in mid-March. Surrounded by the headwaters of four rivers, the Canadian breeding grounds lie on poorly drained soil interspersed with shallow wetlands. Courtships pick up where they left off in Texas, with loud trumpeting or ‘whooping’ calls that carry over several miles and astonishing leaps into the air by both partners. Pairs choose nest sites in the shallow water of marshes, sloughs, or lake margins, frequently on small islands. They often take advantage of vegetation that hides the nest and incubating parent from predators. Each breeding pair has a territory defended primarily by the male, who attacks intruders by running, flapping, hissing, stabbing, or jumping and slashing with his feet. New pairs often establish a territory near their parents. The pair builds their nest together by piling up and trampling vegetation such as bulrushes, sedges, and cattails. Nests typically measure two to five feet across and have a flat surface or a shallow depression for the eggs. The female lays one to three brown-spotted eggs, though rarely does more than one chick survive to adulthood. Both parents share the task of incubating the eggs, which hatch in about thirty days. Whooper chicks, called colts, are covered in reddish-brown down at hatching and are able to walk and swim within a few hours. Parents communicate with the newly hatched colts with a purring sound. Both parents feed the young, and family groups frequent the shallows of small ponds and marshes, where the parents forage for larval forms of insects such as dragonflies, damselflies, and mayflies, as well as snails, small clams, water beetles, leeches, frogs, and small fish to feed their colts. They can fly around three months after hatching, though they stay with their parents for most of the first year. Whoopers are slow to mature and don’t usually breed until they are four or five years old. In the wild, they live around twenty years. The oldest wild whooper on record, banded in the Northwest Territories in 1977, was at least 28 years and 4 months old when it was found in Saskatchewan in 2005.

All of the whooping cranes alive today, both wild and captive, are descendants of the last fifteen whoopers from the Texas/Canada migratory population that were found wintering at the Aransas Refuge in 1941. A handful more existed at the time in a non-migratory population in Louisiana, but that flock soon died out. Before human interference, there were believed to be 15,000 to 20,000 whooping cranes ranging across North America east of the Rockies, but due to hunting and habitat loss, that number dwindled to around 1,400 by 1860. Thanks to intensive conservation efforts, the whooper’s population grew to about 600 individuals in 2011 (with around 160 of these in captivity). They benefited from the Migratory Bird Treaty Act of 1916, the establishment of Canada's Wood Buffalo National Park in 1922, and the 1937 establishment of Texas's Aransas National Wildlife Refuge. Today's only self-sustaining population migrates between those two refuges.

Scientists recognized the risk of having all the wild whooping cranes in one population. They could be wiped out in one fell swoop by disease, bad weather, or human impacts. Their survival depended on additional, separate populations.  In 1967, the Canadian Wildlife Service and the U.S. Fish and Wildlife Service began captive breeding programs and reintroduction efforts, using sandhill cranes as foster parents. Biologists first tried to introduce a new population in Idaho, but after several years, the population crashed and disappeared. But efforts continued, and three reintroduced populations currently exist, sustained by captive breeding: a resident Florida population, a resident Louisiana population, and a migratory Wisconsin/Florida population. Creating a new migratory flock of whooping cranes required teaching young chicks how and where to migrate. Lacking experienced adult whoopers, the International Whooping Crane Recovery Team decided to use an ultralight aircraft to show the young whooping cranes the route between western Florida and Wisconsin.

Although this species has been saved from extinction for the moment, and populations are increasing, the whooping crane remains the rarest of the world's fifteen crane species. The greatest threats to whooper populations are man-made: power lines, illegal hunting, poorly situated wind turbines, and most especially, habitat loss. Though whoopers are generally safe from hunting, twenty percent of the Florida/Wisconsin population have still been shot. At least 5,500 turbines already exist in the species' migratory corridor and several thousand more are planned. While the areas where the birds breed and winter are protected, they are also isolated and make the entire population vulnerable to any disastrous ecological event. Additionally, biologists have much less information about locations used during migration between Texas and Canada.

Whooping cranes are still endangered, but there is reason to be hopeful with continued intensive conservation. If you are interested in being part of the conservation effort, there is a citizen science project called Texas Whooper Watch that collects information such as migration stopover sites and non-traditional wintering areas (as well as assessing behavior and habitat use, and whether any hazards exist to whoopers at these sites). The project can be found on the iNaturalist app.

Where I learned about whooping cranes, and you can too!

Cornell Lab of Ornithology: All About Birds
www.allaboutbirds.org/guide/Whooping_Crane/overview