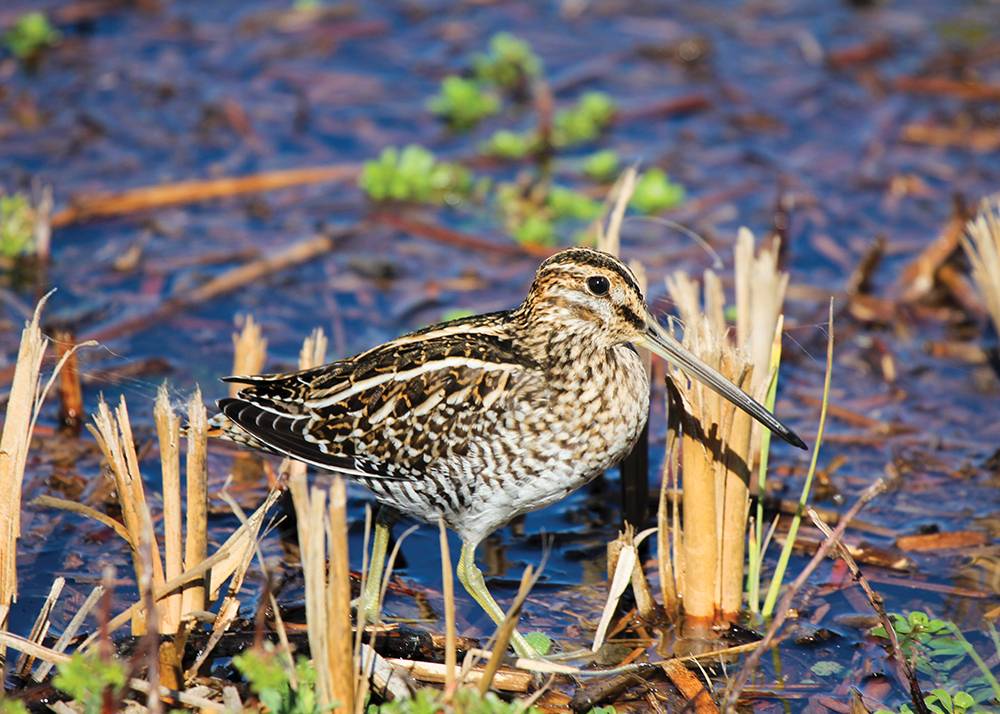 Photo by Jason Crotty at Colusa National Wildlife Refuge. Licensed under CC BY 2.0.

Though the long tradition of snipe hunt pranks has convinced many people otherwise, snipes are, in fact, real – but you’re unlikely to catch them by standing around with a bag in the middle of the woods at night. Wilson’s snipes (Gallinago delicata) are among the most widespread shorebirds in North America. They were once considered a subspecies of the common snipe, an Old World species, but were recognized as a distinct species in 2003 based on morphological and vocal differences. Members of the Scolopacidae family (sandpipers, shalaropes, and allies), Wilson’s snipes are named for the famed American ornithologist, Alexander Wilson.

They breed in Canada and the northwestern United States and winter throughout the rest of the US all the way down to northern South America. While snipes can be secretive and difficult to find, if you search in the right places, you may just find one this winter. You'll have to search in wet, open habitat such as a wetlands or flooded fields, where they can hide in the short, thick vegetation. Look for a plump, mid-sized shorebird with short legs and a long bill. They can be tough to see thanks to their camouflaging coloration. The snipe is mottled brown and black, with prominent buffy longitudinal stripes on both its head and back, and a white belly. The flanks are heavily barred, and its tail, barely visible when the bird is on the ground, sports a rusty-orange band on the distal edge. Males, females, and juveniles have virtually the same appearance, and there is no seasonal variation in plumage. You might not see them until you are right on top of them, when they suddenly flush, often calling a sharp 'scaipe' as they depart in a quick, erratic flight. Wilson’s snipe look stocky partly due to the extra-large pectoral muscles that make up nearly a quarter of the bird’s weight (up to 5.2 ounces). Thanks to their oversized flight muscles, this chunky sandpiper can reach speeds estimated at 60 miles an hour. They are a medium-sized migratory bird, 9 to 11 inches in length with a 15- to 18-inch wingspan. Because their eyes are set far back on the head, they can see almost as well behind as in front and to the sides – they almost literally have “eyes in the back of their head,” a handy advantage when you spend every meal time with your bill in the mud.

Though they don’t nest in our area, Wilson’s snipes are common winter residents from October through April. In Texas, they can appear just about anywhere in appropriate habitat, but data from the Audubon Society Christmas Bird Count indicates the majority of wintering snipe are found along the coast and the Blackland Prairie region, from Waco north to the Red River. They can be found in all types of wet, marshy settings – but when initially looking for habitat that may harbor snipe, think damp over wet. They typically avoid areas where water levels exceed what they can comfortably wade in, or with tall, dense vegetation, though they do need patches of cover to hide in. Look for them in marshes, wetlands, muddy banks of back bays, wet pastures, flooded agricultural fields, etc. Patchworks of small holes in the mud are telltale signs indicating their presence. Wilson’s snipe feed by sinking their bills deep into soft, wet soil to probe for small prey, like a slow-running sewing machine. The bill’s flexible tip can open to grab food while the base of the bill stays closed, allowing them to slurp small prey from the mud without having to pull their bill out. They feed mainly on insect larvae, worms, snails, and crustaceans. Sometimes, they eat small vertebrates, such as lizards, frogs, and fish. Occasionally, they’ll deign to eat leaves or seeds.

This elusive bird sleeps much of the day, tending to be more active around dawn and dusk. If you flush one, it will burst from cover with a raspy call and a characteristic erratic, zigzagging flight that distinguishes it from other sandpipers. As Todd Steele from the Texas Wildlife Association describes, “Have someone take a long hot-dog shaped balloon, fill it with air, and release it in front of you. You have just witnessed the flight of a snipe.” Another distinguishing flight pattern can be heard up north during breeding season. At night, over the nesting grounds, a snipe (usually a male, but sometimes a female) flies in high circles, periodically making shallow dives. During the dives, vibration of the outer tail feathers in the wind produces a whirring hu-hu-hu sound. Many describe the sound of this “winnowing” courtship display as ghostly or haunting. Both males and females winnow as part of courtship or to rebuff potential predators, and males perform the winnowing flight when advertising and defending territory. Males arrive on the breeding grounds 10 to 14 days before females. They establish territories and wait to impress the ladies with their dramatic flight displays. The female chooses the nest site, then makes a shallow scrape and weaves a frame of coarse grasses, lined with finer grasses, to build a nest up to 7 inches across and 3 inches deep. Before and after laying each egg, the female adds a few grasses or sedges from the edge of the nest site. The female lays 2 to 4 brown-speckled eggs and incubates them by herself for 18 to 20 days. Like many sandpipers, a Wilson’s snipe will attempt to distract a predator from the nest or chicks with an elaborate show of feigned injury, fluttering up and falling to the ground, or flopping on its side or breast and beating its wings. The young leave the nest shortly after hatching. The parents split the brood once they leave the nest, each taking one or two chicks. After they leave with their respective chicks, the mates have no further contact. The parents feed the chicks at first, although they start probing for their own food at about 6 days. By 10 days of age, they find most of their own food. The parents continue to supplement their diet until they become independent, around 18 to 20 days. First flight is around the same time. The oldest known Wilson’s snipe was at least 9 years, 3 months old, based on a band recovered from a bird in Canada.

Wilson’s snipe are widespread as a species and overall populations remained stable between 1966 and 2014, according to the North American Breeding Bird Survey. The global breeding population, which is shared between the U.S. and Canada, is estimated at 2 million individuals. Approximately 105,000 were taken annually by hunters between 2006 and 2010 in the U.S. and Canada combined. Wilson’s snipe is only one of two shorebirds that can be legally hunted under the Migratory Bird Treaty Act; the other being the American woodcock, which is similar in appearance, but is mostly a bird of moist woodlands and has a cinnamon belly, as opposed to the white belly and barred flanks of the Wilson’s snipe. The word “sniper” originated in the 1770s among British soldiers in India who hunted snipe as game. Only sharp-shooting hunters who could consistently down the swift, erratically flying birds earned the description. Though the population trend is decreasing, this species has an extremely large range and population size, so the decline has not been deemed sufficiently rapid to warrant concern at this time. For these reasons, the species is evaluated as Least Concern on the IUCN Red List.

Where I learned about Wilson’s snipe, and you can too!

Cornell Lab: All About Birds
www.allaboutbirds.org/guide/Wilsons_Snipe/overview