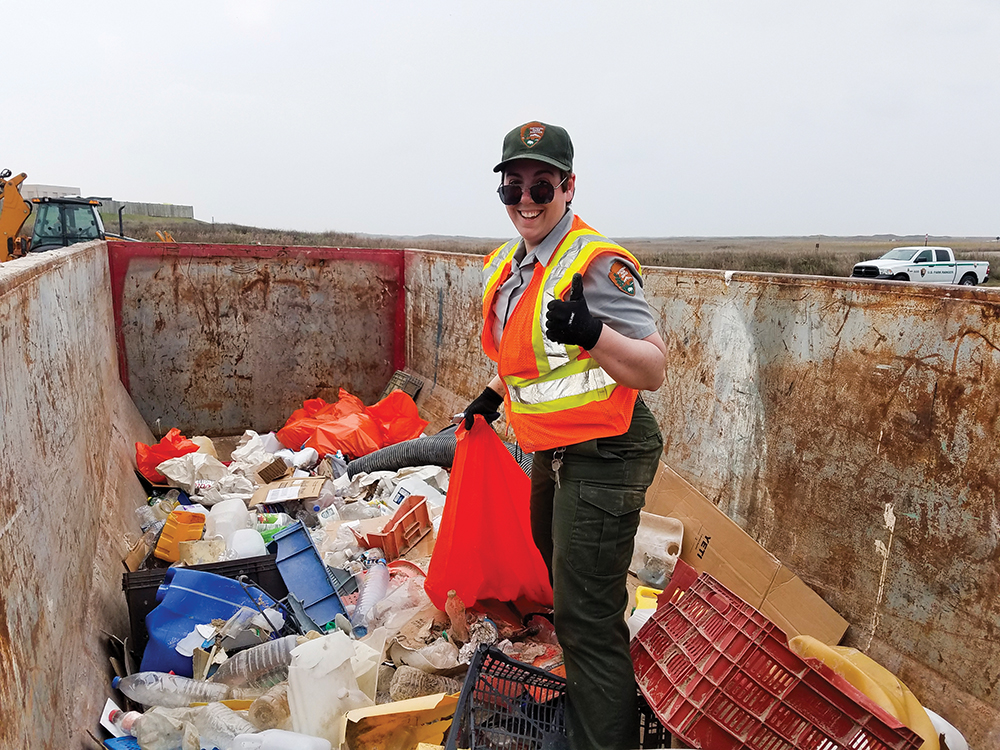 With Billy’s passing last year it was imperative that we not let him down with a poor showing during the 24th Annual Billy Sandifer Big Shell Cleanup. It would be our tribute and crowning achievement to show Billy that no matter what came our way we would not let him down. Not this time! Not on our watch!

The odds were stacked against us early in the game as the partial government shutdown lasted through January. What would we do if the National Park Service couldn’t participate? Contingency plans were made. A meeting was held just after we received notification that the shutdown had ended, temporarily at least, and that we had a two week timeframe to work within before the possibility of another shutdown, just eight days from the cleanup on February 15.

Mark Spier, the PINS superintendent and his staff met with Friends of Padre and we decided to hold the cleanup regardless of another shutdown. Mark said he couldn’t order his staff to work the event but wouldn’t stop them if they wanted to volunteer. Law enforcement was already going to be at work since they’re considered essential staff.

And then another and even bigger problem showed up in the middle of January. Thousands of logs washed in from rivers on the upper coast, completely blocking vehicular traffic from the waterline to the dunes from the 10-mile through the 30-mile area. It looked as though a hurricane had hit.

Quickly, Brian Slate’s park maintenance crew with Big James Carter and Richard Lopez got after the log debris with a front-end loader. Soon after, Nueces County Coastal Parks Director, Scott Cross, lent their front-end loader and Ken and his crew quickly joined the battle, moving logs from the road all the way down through the Big Shell. Concerns of equipment vandalism were removed as Friends of Padre directors, Jeff Wolda, Kevin Eager, and Cody Moravits camped several nights at the 15-mile beach where the equipment was parked after each workday, thus saving precious time that would have been spent running the tractors 30- to 60-miles to reach the work area from park headquarters.

On February 13, Jeff Wolda and I made a scouting trip down Big Shell to check on the progress of log removal. Not only had they cleaned the twenty mile stretch from the 10-mile marker to the end of Big Shell at the 30-mile, they also went all the way to the 41-mile. This opened the possibility that if the tides and weather cooperated we could attempt cleaning all the way to the 40-mile mark. A feat we never even dreamed possible through twenty-three previous Big Shell Cleanups.

After four hours of parking lot prep, trailer loads of traffic cones, barrels, a thousand schwag bags, 20 ice chests loaded with ice and 30 cases of water, snacks for 1200, and 1200 event t-shirts on Friday, we waited anxiously for Saturday morning. I think we all had Billy on our minds making sure we cross-checked everything that needed to be done to avoid disappointing him.

Saturday morning dawned foggy but mild as the section leaders pulled into their prearranged positions where volunteers would fall in behind. Clay Wernli and his crew took off just after 7:00 AM, headed to the 40-mile. This process continued with vehicles streaming into the parking lot as we filled section lines, passed out goodie bags, and sent them down island to their sections of beach. One huge surprise was seeing Billy’s wife, Joy Sandifer, with other of Billy’s relatives, ready to go on her first cleanup. Joy always thought the cleanup was Billy’s show but this day she said she was there to show everyone they were still standing behind Billy and loved and missed him, too!

In spite of my plan to fade into the woodwork doing a TV interview, schmoozing with the Superintendent, passing out supplies and thanking volunteers, we were soon out of section leaders. With 20 groups and 20 miles set to be cleared, I was tabbed to be the twenty-first section leader. Ha!

Normally, grizzled veterans like 2019 CCA Conservationist of the Year, Jay Gardner, and I, hang back and take the last group of students or tired winter-Texans, ending up somewhere near the 15-mile, safe from the potentially worst driving conditions found in Big Shell. Not this time. I was dispatched to clean between the 19 and 20-mile markers, and Jay was sent to work the mile-stretch of beach north of us.

After all was said and done, we ended up recruiting three more section leaders as the last of the volunteers were finally sent south. Sonya Wolda and Lily Walker worked their magic finding all the walking volunteers rides in 4x4s, including 32 students from West Oso ROTC.

Down island, the driving conditions were as good as could be hoped. The beach was narrow in spots and somehow a 16-year-old driving a new Camaro managed to fall in behind Jay’s group after heading down Park Rd 22, bypassing our 4x4-only check in the parking lot, and onto the beach as the group headed south.

A fisherman in a tight spot near the 8-mile made everyone drive into the loose stuff to get around him and that’s where the fun began. The Camaro got stuck. Jay and crew checked out the situation to see what they could do. As soon as the driver and passengers got out of the still running vehicle one of them locked the door. All windows were closed and the car was still running in drive, wheels still spinning. Jay did the only thing he could and that was to continue to lead his group further south to the work area. No knucklehead was going to stop the cleanup effort. Jay notified the ranger who was patrolling a few miles away; a situation had developed that only a ranger could handle.

A new record of 1400 volunteers worked like a well-oiled machine throughout the day, cleaning a record 25 miles of beach from the 17-mile to the 40-mile beach, with another two miles cleaned on either side of the 10-mile marker. It could not have run any smoother and what an honor to the man who started this whole thing back in 1995. We should all be proud.

A total of 75 tons of trash were removed from the PINS beach, shy of last year’s 85 tons, but from more miles of beach than ever accomplished in twenty-three prior Big Shell events.

Some of the more interesting finds included three rattlesnakes, one coachwhip snake, and one of the wildest pieces of medical waste we’ve ever seen in 24 cleanup events – a mass of partially melted hypodermic syringes, presumably from a medical waste disposer that did not process them correctly. Fortunately no one was harmed by the medical waste or the snakes, nor were the snakes harmed.

If you liked Billy’s articles over the years in this magazine about his supernatural experiences on the PINS beach – the Karankawas, Ghost at the 33, Indian flutes, etc. – you might find this next bit interesting.

Sunday, the day after the Big Shell Cleanup, I placed a call to my sister on my cell phone to tell her of the great success we’d had the day before. I went to my contacts list and found her number, but when I dialed it the name switched from hers to Billy Sandifer, whose number is still in my contacts list. I immediately hung up and went back to the contacts list to make sure I hadn’t misdialed. Her name appeared for the second time but when I pressed the dial command it switched again to Billy Sandifer.

No misdial, and no explanation how it could happen, I even made a screen shot of it (see photo). Billy’s name appears above my sister’s phone number. When the call connected, even though I was hoping it would be Billy on the line, it was my sister. I know this sounds crazy but all I can think is that Billy was letting me know he was watching over Friends of Padre and he was proud of us and all the Big Shell volunteers. As Billy would say, “Pretty cool, huh?

Many thanks to fellow cleanup volunteer, Kurt Obersteller, who works at Yeti for bringing this new partner to our event. The Yeti tumblers and Load Out buckets were a huge hit.

To our largest and longtime supporter, Mr. Leon McNinch of the Ruth Parr Sparks Foundation of Alice, TX; we thank you for helping us continue our mission dedicated to the preservation and betterment of North Padre Island and the people and wildlife that call it home.

Curtis Mai and Sharkathon have been one of our biggest supporters and friends for years – Thank You! Ditto, to our partners in conservation at Corpus Christi Chapter CCA Texas for hotdogs and volunteers, and John Blaha at CCA Texas for the schwag bags.

Michael Laskowski Sr. and Jr. of Trac-Work Inc. has been our glove supplier for more than a decade. Brian McKinsey is our Support Leader and “Vehicle Puller Outer” down island. In addition to that role, Brian bought ads in various publications and purchased billboard space along South Padre Island Drive and I-37 in Corpus to publicize this event.

Thanks to Troy Adler, Friends of Padre board member, who takes charge of all of our section leaders every year, parking lot supervisor and Friends of Padre president, Aaron Baxter and his minions – Dree Baxter, Sagan Baxter, Val Chilton, Jessica Aroyo, Willie Rivera, Matt Snowden, Scotty Groza, and Cliff and Courtney Johnstone, who helped with food service and t-shirt wrangling. And special thanks to Jacob Augs for the awesome coyote-themed artwork for this event and for the wonderful video he shot of the 2019 Cleanup, which is up right now on our home page at friendsofpadre.com

Here’s hoping to see you all on Saturday, February 29, 2020 for the 25th Annual Billy Sandifer Big Shell Beach Cleanup. As Billy would say, “Life’s a hoot. Get you some of it!”