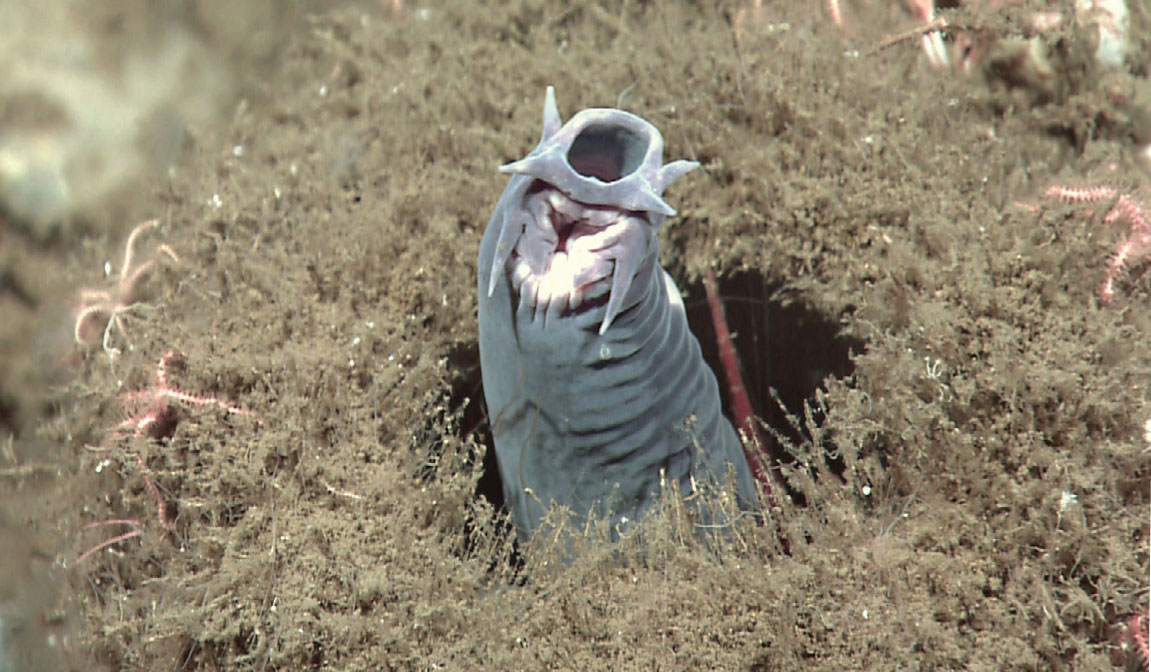 A hagfish’s head protruding from a sponge. Credit: National Oceanic and Atmospheric Administration, Okeanos Explorer Program.
The hagfish is one of those animals that scientists aren’t quite sure how to classify. These bottom-feeders have a skull but no backbone. Like lampreys, they have no jaw, but then lampreys do have vertebrae. Hagfish look like eels, but with naked skin instead of scales. They can survive up to 36 hours without oxygen — while their hearts keep beating — and they’ve been around for more than 350 million years, long, long before the first dinosaurs ever walked the Earth.

In fact, it’s their hidden defense mechanism that has largely enabled them to survive so long — and it’s what interests scientists the most — slime. About 100 glands along a hagfish’s body produce a dense gel that rapidly expands into a huge mass of slime when it mixes with sea water. This gel can suffocate any predators that attempt to take bite out of a hagfish.

Scientists are studying the strong, stretchy, hair-like protein fibers that make up this gel with hopes of learning how to imitate it. If they can create a similar substance, the range of possible applications is vast: from absorbent material in disposable diapers or sanitary napkins to wound dressings, from contact lenses to drug delivery systems, and from culturing cells to repairing human tissues.

Even if researchers can’t recreate such a gel, finding a way to harvest the hundreds of miles of gel fibers inside a single hagfish may provide an alternative to synthetic fibers such as nylon and lycra, both of which require oil to manufacture. Either way, scientists have a lot to learn by studying these ancient, fascinating creatures.