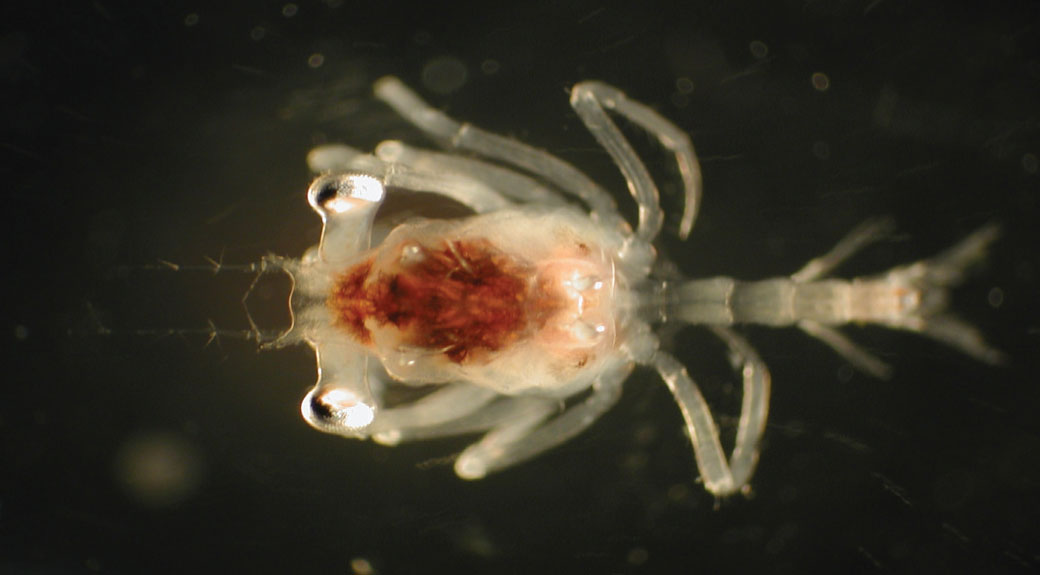 Zooplankton, crustacean larva seen under a microscope. Credit: National Oceanic and Atmospheric Administration, photographer: Matt Wilson/Jay Clark.
Tiny marine creatures known as zooplankton feed on phytoplankton, which use photosynthesis to create their food. Since phytoplankton tend to hang out at the ocean’s surface to absorb the sun’s energy, zooplankton head there for their meals each night. But when morning arrives, zooplankton become targets for predators, so they move to deeper waters during the day.

This daily dive and nightly rise to the surface, called daily vertical migration, occurs in both marine and freshwater environments across the globe. But what happens in the Arctic when the frigid winter brings several months of darkness? Even without a cue from the sun, zooplankton make their moves — by following the light of the moon.

Instead of migrating every 24 hours — a solar day — zooplankton in the Arctic winter migrate vertically once every 24.8 hours, corresponding to a lunar day. When the moon rises above the horizon, the zooplankton that have been feeding near the surface during the sunless day descend to deeper waters to avoid predators. In fact, every 29.5 days in the winter — on the night of a full moon — they go as deep as 50 meters. Researchers first noticed zooplankton’s nightly swimming treks in one particular Arctic fjord, but they have since discovered that it occurs
throughout the Arctic.

This daily vertical migration serves a larger ecological purpose as well; it moves carbon — the main element in all living things — from the surface to deeper waters where other animals can use it. But for zooplankton, this daily — or nightly — migration is all about survival.