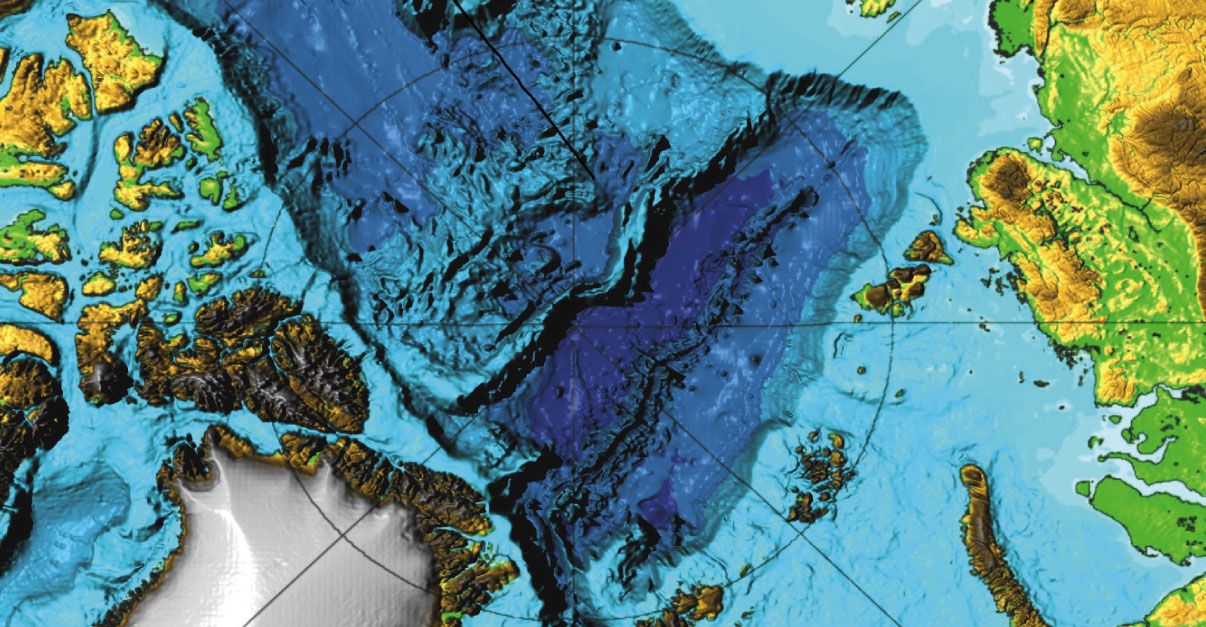 The Gakkel Ridge is the dark line in the center of the map above. Credit: National Oceanic and Atmospheric Administration.
Deep below the Arctic Ocean lies a mid-ocean ridge system that meanders for 1,100 miles along the sea floor. Mid-ocean ridges, essentially underwater mountain ranges, form when magma rises up from deep within the Earth to fill the gap between two tectonic plates that are moving away from each other. At the northernmost section of this ridge system is the Gakkel Ridge, rising up between the North American Plate and the Eurasian Plate.

The plates surrounding most volcanic ridges move relatively quickly — up to 7.5 inches a year — but the plates forming the Gakkel Ridge move apart at less than 0.4 inches a year, leading scientists to suspect that the oceanic crust there would be thin and volcanically  inactive, as it usually is near slow moving plates. But that was before they had a chance to actually study the ridge, which lies three miles below the ice covered sea surface.

Named for Soviet explorer Yakov Yakovlevich Gakkel, who predicted in 1948 that an undersea ridge existed between Greenland and Siberia, the Gakkel Ridge remained a mystery until the research icebreakers Polarstern and USCGC Healy set off in August 2001 to spend nine weeks mapping the sea floor using sonar.

To their surprise, the researchers found so much hydrothermal activity that they thought their instruments were malfunctioning. Despite having a thin crust, as researchers had predicted, the Gakkel Ridge turned out to be one of the most volcanically active sea ridges in the world. The combination of a thin crust with hydrothermal vents and so much volcanic activity is unusual, but the discovery helped scientists revise their understanding of the ocean floor — and realize how much more there still is to learn.