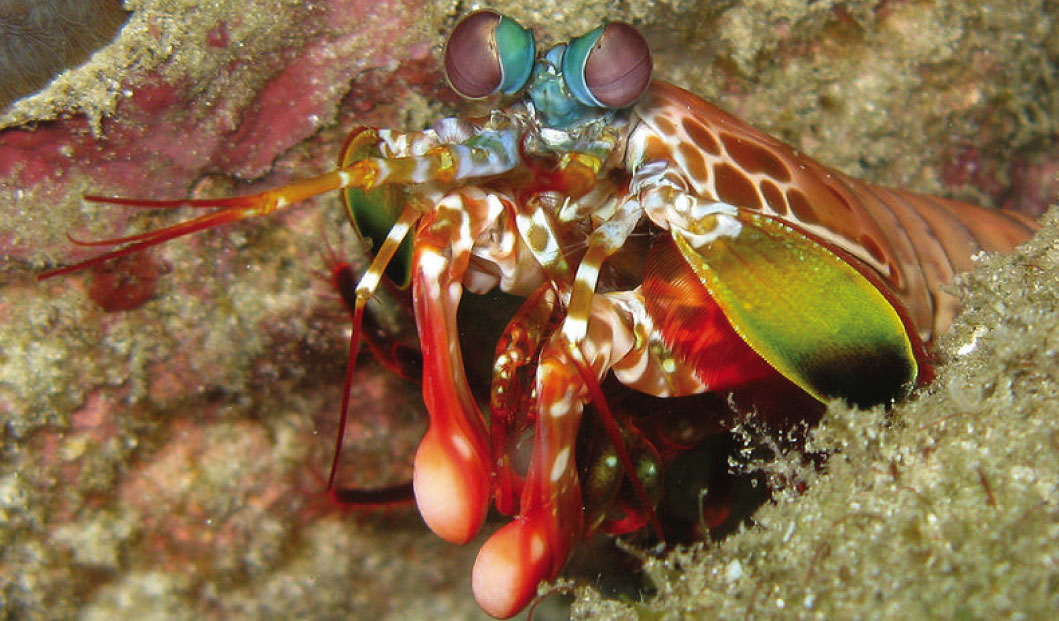 Some mantis shrimp smash their prey with a powerful claw. Credit: Silke Baron, Wikipedia.
It can move almost as fast as a speeding bullet and packs a punch powerful enough to break aquarium glass. Mantis shrimp aren’t your average cocktail shrimp – technically they’re not even shrimp.

The approximately 400 species of mantis shrimp are divided into two groups, the spearers and the smashers. The difference is the kind of formidable claw they use to catch their prey. Both types of these often colorful crustaceans are excellent hunters, but the smashers are a lot faster. They lie still waiting for a snail, crab, clam or oyster to come within range. Then, the mantis shrimp pound their prey with an acceleration up to 10,000 times the acceleration of gravity, reaching speeds up to 50 mph in as little as 2.7 milliseconds! Though not the mantis shrimps’ usual meal, even octopus and larger fish can be stunned to death by the shrimp’s smasher claw.

The secret to this power and speed is a saddle-shaped structure in their arms which acts like a spring. It’s compressed when the arm is “cocked” under the shrimp. When the shrimp is ready to pounce, this spring mechanism releases its stored energy in a burst that propels the claw out, similar to a catapult launching its goods.

But the claw’s power also takes a toll. During its punch, the claw’s speed heats up the surrounding water, causing a pressure drop that forms bubbles, which then immediately implode when the pressure normalizes – a process called cavitation. Cavitation is so destructive that
it can wear down boat propellers, and it wears down the heel of the smasher claw. So, the smasher mantis shrimp molts every few months. Each molt provides it with a brand new claw surface, ready to pulverize its next meal.