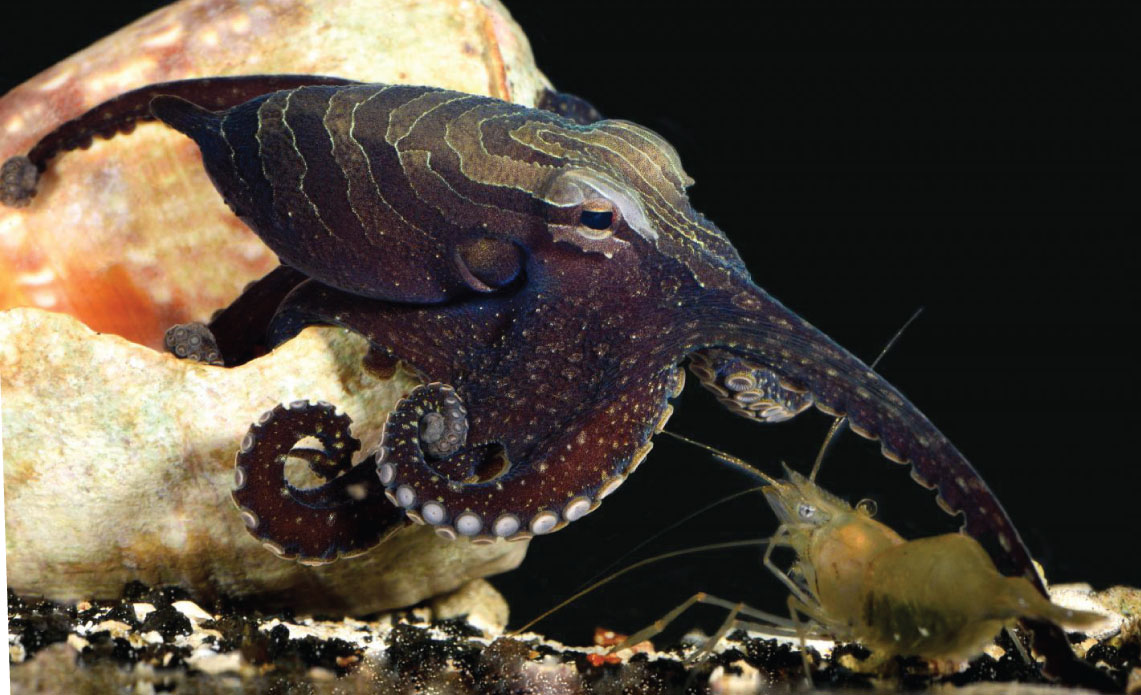 The larger Pacific striped octopus has a unique hunting style. Credit: Roy Caldwell/UC Berkeley
Of more than 300 species of octopuses, a few outliers are bound to do things a little differently. Meet the sneaky — but surprisingly social — larger Pacific striped octopus, who has some unconventional ways of taking both his meals and his mates. While most octopus species seize their prey with all eight arms before the critter can escape, the Pacific striped octopus scrunches itself together and stealthily approaches its prey from behind. It then extends just one tentacle to tap the prey, such as a shrimp, on its far side. The arm tap so startles the shrimp that it heads right into the octopus’s other seven arms.

This octopus shows similar boldness in its sex life. Instead of males staying at arm’s length from a female when providing sperm — lest she become suddenly aggressive — pairs of Pacific striped octopuses sometimes move in together. A male and female might stay in the same den for several days, partaking in daily full-contact sex in which they embrace, sucker-to-sucker, and touch their beaks together as though kissing. Sometimes the female wraps her tentacles all around the male with his own tentacles bent backward over his head.

In fact, mating and meals sometimes go together for this species. Scientists observed one mating pair that appeared to share their food beak to beak, not unlike Disney’s Lady and the Tramp sharing spaghetti, something never observed in other species of octopus. And instead of dying after laying a single brood of eggs, as most octopuses do, the female Pacific striped octopus may lay eggs over several months. These fascinating behaviors have reminded scientists how much they still have to learn about different octopus species.