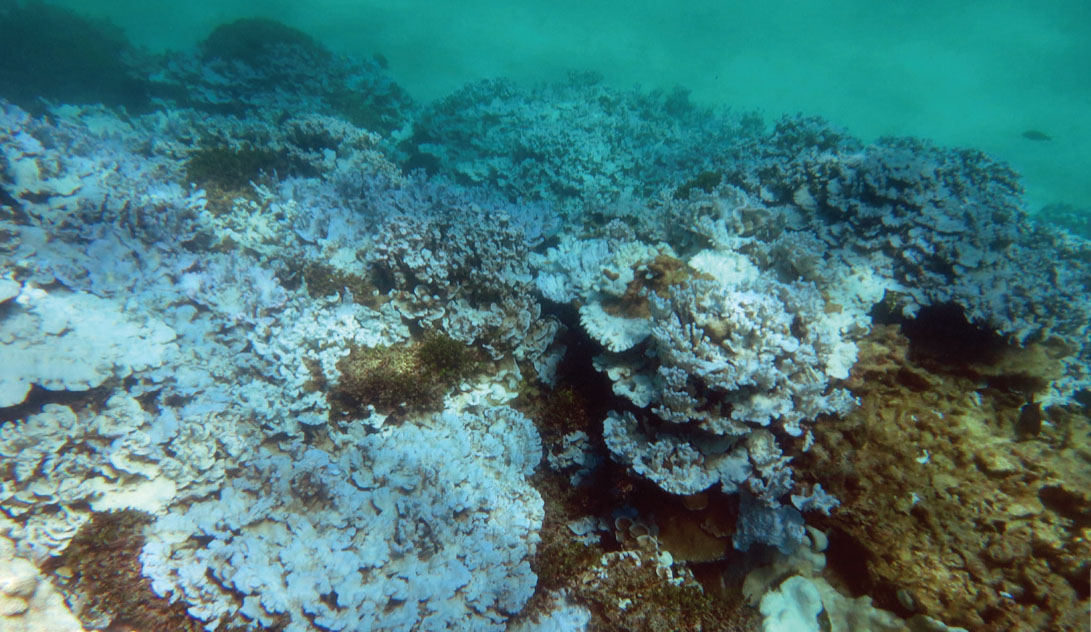 Severely bleached coral in Papahanaumokuakea Marine National Monument, Hawaii. Credit: National Oceanic and Atmospheric Administration.
Carrying a bit of extra fat isn’t usually considered ideal among the human population, but for corals, extra fat could be a lifesaver. The more fat reserves a coral has, the stronger its recovery appears to be after severe stress.

One of the biggest threats to corals is bleaching, which results from the stress caused by changes in light, nutrient availability or temperature. Microscopic algae called zooxanthellae live in coral tissue. The coral and algae live symbiotically, depending on each other for survival. The coral obtains much of its energy from the sugar made from the algae’s photosynthesis. But when they experience severe stress, corals expel the zooxanthellae, which leaves them pale or even white and more vulnerable to disease or harm from storms.

As climate change has warmed the seas, coral bleaching has become more common and ocean ecosystems have suffered from increasing coral death. But corals can recover from these bleaching events and having more fat storage helps. Scientists exposed three coral species — finger coral, boulder coral and mustard hill coral — to elevated temperatures for two and a half weeks to induce bleaching. When they tested them six weeks later, the finger coral was in the best shape — and had the largest fat reserves. The animal in the poorest shape was the mustard hill coral, which stored the least amount of fat.

Scientists suspect the fat helps the coral because it provides energy to make up for the sugar lost as a result of the departed zooxanthellae during a bleaching event. Less fat means greater difficulty healing from the bleaching. Knowing this can help scientists predict how a coral reef will fare with the expected increase in bleaching events.