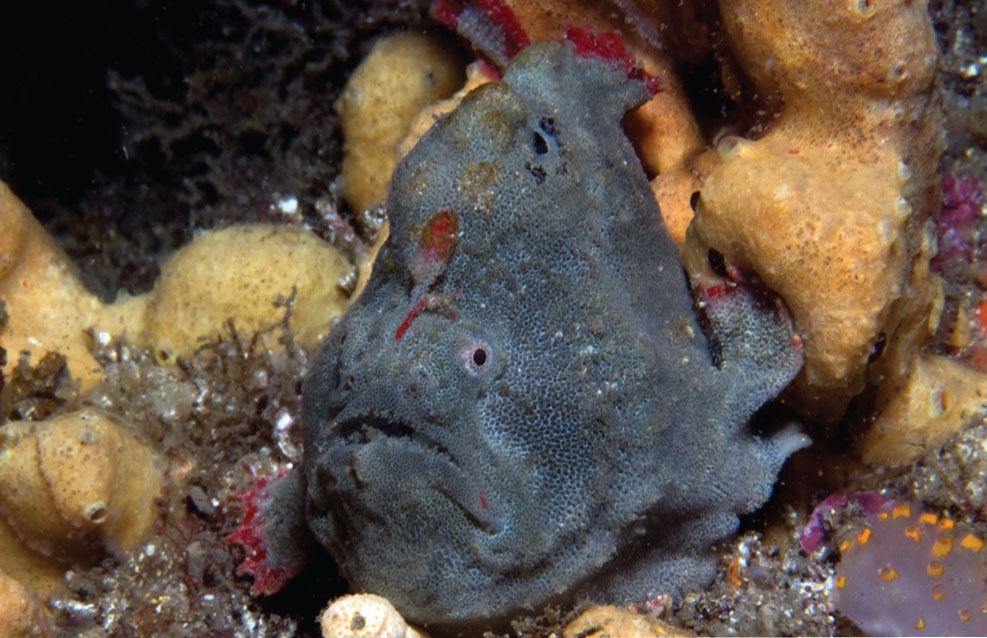 The red-fingered anglerfish can change color to hide from prey. Credit: David Harasti
Many predators hunt by camouflaging themselves and waiting for unwary prey to swim close enough to become a meal. One species of frogfish managed to hide from scientists, too. Only in 2015 did researchers rediscover this color-changing critter dwelling in tropical and subtropical waters and determine that it was an entirely new genus and species, Porophryne erythrodactylus. What makes frogfish such successful predators is their ability to completely blend into the sponges and corals where they lay in wait, so it’s incredibly difficult for unsuspecting prey to spot them.

The common name of this new fish, the red-fingered anglerfish, applies to its most distinctive feature: red coloring on the tips of its pectoral fins. They’re also considered so ugly that a mayor in Indonesia once famously called them “the spawn of Satan.” Despite that colorful feature, however, the red-fingered anglerfish’s exceptional camouflage kept it out of scientists’ sights for more than 30 years after the first one was collected in 1980, and later lost.

When divers spotted one in 2005 off the coast of Sydney, scientists from the University of Washington in Seattle and Macquarie University in Sydney set out to find more specimens. They collected three, enough to conduct DNA sequencing and determine if the fish was truly a new species or not. They suspected their samples might contain at least two different new species based on the fish’s differing color patterns. But, the DNA sequencing revealed they were all the same species. They simply have the ability to change from a grayish color to a reddish-pink to an orange color to blend in with their surroundings. That’s some strong hiding ability!