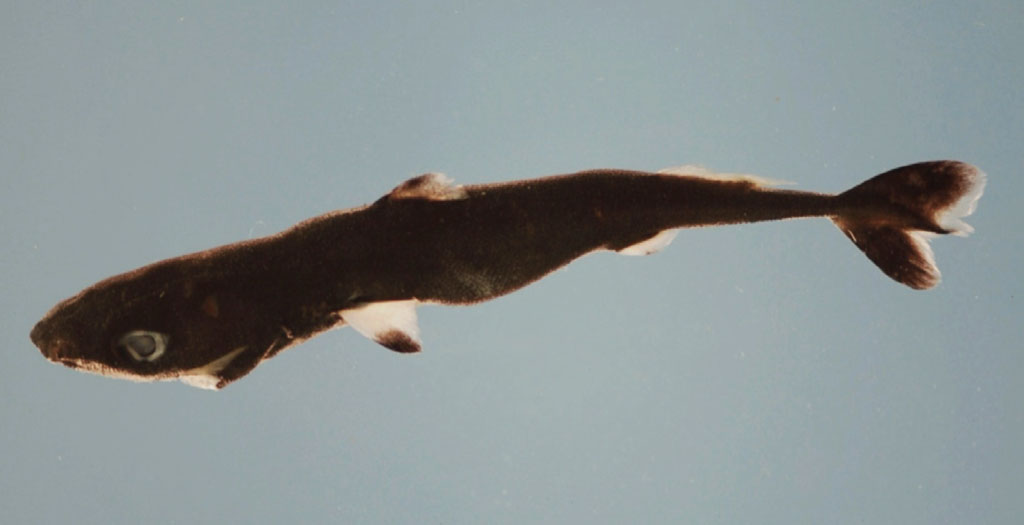 The spined pygmy shark, which is similar to the smalleye pygmy shark, also uses bioluminescense for camouflage. Credit: National Oceanic and Atmospheric Administration.
Not all sharks are at the top of the food chain; some are small enough to be a potential meal for dozens of other species. Diminutive sharks as small as 8 inches long, such as the smalleye pigmy shark, have evolved characteristics to stay off the menu of predators.

The easiest way to attack one of these tiny sharks would be from below. Their dark silhouette against the bluish water above would make them easy to spot. Instead, smalleye pigmy sharks use bioluminescence for camouflage. Organs called photophores on their undersides emit just enough light to create a bluish glow that disguises their outline and allows them to blend in with the blue water above them. Scientists have discovered that the sharks use two different hormones to control the brightness of their glow. The hormone melatonin, the same one that tells humans that it’s time to go to sleep, triggers the bioluminescence and lightens their bellies. Prolactin, the hormone that stimulates milk production in mammals, dims the glow.

Another small shark, the velvet belly lantern shark also uses bioluminescence for its own benefit. It communicates with others of its species in the deep sea by sending messages with its glowing tummy. The two species share a common ancestor, but the smalleye pigmy shark has remained truer to its roots, relying on its bioluminescence solely to hide from predators.