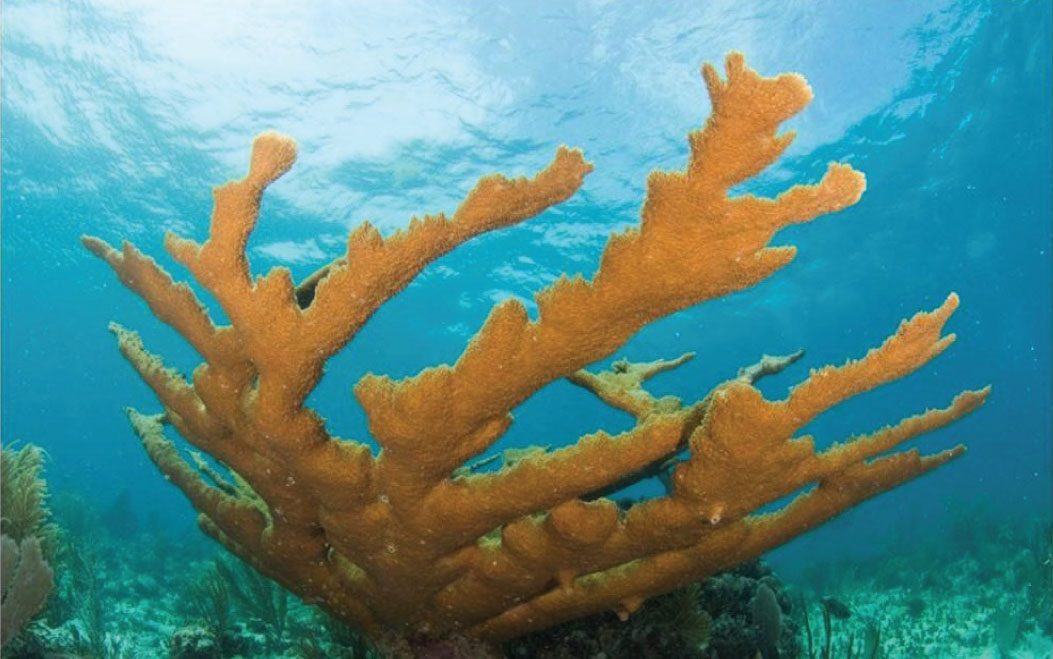 Elkhorn coral. Credit: U.S. Fish and Wildlife Service
Bowhead whales and Greenland sharks can live up to two centuries, and century-old Galapagos giant tortoises are just young adults. But none of these creatures can hold a candle to corals and sponges. Although both corals and sponges look somewhat like plants, they are two very different kinds of animals that can grow to be thousands of years old.

Corals are made up of thousands of tiny multicellular polyps, each an individual organism that feeds on microscopic plankton and tiny fish they catch with tiny tentacles. Corals can reproduce sexually or asexually, and asexual reproduction leads to new polyps with the identical genetic code of the parent. Scientists studying elkhorn corals in Florida and the Caribbean have found that the oldest genotypes of this endangered species have been around more than 5,000 years.

Sponges differ quite a bit from corals, but they stay in one place just like corals. Without a nervous, circulatory, respiratory, digestive or excretory system, sponges depend on the flow of water through them to get food and oxygen and to remove wastes. There is no simple way to estimate the age of a sponges, but size can be an indicator, and the oldest is estimated to be 4,500 years. But now, scientists have found a sponge about the size of a car — the world’s largest known sponge and perhaps the world’s oldest animal — 7,000 feet deep at the Papahānaumokuākea Marine National Monument in Hawaii.

Living for so long shows the hardiness of corals and sponges despite major changes in their environment over time. Human-caused climate change, however, will put that resilience to the test. It’s occurring much more quickly than typical historical variations of climate, and scientists have to wait to see if these ancient creatures can withstand that pace of change.