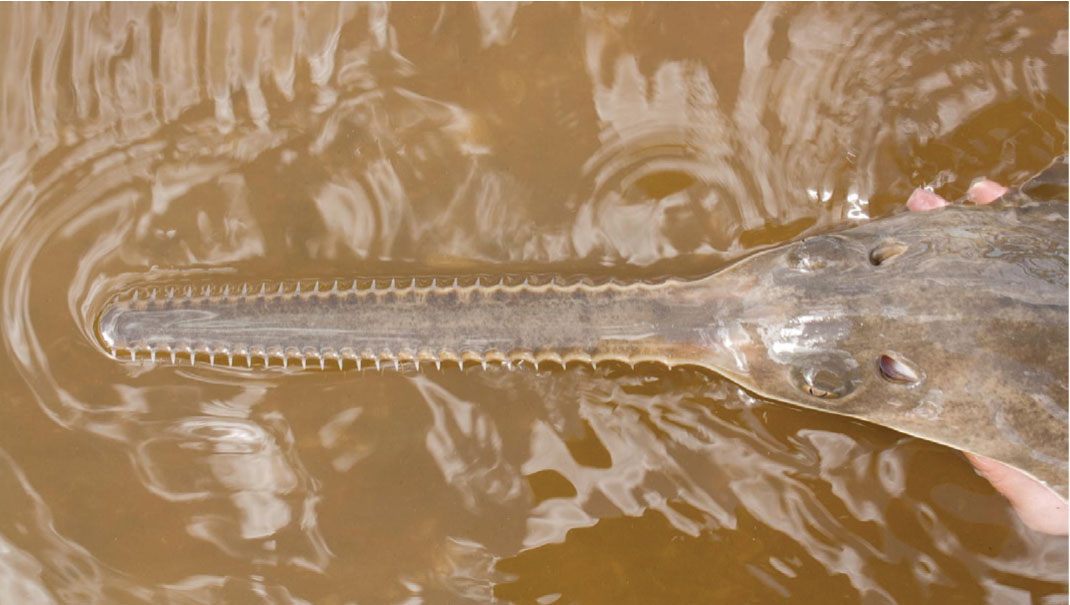 Juvenile smalltooth sawfish in the Charlotte Harbor estuarine system, Florida. Credit: Florida Fish and Wildlife Conservation Commission
If a species on the brink of extinction could learn to clone itself, that nifty trick could improve its chances for survival. And that’s exactly what scientists have discovered some smalltooth sawfish are doing in Florida — reproducing without mating. This critically endangered species is one of five species of sawfish, creatures that look like a cross between a shark, a ray and a chainsaw blade. Sawfish have a long, flat snout with widely spaced teeth that protrude in a line on either side, an arrangement that is reminiscent of a saw.

But these sawfish have been rapidly dwindling due to disappearing habitat and overfishing. Today’s smalltooth sawfish, which live in a couple rivers in southern Florida, represent between 1 and 5 percent of their total population in 1900. Over a period of nine years from 2004 to 2013, scientists captured and tagged 190 of these fish and took DNA samples from them. When the researchers analyzed the DNA, they found that seven of the sawfish had identical DNA. Sexual reproduction creates differences in DNA even between brothers and sisters, so the lack of differences in DNA suggested that some of these sawfish might be reproducing without sex.

Further analysis indicated that female sawfish must have been reproducing asexually through parthenogenesis — giving birth to offspring from unfertilized eggs — and their young were surviving in the wild. Because the sawfish were juveniles, the scientists do not yet know whether those asexually produced offspring can reproduce.

Parthenogenesis is common among spiders, insects and crustaceans, but it is much rarer among fish, birds and reptiles, and it’s especially rare among vertebrates in the wild. Now, the scientists will continue to monitor the smalltooth sawfish to see if this ability translates into a successful strategy for the species’ survival.