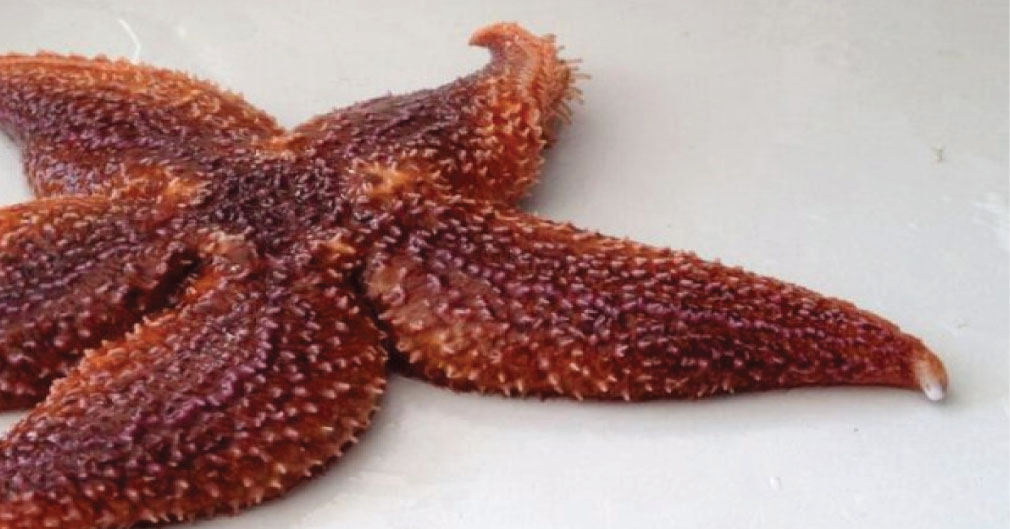 The white object at the tip of this sea star’s arm is being ejected from its body. Credit: University of Southern Denmark
Imagine that every time a veterinarian microchipped a dog or cat, the animal found a way to expel the microchip from its body. It turns out that is exactly what a sea star (aka starfish) does with a foreign object in its body. It pushes the object to the tip of an arm and then ejects it from its body.

Two Danish biology students discovered this trick when they tried to inject tags into sea stars to track them. Within a few days of inserting tags, the tags were shed. To figure out how this happened, the students inserted a magnet with similar dimensions as the tag and used another magnet outside the starfish to track the internal magnet’s position. They also used an ultrasound imager on the starfish to see the magnet’s position.

After about 10 days, the magnet made its way haphazardly past the sea star’s internal organs until it reached the tip of one of its arms. It seems that constrictions of the body wall near the object are what propel the foreign object toward the arm.

This was the first time scientists have seen such a behavior in any animal, so the discovery inspired many more questions about this remarkable ability: Why the tip of the arm? Exactly how are objects pushed out? Do other animals do this? Can a sea star eliminate any object, or does the size or shape make a difference? Does this offer any benefits to a sea star? It will take more observation and research to understand sea stars’ unique ejection ability.