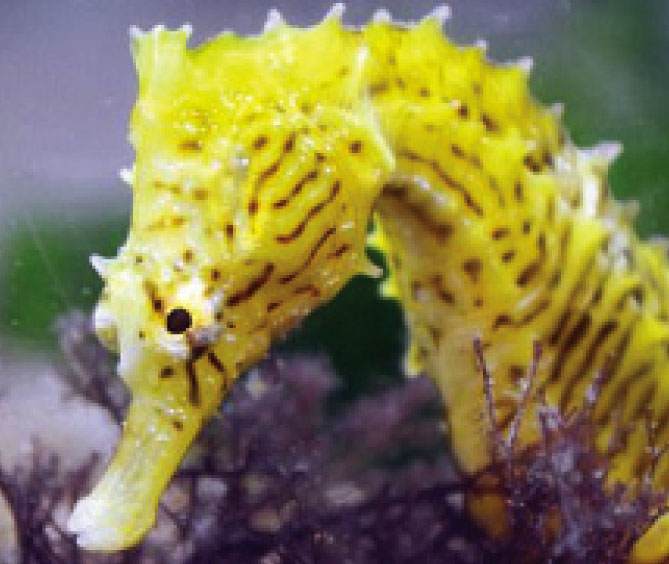 The dwarf seahorse, Hippocampus zosterae, has a head perfectly shaped to sneak up on fast moving copepods. Credit: Brad Gemmell.
Seahorses and pipefish may be beautiful and graceful creatures, but they’re not the speediest of fish. In fact, they swim more slowly than most marine animals, yet they manage to catch some of the fastest prey in the sea nearly every time. Their secret weapon? Seahorses use their unusually shaped heads.

Seahorses feed on copepods, nearly microscopic crustaceans that can bolt from predators as fast as 500 body lengths a second – or the equivalent of a 6-foot human swimming 2,000 mph underwater. These tiny crustaceans rely on detecting water movements to alert them of approaching predators. Within just two to three milliseconds of feeling nearby disturbances in the water, they dart away. But that’s where seahorses have an advantage.

A group of researchers from the University of Texas and Texas Tech learned about the seahorse’s strategy by using laser-based imaging and a high-speed, digital camera to create 3-D holographic images of dwarf seahorses while they hunted. The researchers discovered the shape of the seahorse’s head creates a “no wake zone” which enables the seahorse to sneak up on copepods.

The seahorse’s unusually shaped head has evolved so it barely moves the water in front of its mouth. The copepods therefore cannot detect water movements even as the seahorse moves right up beside them. Once within a millimeter of their prey, the seahorse swiftly jerks its head up and sucks in the copepod in less than a millisecond – before the copepod senses any danger. This “pivot” feeding is used by various species of seahorses, pipefish and sea dragons who share this special adaption for stealthy hunting. Now that’s using their heads!