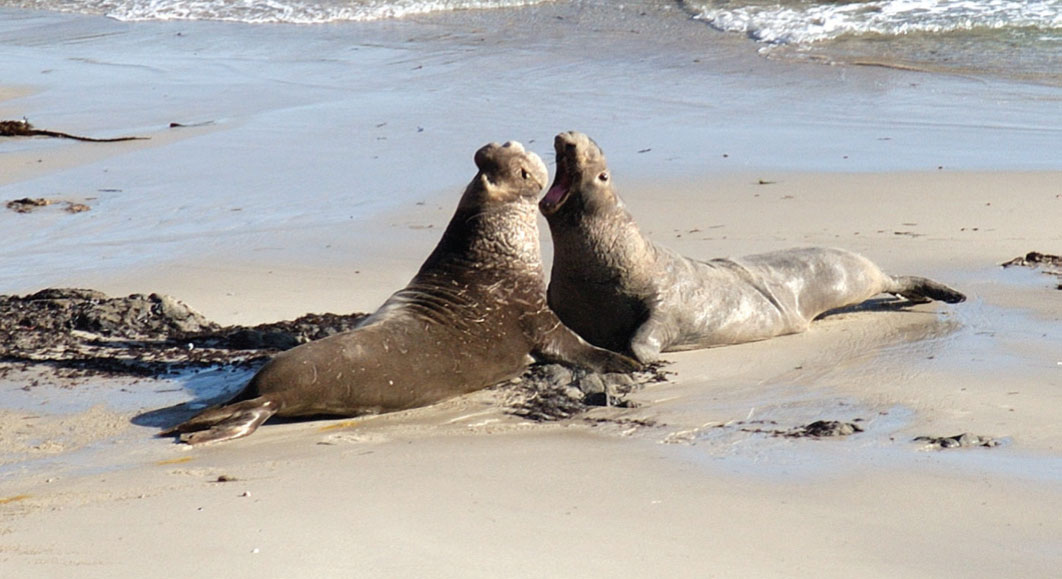 Male elephant seals take competition for mates very seriously, but rarely get into actual physical fights. Credit: Robert Schwemmer, National Oceanic and Atmospheric Administration.
Breeding season can be brutal — even bloody — for male elephant seals. These heavyweights take the competition for mates very seriously, with both vocal and physical threats to other males. Sometimes they rear up to show their height, and sometimes they slam their chests onto the sand to send intimidating vibrations into the ground. But despite all this posturing, actual physical fights occur less than five percent of the time in elephant seal colonies.

The reason, scientists have found, is that each male has a unique vocal call that allows nearby males to identify who he is and where he fits into their very sophisticated social hierarchy. Over a period of four breeding seasons with a colony at California’s Año Nuevo State Reserve, researchers observed male interactions and recorded their calls. When they played back these calls to the colony, male elephant seals became more aggressive when they heard the calls of lower ranking males, but they scurried off without calling back when they heard dominant male
calls.

By playing those calls at another unrelated colony, the researchers learned that it’s an elephant seal’s knowledge of who’s who in his own colony that matters, not the tone, length or volume of the vocal call itself. The call of an unfamiliar male doesn’t lead the seals to fight or flee until they know who he is. Each male’s distinctive call does not change during his lifetime, enabling others to identify who he is and enabling him to avoid unnecessary fights even though he may interact with more than three dozen males each breeding season. So when he does actually fight another male for a female, he’s really in it for keeps.