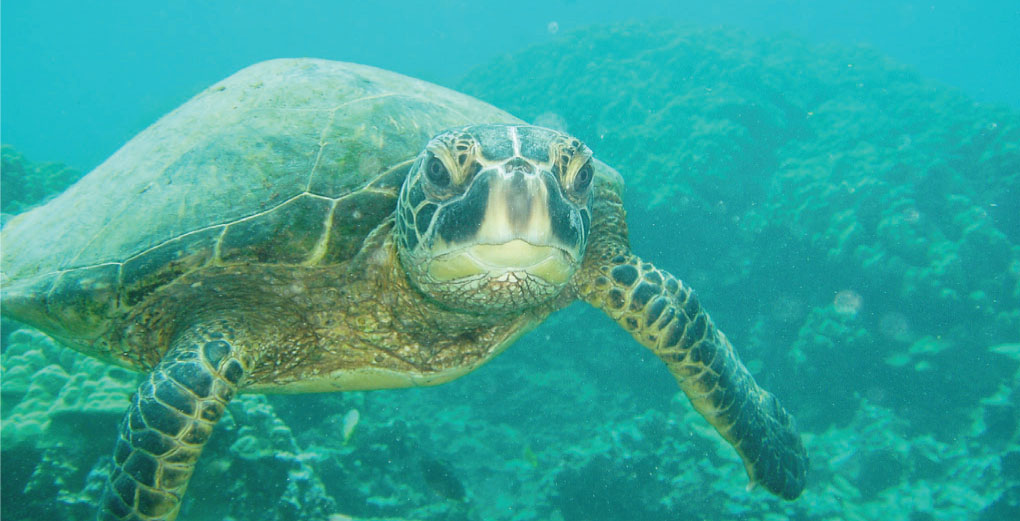 A green sea turtle in Hawaii. Credit: Claire Fackler, National Oceanic and Atmospheric Administration
Shortly after sea turtles hatch and enter the waves, they vanish from sight for the next two to ten years. Scientists often call these the “lost years” because no one is sure where the turtle toddlers go during this time. Until recently, many marine scientists believed the young turtles ride the waves until they gain the strength or navigation skills to actively swim. But scientists wanted to find out for sure, especially since sea turtles are endangered. Knowing where they are going and how they are getting there might make it easier to protect them.

Researchers at the University of Central Florida caught 24 green sea turtles and 20 Kemp’s ridley sea turtles between 6 and 18 months old then attached solar-powered tags to them. Satellites tracked the turtles’ movements for two to three months before the tags detached from the turtles’ shells. Satellites also tracked tiny surface buoys that were placed alongside each turtle when it was tagged and released so that researchers could compare the movements of the buoys with the turtles’ movements.

It turns out turtle toddlers aren’t drifting aimlessly wherever the waves take them. Within a few days, they were sometimes up to 125 miles away from wherever the buoys had drifted. The young turtles were swimming toward habitats that ended up being very hospitable areas for them.

Even from their earliest days, sea turtle toddlers seem to know where they need to go and actively swim to get there.